It’s out of the question that cosplay is the hot topic nowadays. This phenomenon shows the approach of people engaged in costume making which can be compared to the effects achieved by professionals in the movie industry. For us the whole process of making props and costumes is  even more interesting as it leaves a huge space for 3D printing technology and limitless area for creativity. We couldn’t resist not to pick up this topic and share with you our variation of the mask of a classic super hero with all the files available to be downloaded at the bottom of this page. 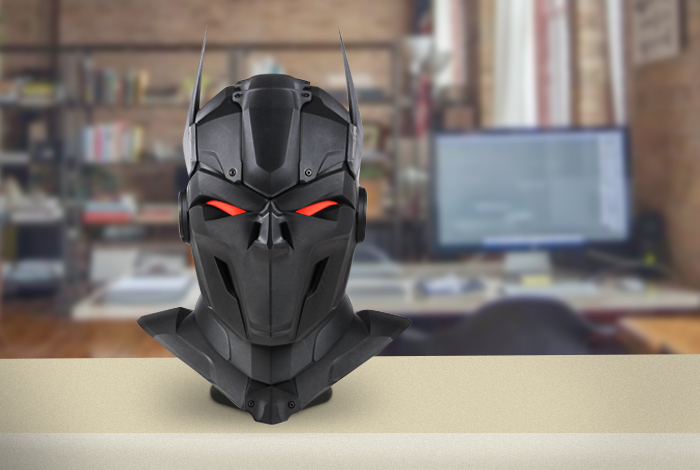 A Fad that Went Global

The special convents are organized to gather the fans of various Anime, fantasy or other popular characters, who would like to take part in the artistic show and play the role of their favourite super hero. Everyone who has ever had a chance to see cosplayers in action knows, that their costumes serve as real trophies and an example of craftmanship involving many hours of hard work. It’s basically because of the level of complexity of each costume, starting from the shield and ending on the details such as eye lenses or wigs. The whole metamorphosis into a chosen character is neither easy nor cheap.

Back of the mask

Cosplayers’ costumes have evolved within times and technology and now, instead of textile and cardboard only, we can see various types of plastics used to reflect the image of the character. There are still lots of people who choose the traditional methods and construct their costumes manually, yet knowing the capabilities of the newest technology represented by devices such as Zortrax M200 or Inventure and seeing the results, we bet that we convince some of you to try and start benefit from it.

The variety of characters, their costumes and attributes is in fact jaw-dropping, however it is not always sufficient for the cosplay fans who sometimes want to switch the gender of a certain character or give it for example a bit more modern or steampunk touch, or some new armour. The similar situation takes place when it comes to creating completely new characters for the purpose of a new movie, or reshaping the images of the well-known figures for the sake of new adaptation. In such cases, thanks to the help of 3D printing users can design each part of their costume themselves and change it whenever they want.  What is more, using a 3D printer can be the only tool that allows to produce elements that are to be made of stiff material or imitate any solid parts that need to fit the user’s body perfectly.

In practice, only 3D printing the custom- made components can guarantee convenience of using and obtaining exact dimensions of an individual. The first thing is taking the proper measurement which is possible by the traditional methods or by using a 3D scanner. Such device is not only ultra precise and can collect data concerning the object’s shape and color, but it allows the digital model to be be imported directly to the 3D printing software and 3D printed. The second thing is choosing the right 3D printer characterized by great dimensional accuracy that is able to reproduce the size and shape of the model, ensuring also the great quality of 3D print.

While thinking over the conception of a cosplay mask our designer Piotr Czyżewski decided to go classic, but with adding the whole silhouette a modern feel, make it more stylish and edgy. The overall look was based on the interpretation of the gothic designed character that was given the anatomical elements of a spine, creating the impression of a solid shield. Multiple parts and layers screwed to the mask shows the overall complexity of the model, and what is even more important, are the proof of the great quality and accuracy of the Zortrax M200 3D printer. By inserting the small led lights behind the hero’s read eyes we obtained the desirable effect of the gloomy and scary look and made an interesting contrast with the overall black mat surface. The use of sharp lines to details like nose, ears or the overall face shape somehow reflect the personality of a comic hero, his roughness and strength. 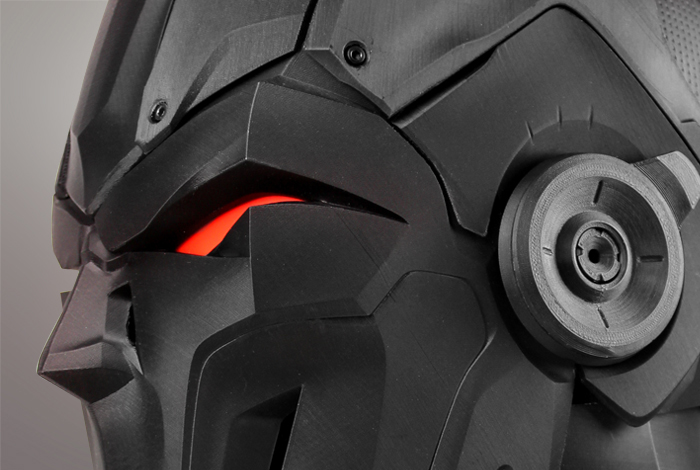 However, the shape and style of the mask could be adjusted to individual taste and preferences. Those who want to look for inspiration or create their own version of this mask, can download the file of super hero mask from the Zortrax Model Library and start working on the project by adding their own modifications and share the final model with the other users.

Inspired by the original version of a popular comic hero, our designer Piotr Czyżewski, created the draft in the modeling program and decided to play a little with the image to make its final version more original and contemporary-looking. After creating the perfect design, he easily exported the file to the Z-Suite slicing software and prepared the model for the 3D printing process by choosing the printing material, layer thickness and type of infill. The whole printing process took about 11 days to finish, yet concerning the level of complexity of the model and comparing it to the average time that a company has to wait for the prototype (that have been outsourced and e.g. injection molded in another place which lasts weeks or months), the difference is significant. The finished 3D prints, precisely 46 of them were then screwed together (the mask) and glued (the stand), so the whole model was ready to insert the LED lights that were soldered to the cables that connected them to the power supply. The designer decided not to do any post-processing, as the surface was smooth enough and any finishing techniques weren’t necessary. The main material used to 3D print the mask was Z-HIPS, mostly because of its durability, resistance and the fact that it is dedicated to create large functional models. The additional property of this material is that it provides mat finish, which compared to the Red Z-ULTRAT makes a nice contrast. 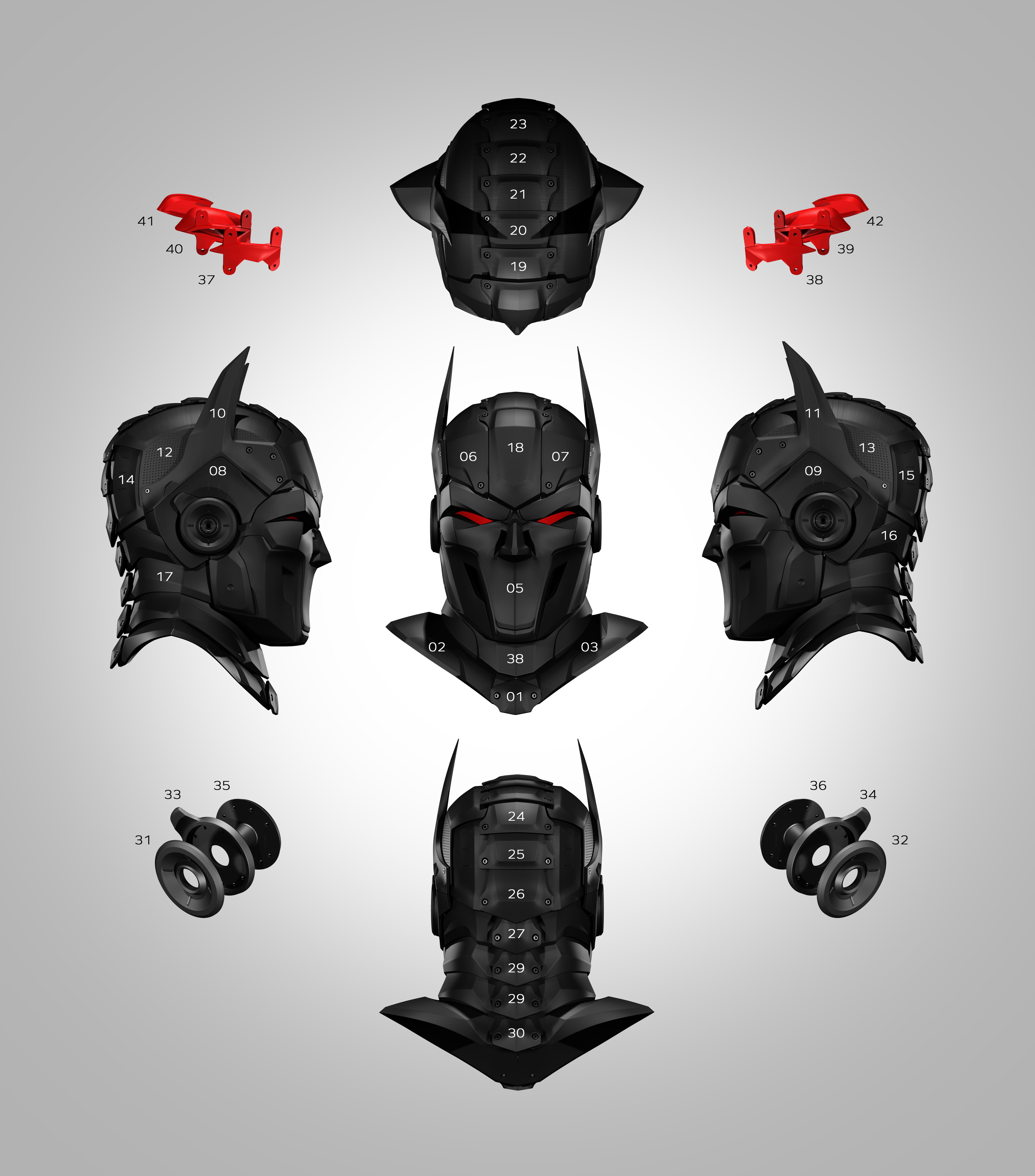 As the model presented here is static and is used for the purpose of exposition, the designer decided to 3D print a useful stand that consisted of four parts and helped to attach the model to the surface and keep it in vertical position. 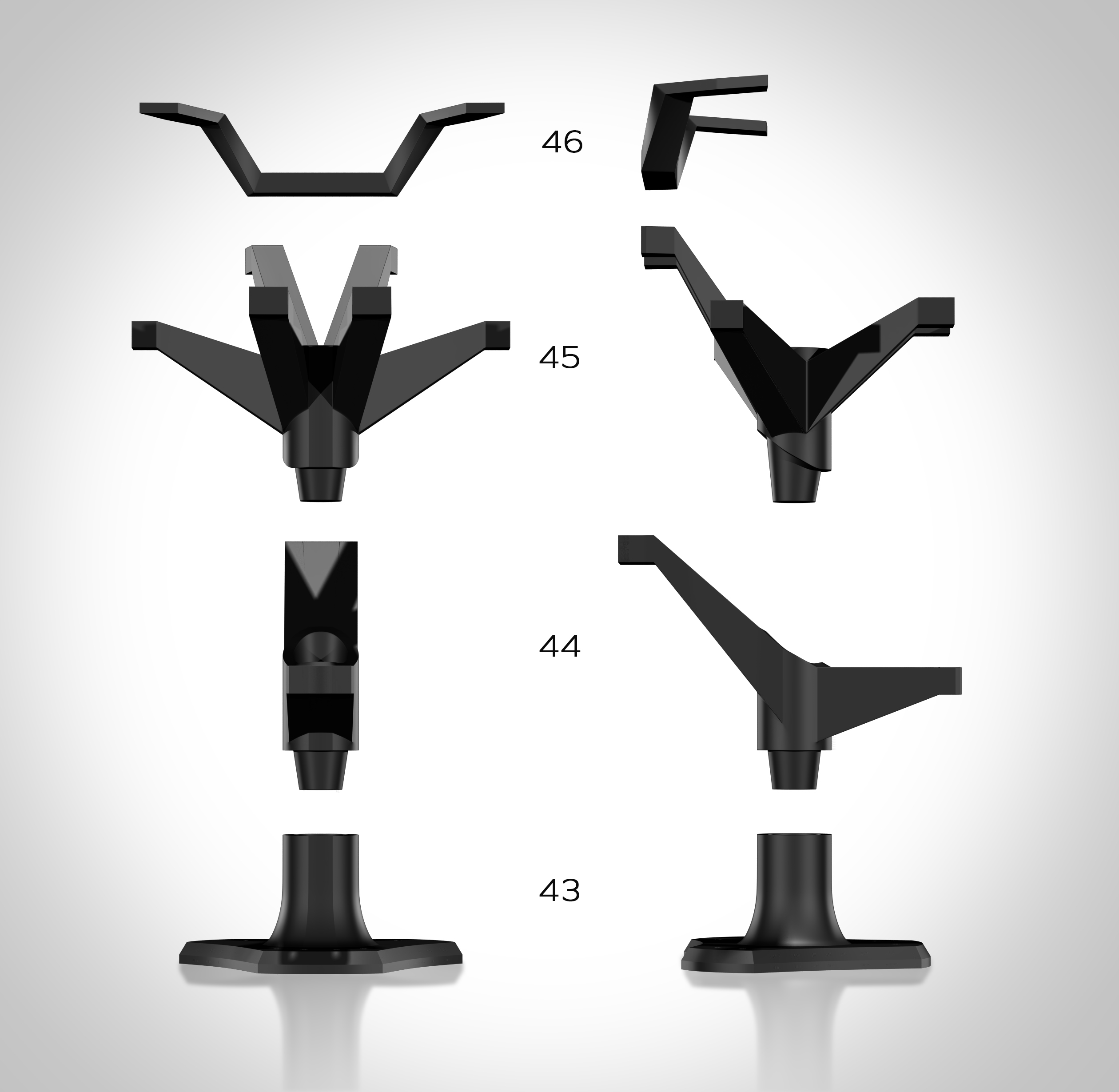 As a contributor to the utility of the 3D printing technology, we wanted to show you that Zortrax 3D printers may be well incorporated in the industry focused on entertainment or for the purpose of the individual users, e.g. like those involved in cosplay. The article makes visible that the representatives ofthese two realms can, with the help of the additive manufacturing technology, enter the new stages of development and gain access to new possibilities. Another great advantage stressed in this text is the role of a 3D printer that brings pure joy to the passionate users and hobbyists and at the same way helps them become more competent in their area of interest.