It’s no doubt that 3D printing is a great business tool, but apart from streamlining your company’s performance it can also help improve lives. Not only people’s lives. This time on our blog we want to present you a turtle and his unique story that ended happily thanks to the help of good hearted people and the cutting edge technology. 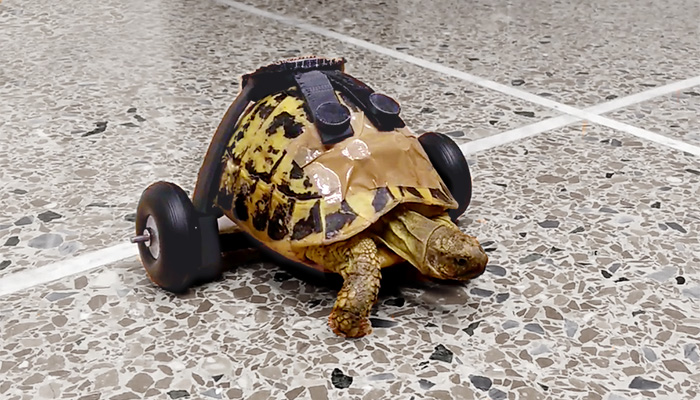 When the whole story began and Uga, the turtle was taken to the veterinary clinic the situation wasn’t really promising. The animal was found with his two back legs badly injured, probably because of the attacks of rats. As the clinic personnel did their best and after a long laser therapy and use of healing bandages, one leg was finally cured, the condition of the other one hasn’t improved. It was in fact in such stadium that the doctors had no choice, but to amputate it, as it might have been a danger to the turtle’s life. The side effect of this surgery was that the turtle, lacking the support of the back leg, was unable to walk and find food himself. He simply wasn’t able to live in his natural environment and survive without people’s help. 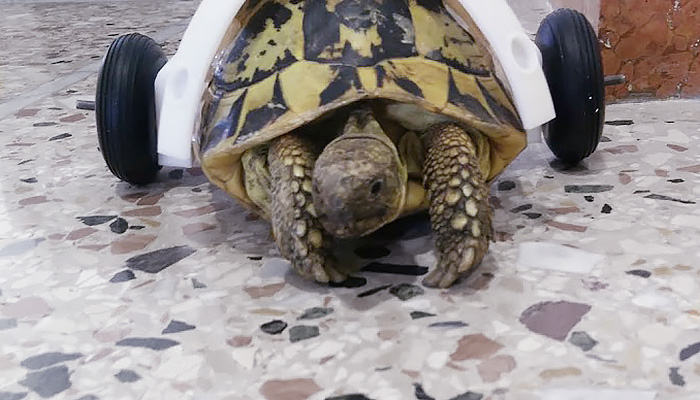 Hopefully the turtle was under the care of Nicola Di Girolamo, known to the bigger audience as dr Furetto, who didn’t want to give up on the animal so fast. The vet knew that the only thing that will allow the turtle to walk on his own again would be a special prosthesis. As he was aware of the fact that creating such prosthesis is above his reach and the prices can be hilarious, he decided to look for the help in the Internet. After entering lots of web pages he came across Orange Pixels/Roma Stampa 3D, a 3D printing hub owned by Massimo Mostosi and wrote to him. Having read the message once left on Facebook, Mostosi loved the idea of collaboration aimed at helping the turtle. Together with the artist and designer Diana Branca they started to think about the design of the prosthesis and the way that Zortrax M200 3D printer could help them obtain the final object fast and cost-efficiently.

Excited about the fact that they can use the 3D printing technology to meet the specific needs and improve everyday life conditions of the turtle, they arranged the meeting to take measure of the animal and prepare a fully customized model. Based on the suggestions of dr Furetto, that the optimal prosthesis should be functional but also easy to remove, after a heavy brainstorming they decided to use a construction on wheels made of Z-ULTRAT and mounted on magnets. But first they had to measure he turtle’s shell as accurately and precisely as possible. To make a close reference Diana first made a mold cast of the shell by covering it with a thick layer of vaseline and then applying gypsum. She also used a 3D scanner to get an exact digital image on the computer.

Having the exact representation of the shell in a digital form, the preparation of a suitable prosthesis could begin. This particular stage was in fact essential for producing the prosthesis, as each individual has different dimensions, so designing an apparatus that will be used by the animal every day must be a well-though process. The first prototype was made on Zortrax M200 3D printer from white Z-ULTRAT and was mounted to the turtle’s shell by tape. After testing it appeared that it isn’t suitable enough, and it took about four more tweaks to come up with the perfect shape. It wasn’t in fact a problem for Mostosi and Branca as with Zortrax device they could redesign the digital models and 3D print new prototypes for testing within a couple of hours. The final version was made of black Z-ULTRAT and to make it easy to handle and disassembly, two neodymium magnets were used.

Finally Uga could make his first steps after the surgery, having the prosthesis mounted on his shell. It was a really exciting moment giving a lot of hope that in the future similar help may be provided to other animals that suffer from disability. The medicine is in fact a vast field where lots of innovations can be implemented to improve the living conditions of patients. Another vital thing to add is also the speed of proving particular solutions, as in some cases it gets really crucial. Undoubtedly, there is a room for improvement that can be obtained by the 3D printing technology and reliable devices as Zortrax 3D printers. Many can take advantage of their unique capacities of being fast, cost-effective and really accurate when it comes to filling the specific needs of individuals, doesn’t matter if they are humans or small creatures like Uga. 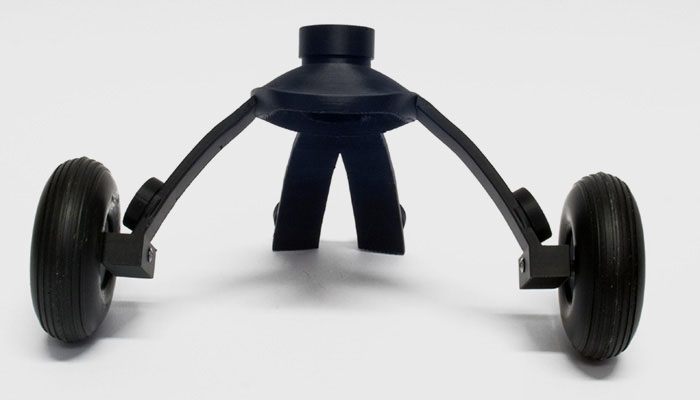