Today we would like to present you something completely different. Let’s focus on craft of a young artist who has chosen the 3D printing as a means of expressing his visions. Therefore, we invite you to descend to the deepest pits of human imagination, where dream collides with unspoken terror. Ladies and gentlemen, meet Nikita Lebedev.

Sculptor with a Wicked Twist

His constant drive for improvement is fuelled by the passion for designing creatures and characters. Some of them are lifelike, but most are truly otherworldly nightmares. As he confirms himself, he sculpts, draws and paints them on daily basis. Busy guy, but a thirst of knowledge cannot be quenched, so he seeks motivation and wisdom everywhere it is possible. Therefore, his recipe for success is to constantly improve one’s skills through every day practice. Asked about his greatest inspirations, he enlists masters of character design: Simon Lee, Scott Eaton, Jordu Schell and Shiflett Brothers. Twisted, corrupted creations are also influenced by the darkest fantasy, sci-fi and horror stories. Without further ado, let’s get into the Nikita’s workshop.

From Fantasy to a Real Horror Show

Artist’s approach to design could be described as eclectic. It’s entirely up to his whim, if he decides to start with a clay model, sketch on a paper or to design it digitally right away. Still he prefers to use a combination of those three methods, as each of them presents opportunity to bring something new to the project. He laughs, that given the same task, but using different approaches, he would end up delivering three different concepts. 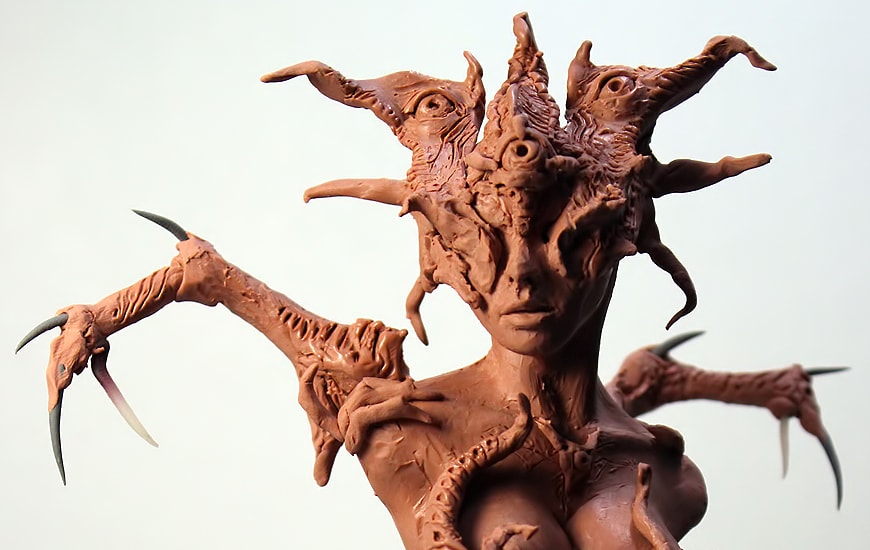 Clay version of the Corrupted Watcher

In most of the cases, he would move back and forth with clay and paper as long as he finds a desired form for his idea. Then it would be tested again in ZBrush software. He prefers to use 3D printing in the later stage of the creature or character development process though. The most challenging part is preparing a model for the 3D print, as a lot depends on how he positions the print on the bed, from quality of the print to amount of clean-up. 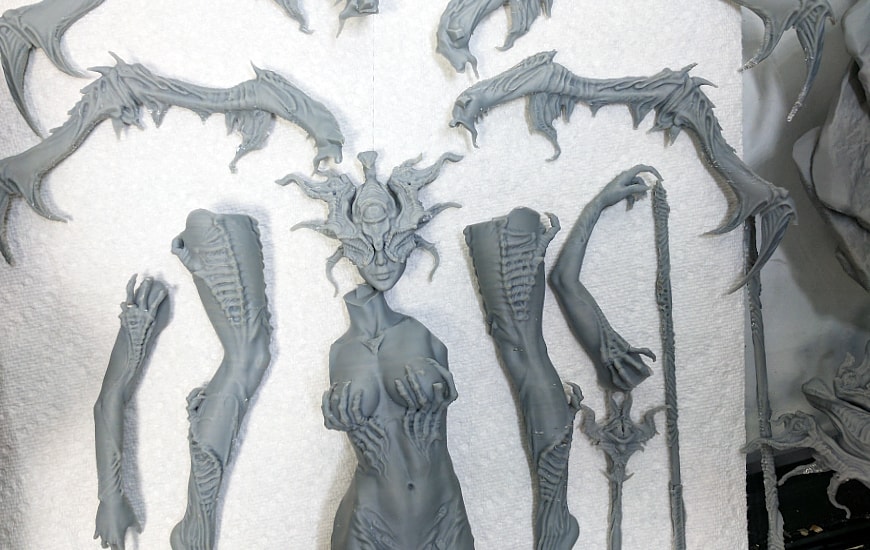 3D printed parts of the Corrupted Watcher by Nikita Lebedev

After the completion of a print comes post-processing, which Nikita divides it into three separate stages. First comes the assembly of printed pieces. Seams between the parts are fixed with epoxy or alternatively with mixture of superglue and baking soda. With the curing done, he would then move to cutting off any overflowed adhesive material.

Then, assembled sculpture needs to be smoothened with acetone. In places where the layers are more visible, he brushes against their direction a couple times. Still it is crucial not to be overzealous with the acetone, as it might melt down details and design elements of the print. It’s probably easiest and quickest post-processing option available, although some of you might consider it brutal and risky for such detailed design. So, if he is afraid of losing smaller features during acetone treatment, he will always enlarge them a little bit in modelling software to achieve perfect result later. Nevertheless, it does the trick flawlessly. If needed, Nikita would also enhance sculpture with micro details. Spikes for the Alien Spitter are made of Sculpey and saliva is resin. 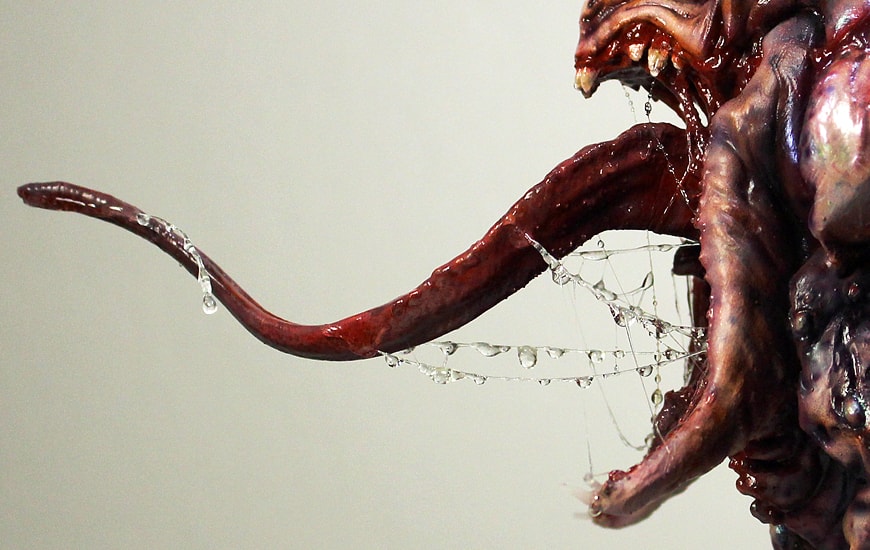 Fine details were created with resin

The last step is priming. Its objective is to eliminate any remaining layering and visible seams joints. Nikita prefers to use white or grey coloured Vallejo primer. To ensure the even coating, he advises to use an airbrush, as primer tends to solidify quickly. Problem areas might need a second layer or sweeping over them with a paint brush dipped in primer. All that’s left to do, is to paint a sculpture. Easier said than done.

Thus, we would like to proudly present latest sculpture of Nikita Lebedev. Behold the Corrupted Watcher, a manifestation of irresistible beauty and primordial fear combined. Noteworthy, this 48-centimetre piece of art was finished single-handedly in less than two weeks. Final painting itself took a whole week of work. It was 3D printed entirely on Zortrax M200 using Cool Grey Z-ABS material. Take a while to admire her stunning details, but take heed – abyss might stare back at you.

Head of the Corrupted Watcher 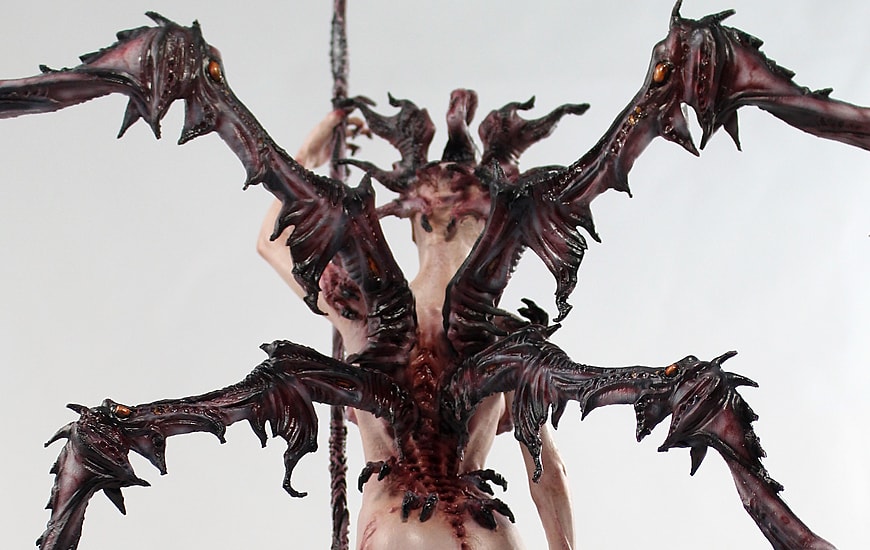 Back view of the 3D printed statue

Working previously with clay and on the computer screen, Nikita realized how much further he could push his sculptures giving 3D printing a try. Achieving such depth of detail and complexity would be impossible with ordinary approach though. Nikita understood it perfectly, so while browsing for an appropriate 3D printer, he didn’t cut any corners. After thorough research, there was only one competitor left on a field – Zortrax M200. Proven by his works, our printers are winning when it comes to the precision of the print and the least amount of required clean-up. What’s more, Z-ABS and Z-ULTRAT are materials of his choice for presented sculptures. He values them because of their excellent properties and smoothness of post-processing. Nikita’s phenomenal craft combined with excellence offered by Zortrax products will go a long way. Even though the prints you are about to see were his first 3D printing experience, Alien Spitter and Cyborg bust got successfully printed right away with all the small details preserved. 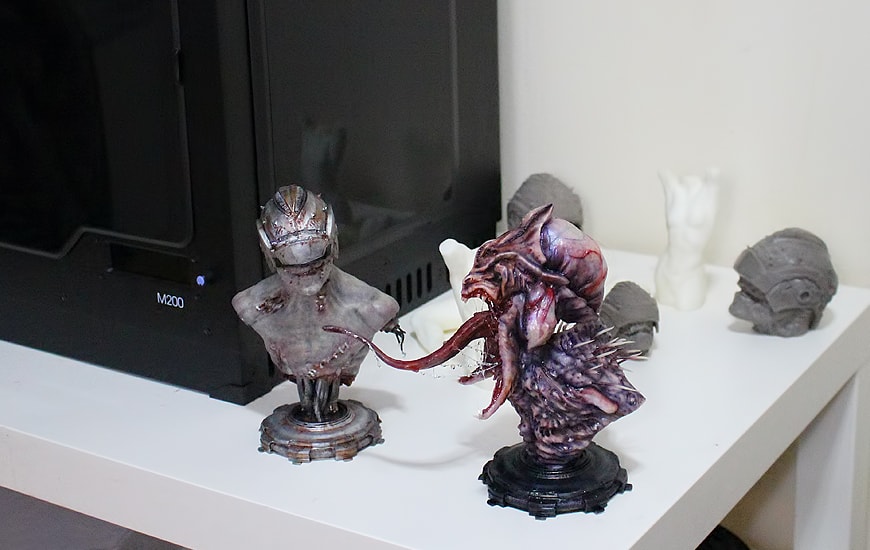 What he values the most about working with Zortrax M200, is simplicity of the printing process and ease of maintenance. Although he didn’t have any experience with 3D printing before, he had no problem with entering the community. Furthermore, quality of the prints done with Zortrax device is unmatched amongst FFF printers. It would be impossible to get more value for same amount of money spent. Artist looks further and asks himself, what would happen, if he got his hands on Zortrax M300. Multidimensional invasion, perhaps. 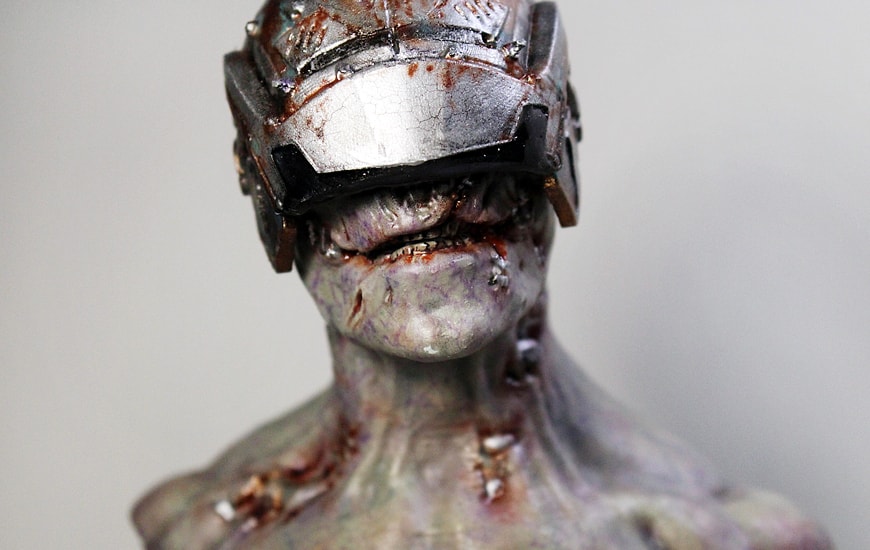 Employed as a senior creature and character artist at Mr. X, Nikita is currently working on upcoming Guillermo Del Toro’s movie. His latest works include also designs for Resident Evil: The Final Chapter and for the Vikings series. Work of creature and character designer consist mainly of imaging and presentation of ideas. Painting or a drawing shows only a flattened image, so Nikita looked practically at his past time hobby. He would like to incorporate 3D printing into professional designing process. It would be beneficial to his clients, as well as to himself, because there’s nothing compared to the tangible object, something you can touch, rotate freely in your hand and interact with. Luckily, freedom and simplicity of creation offered by rapid prototyping is unparalleled by any other medium.
We are looking forward to seeing more, no matter how horrific they might be, products of his imagination!