3D printers won’t make microchips for you, but it will let you create many other elements needed for electronic products. Leading technology companies are already using 3D printers, mainly for prototyping, but it’s not the only possible application of 3D printing in the electronics industry.

3D printing is a technology which can be used by the giants and by the little ones. The low cost of a single 3D printer make it possible even for a newborn start-up to buy one. On the other hand, the leading companies in the field use 3D printers on a mass scale. In every case, they make work easier. For small companies, they accelerate decisions and make it possible to conduct prototyping rapidly with the company’s own resources. In large corporations, they bring significant savings.

Printing Spares for the Production Line

The best example is Bosch and their use of Zortrax M200 3D printers. Bosch doesn’t use them for prototyping. The branch in Mondeville, France uses 3D printers to manufacture spare parts for machines and equipment used on the production line. 3D printed parts are cheaper than original elements and available in a few hours. This allows for continuous production, without being forced to wait until spare parts are delivered. Storing all the possible spare parts in advance is also not financially sound. The factory manager, Frédéric Boumaza, stated that thanks to the Zortrax M200 3D printers the company had already saved 80 thousand euros and a lot of time. Creating tools and spares is one of the most interesting applications of 3D printing.

When you consider 3D printing in the electronics industry, you can’t skip the subject of prototyping. 3D printing makes it possible to quickly create the prototype of a casing or other elements needed for the test device to work. The technology is relatively cheap, available and fast. You can quickly modify projects. Zortrax 3D printers were used to create the prototype casings of the Sherlybox, a device that was part of a private cloud service for business. 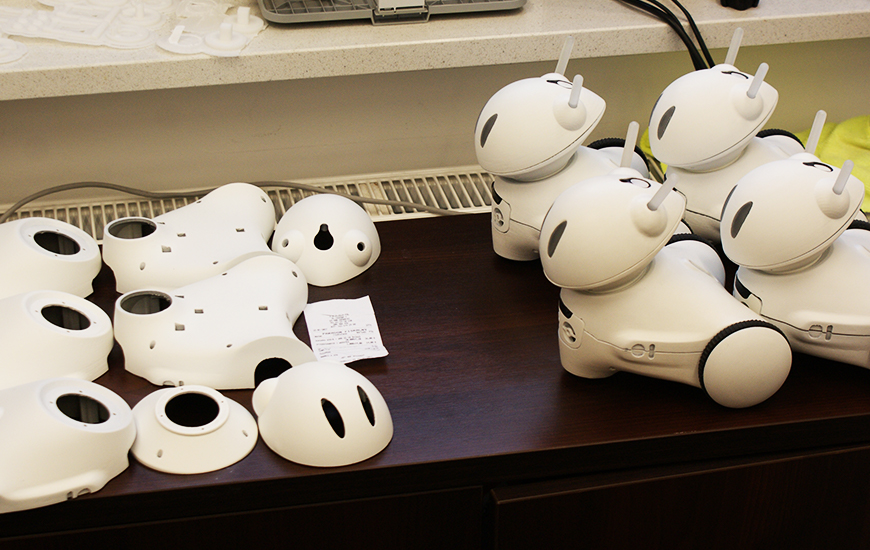 Elements of a Polished Product

Sometimes the 3D printer is enough for small or medium volume production. The Zortrax M200 3D printer is the perfect example. It comes with a holder for the material which was printed with the use of an exactly identical 3D printer. In some cases, such a decision is financially sound. When you release the first, small series of your devices you can print their casings in a 3D printer. The same goes for other components. 3D printing is perfect for applications sych creating components for robotic arms and other complex devices. 3D printing can lower costs and allows for quick modifications to the project. Moreover, materials such as Z-ABS for the Zortrax M200 3D printer are available in eleven different colors. This will let you put your product into a very attractive body.

Rapid prototyping, quick modifying of the projects as well as functional testing are some of the main advantages of using 3D printing in the electronics industry in the stage of creating a project. The technology can also be used during production to print finalized parts or tools and spares necessary for production. 3D printing accelerates the design phase and significantly reduces costs. You have to remember that it can have practical applications both in small companies and in huge corporations.