NASA wants to launch the Asteroid Redirect Mission (ARM) in the early 2020s. There are two variants of the ARM currently under development. The first is entirely robotic. The second, known as the Asteroid Redirect Crewed Mission (ARCM), involves sending astronauts onboard an Orion spacecraft to explore a small asteroid redirected into a stable orbit around the Moon and get the collected samples back to Earth. Engineers at NASA’s Johnson Space Center in Houston are working on the right set of tools for astronauts to complete such missions. First functional prototypes of the Geology Sampling System for Small Bodies have been 3D printed with Z-ULTRAT on the Zortrax M200.

The idea of “asteroid retrieval to Earth” was first mentioned in July 1980 when Robert Forsch, the then NASA Administrator, testified to Congress that it was infeasible at the time. In 2012, Keck Institute for Space Studies revisited the project and did a feasibility study concluding the mission finally became doable. NASA’s Glenn Research Center then estimated it would cost around $2.6 billion which also seemed reasonable given the task at hand. Having the asteroid orbiting the Moon, the only remaining question was what to do with it. That’s where the idea of sending astronauts to explore it came from.

The team designing tools for the ARCM claims human exploration of small bodies is inevitable for a number of reasons. First of all, such missions are of great scientific value. Means of analyzing samples onboard an automated spacecraft are quite limited, so is the machines’ ability to identify interesting samples to collect. Besides asteroids, the space exploration community has considered human missions to Ceres, the largest object in the asteroid belt, and Phobos, a very small moon orbiting  Mars. Second, asteroids are considered as a potential source of raw materials like gold, cobalt, iron, manganese, and many more.

The idea of asteroid mining is in the early stages of development and there are some questioning its feasibility given the technology we have at hand. Still, asteroids’ microgravity environment poses the same set of challenges to astronauts, no matter if they are there for scientific or commercial purposes. Gravity on Earth, Mars, and even the Moon allows for similar geology sampling tools and techniques. But none of those will work on an asteroid. 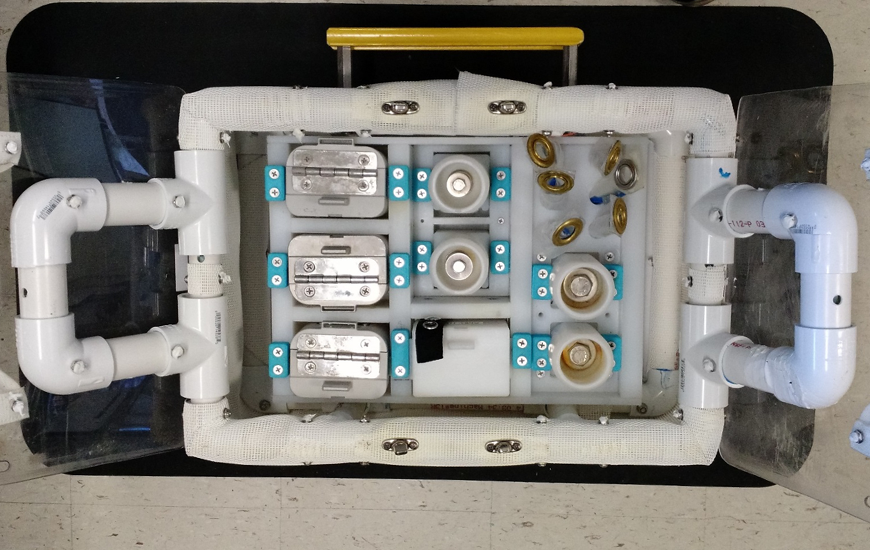 Tools designed for astronauts exploring small bodies need to operate in very specific set of conditions. First of all, there is no ground retraction force. Then, one misstep can cause debris clouds to float around and damage the nearby equipment. Next there is a challenge of body positioning and anchoring. Footage from the Moon landing made during Apollo program shows astronauts making awkward leaps on the surface. Each time though, they were falling back to ground like they would on Earth, only slower. Doing the same thing on an asteroid would simply send them into space with no way to get back to their spaceship. Thus, every little mistake like that can turn into a life-threatening situation. Hence, NASA’s JSC engineers needed an asteroid centric tool suite. To design it, they had to first consider the scientific goals of the ARCM.

To begin with, scientists wanted to have a video footage from astronauts working on the asteroid. So, there was a need for hand-held, high-resolution cameras and supporting analytical instruments. They also pointed out contamination control was very important—there is no point in analyzing samples if they contain chemical compounds astronauts brought with them from Earth. Having all that covered, the science team went on to recommend collection of at least 1000 g of material from two sites, at least one 5 cm diameter core sample of regolith from each of two sites, and preservation of volatiles. Engineers had to design tools for astronauts to accomplish all of those tasks. 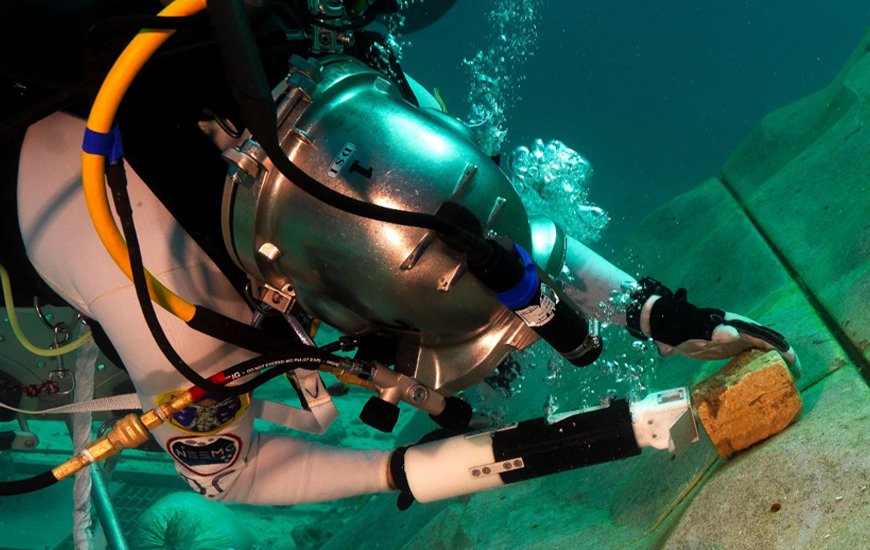 Collecting samples with a functional prototype of the Chip Sampler during the NEEMO mission. Credits: NASA/JSC.

First, engineers identified five different categories of samples to collect. Float samples were rocks loosely attached to the surface that could be picked up with simple grabbing action. Chip samples were small pieces forcibly removed from a parent body. Regolith samples were a loose conglomerate of fine particulate, dust covering the surface, that could be retrieved with a scooping action. Surface samples were the fine, top layer of the surface up to 1 mm deep. And finally, core samples were cylindrical, hollow masses retrieved from the asteroid’s interior by drilling. Having that done, the team completed a list of specific tools to deal with each category.

First they tackled a float sampler. It quickly became apparent that grabbing rocks laying  on the asteroid by hand was too risky. The spacesuit materials could easily contaminate collected samples, moreover there was a significant possibility of glove puncture. So the engineers came up with a clamshell design which worked well in containing floating rocks and prevented samples from contamination once they were trapped in the closed clamshell. The same tool proved effective also in collecting dust covering the surface.

3D printing of an end-effector for the NASA’s Geology Sampling System on the Zortrax M200 at NASA Johnson Space Center. Credits: NASA/JSC.

To tackle collecting uncontaminated dust covering the asteroid surface, NASA’s JSC team started with a tool astronauts took to the Moon known as The Contact Soil Sampler. A sample pad attached to a handle would lightly touch the ground and retract to a small container. Feedback from crews performing real-world test with 3D printed prototypes of such tools made it clear the mechanism for opening and closing the container had to be redesigned. Specifically, in the original Contact Soil Sampler, an astronaut closed and opened the container’s doors manually which posed a risk of contamination. Hence, the engineers made a prototype with a container operated by lever attached to the handle.

Collecting chip samples proved to be even more challenging. On Earth, geologists use a chisel and a hammer. Pieces of rock fall to the ground for easy pick up. But on the asteroid they would float around posing a threat to astronauts working nearby. So, the engineers designed and 3D printed a hand-held tool with a removable end-effector containing a chisel, two windows and a sliding door.

Finally, the team designed a drill for collecting core samples. The device was to be deployed on the end of the stabilization broom attached to anchored spacecraft. Samples were then to be automatically transported to the ship.

In each case the engineers had to think about how the collected samples were to be stored. It was by no means simple. Astronauts on the Moon could simply put their samples in bags. Gravity was sufficient to support it. But on the asteroid, transferring something from a tool’s container to a bag would be impossible. So the team went for an architecture where sample storage was integrated into the collection tool.

Attaching a driver to an end-effector during tests of the NASA’s Geology Sampling System on the NEEMO mission. Credits: NASA/JSC.

The Geology Sampling System for Small Bodies at the current state of development is the size of a briefcase. To save space and weight, there are two drivers, one manual and one powered, working with interchangeable end-effectors for retrieving different kinds of samples. An astronauts on the mission simply opens up the briefcase, attaches an appropriate end-effector to the driver, performs the sample collection and puts the end-effector back into the suitcase. From this point on, the end-effector works as a sample container. Obviously then, all end-effectors can be used only once.

The system is designed to restrain each end-effector using two opposed ball plungers. The plungers provide adequate restraint during translation activities, and still allow for easy removal once a driver has been attached. This design minimizes the potential for cross contamination, however it significantly impacts the mass and volume of the sample collection suite.

A functional 3D printed prototype has already been tested on the NEEMO analog mission, in the depths of the Atlantic Ocean. At one point during the tests, one of the end-effectors broke down. NASA’s JSC engineers 3D printed a replacement and got it delivered to the testing site within 24h—something that would have been impossible without having reliable 3D printers in-house.

The current version of the system is still a work in progress. Lots of tests and 3D printed prototypes lays ahead before it gets fully operational. However, since ideas about missions to asteroids constantly evolve, there is no one particular toolkit design the engineers can lock on. Zortrax Ecosystem helps them adjust their prototypes rapidly whenever mission requirements change. They claim, they can easily change the size of the briefcase to hold different quantities of each end-effectors, depending on a given mission.