Toyota manufacturing plants in Poland specialize in assembling hybrid and conventional drives that end up in cars shipped all across Europe. Polish factories employ over three thousand people and have significant production output. Here’s how Zortrax 3D printers are used to optimized costs and cut lead times at one of the largest automotive factories in Europe.

What Zortrax 3D Printers Do at Toyota

“Let’s start with what is the main task we are responsible for here in Poland. Toyota is a huge, global manufacturer and we operate as a part of a larger production system with various, specialized plants located all across the world. Our job is assembling engines for Toyota cars”, says Łukasz Kondek, a 3D printing engineer working at the Toyota factory. Those engines are made out of parts delivered from other Toyota plants located all across Europe. 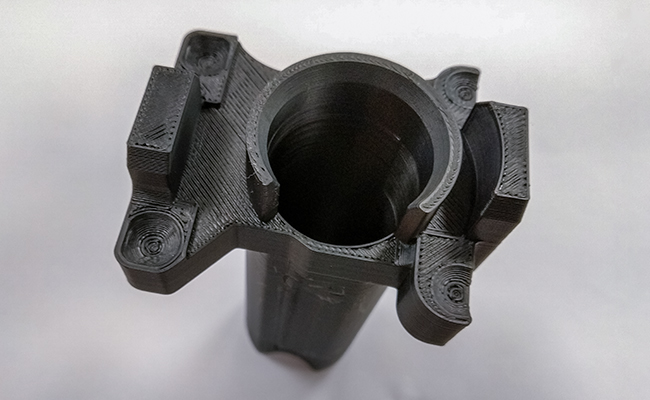 A valve lever cover 3D printed at Toyota factory on the Zortrax M300 Plus 3D printer.

“This manufacturing profile translates directly into what we use the 3D printers for. The vast majority of the models we print are various jigs and fixtures”, says Kondek who then goes on to explain how jigs are categorized at his facility. There are:

“Of course, not everything can be 3D printed and we often use various manufacturing technologies to make a single jig or tool. For example, there are parts which have bodies 3D printed on Zortrax machines, but the points of contact with metal surfaces are made in a traditional way out of materials particularly resistant to wearing. This way we can keep the speed and cost-efficiency of 3D printing in automotive and achieve superior durability.”, says Kondek. Below are three chosen examples of jigs and tools 3D printed at Toyota manufacturing plant.

When the engine is transported from one assembly station to the other, engine valve levers need to be kept in one position. So, Toyota engineers use custom-designed covers to keep those levers steady. Moreover, the entire set, when installed, prevents the engine from falling off the platform on which it is transported. Upon arrival to the right assembly station, the covers are removed. 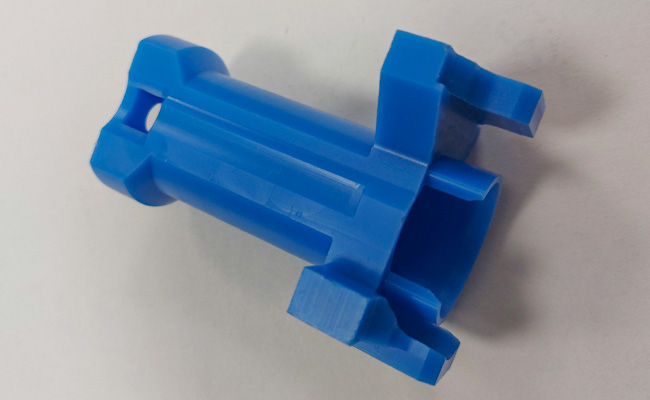 “This is a great example of what 3D printing in automotive is capable of.”, says Kondek. According to him, his team quickly iterated through 12 different designs of those covers to optimize them for both strength and weight. During just one shift, Kondek could go through three different geometry changes and 3D print two consecutive versions of this jig on the Zortrax M300 Plus 3D printer.

Another category of jigs made on a Zortrax M300 Plus, a 3D printer for automotive, currently in use at Toyota factory, is positioning jigs. “There are various jigs of this kind we use at the assembly line to confirm that the parts are assembled correctly.”, says Kondek. 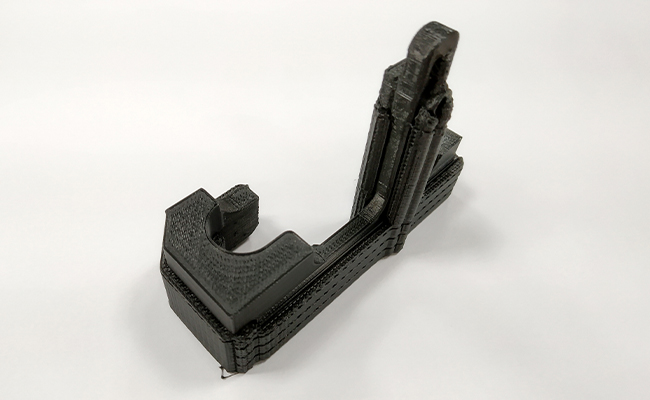 Positioning jig manufactured at Toyota factory on a Zortrax M300 Plus – a 3D printer for automotive.

The key advantage of using 3D printed positioning jigs is their surprisingly long lifespan and an option to incorporate other manufacturing technologies in the design. In the CAD project shown below, grey components were made out of metal, while yellow pins were supposed to be CNC’ed out of nylon. The body of the part, colored red, is 3D printed.

“The interesting thing about this particular jig is that it has been delivered to teams working on the assembly line as a prototype test parts interned to undergo further adjustments”, says Kondek. According to him at this stage of the prototyping process the tolerances have been slightly off and the jig lacked proper sliding bearings. Despite that, it had been used for half a year, every day, before it broke.

CAD design of a positioning jig to be 3D printed at Toyota factory on Zortrax M300 Plus 3D printer. Fully assembled jig have contact points made out of nylon (marked on the design with yellow).

“And when it’s got broken, we could use the same Zortrax M300 Plus 3D printer to make another one in just 7 hours. Making replacements at this pace would have been impossible without 3D printers for automotive onboard”, says Kondek.

The engine block cover is a jig that shows more advanced workflows where a target tool is larger than an available workspace in a 3D printer and where separate 3D printers are used for prototyping and fabrication of the final component.

Part of the engine cover 3D printed at Toyota factory before taking it off a Zortrax M300 Plus 3D printer’s build platform.

“The purpose of this jig is sealing the technological cavities in the engine block during assembly processes. It prevents tools, screws, and other objects from falling into these cavities which is absolutely critical for the operation of the final engine.”, says Kondek. 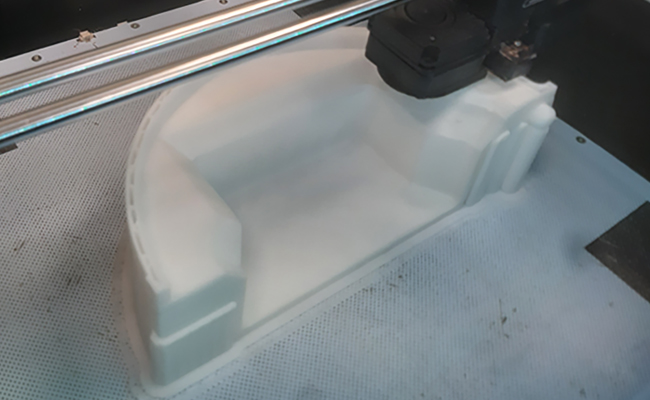 Engine cover is too large to 3D print in one piece even on a fairly large M300 Plus 3D printer. That’s why Toyota makes it in multiple parts that are assembled once the printing is done.

Finally, the end-use component has been 3D printed on an industrial machine with a high-performance material that could not be supported on the M300 Plus due to its open architecture. “We need larger 3D printers in automotive for such applications, for example Zortrax Endureal, with a closed architecture ensuring stable temperature in the printing chamber to avoid warping and shrinkage which can severely affect large prints.”, says Kondek.

“We have been using 3D printers for years now. They were already here when I came to work at Toyota four years ago.”, says Kondek. According to him, jigs that are 3D printed in automotive industry today used to be made by a separate tooling division equipped with CNC machines and other subtractive manufacturing tools. Fabrication of more demanding designs were simply outsourced to external subcontractors. 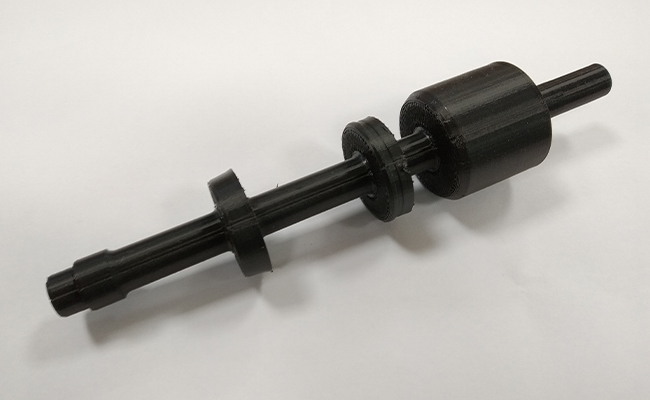 A part of a jig for applying grease on automotive parts made by Toyota on Zortrax M300 Plus 3D printer.

“Obviously, using such tools severely limited what we could do design-wise. Every time we thought about a new jig, we had to think twice about whether it could be fabricated or not. 3D printing in automotive sector solve this problem.”, explains Kondek. He adds that currently over 95 % of the 3D printed jigs made at Toyota factory are manufactured in the LPD technology. The rest is 3D printed in other 3D printing technologies.

So far, according to Kondek, the investment in 3D printing equipment fully paid for itself within one year. “3D printing in automotive is not as much about speed of fabrication, as this is not the fastest technology out there. But it certainly is the most agile. We don’t need to stock on spare parts as they can be 3D printed on demand. We can optimize designs however we want, because 3D printers in automotive can fabricate almost all possible geometries. Finally, we can start printing right away. We don’t need to wait till a tooling division, or an external subcontractor, has available resources to work on our assignments. Our lead times dropped from week to days and in some cases hours.”, says Kondek.

The M300 Plus 3D printer currently used by Toyota provides basic 3D printing capability for manufacturing applications. Combined with other Zortrax 3D printing solutions however, it can work as a basic building block in more advanced additive manufacturing systems. Here’s a couple of viable examples. 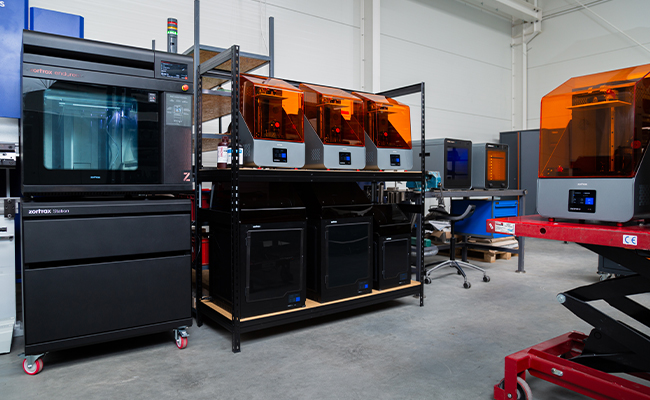 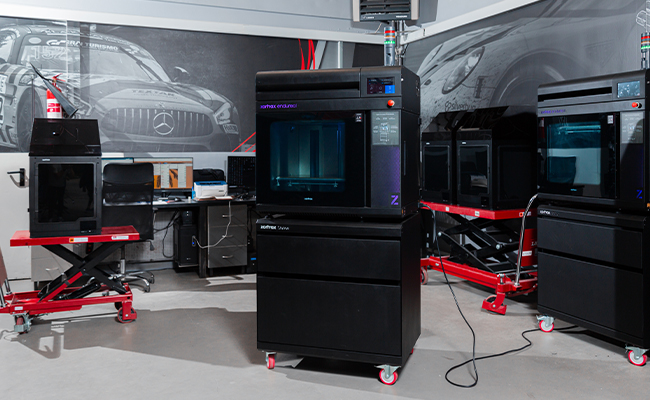 Adding Zortrax Apoller smart vapor smoothing device to the factory’s 3D printing workshop makes it possible to consistently smooth large quantities of 3D printed jigs. Vapors smoothing with MEK or acetone vapors certainly makes the 3D printed models prettier but it also makes them less permeable. They simply become water-proof. This severely limited permeability is crucial in making jigs designed to be filled with oils or other greases. The Apoller has been designed for large throughput and in one smoothing session lasting roughly 3 hours it can smooth multiple different jigs. It is also ATEX certified and can be safely implemented on a factory floor.

Standard polymer filaments like ABS may sometimes prove too weak for parts intended to work under heavy loads, withstand significant wear and tear or endure very high temperatures. This problem can be solved with the Zortrax Endureal, an industrial 3D printer for automotive, which is designed to work with high performance polymers like Z-PEEK or VICTREX AM™ 200 which retain their properties in temperatures exceeding 300 degrees Celsius reach tensile strength values north of 90 MPa. 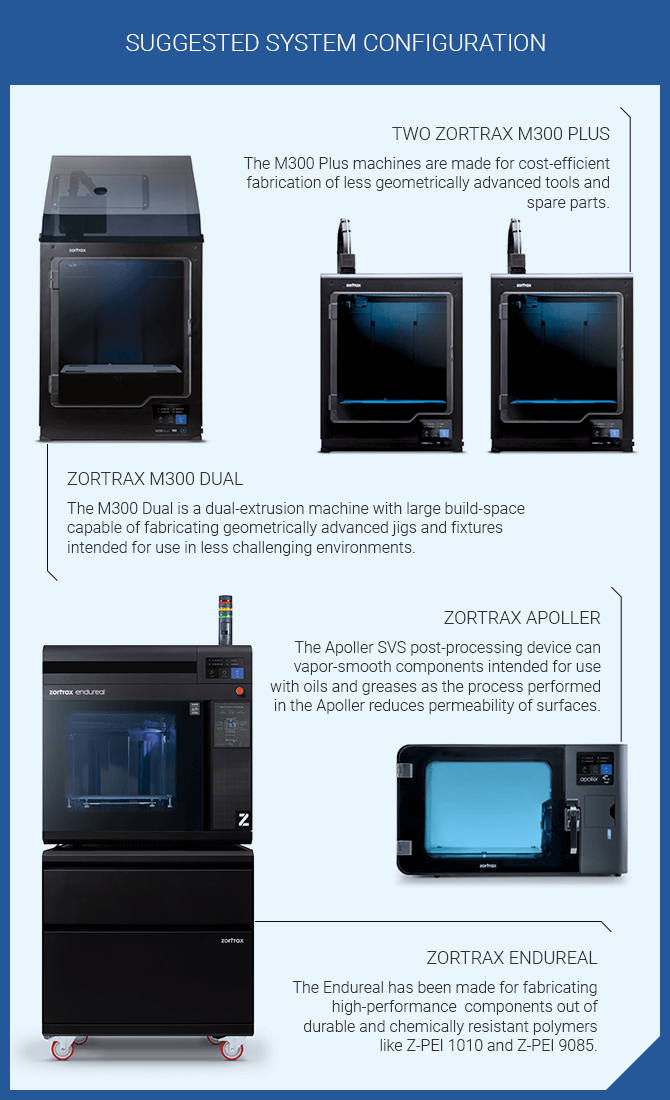 Finally, when the projects’s thermal and mechanical requirements go way beyond of what’s possible even with strongest polymers on Earth, the Endureal can do one more thing. It can make parts out of steel. Specifically, the Endureal works with BASF Ultrafuse® 316L and BASF Ultrafuse® 17-4 PH metal powder filaments which after a two-stage post-processing developed by BASF Forward AM and performed by Elnik Systems GmbH become fully functional 316L stainless or 17-4 precipitation hardened steel. These materials are available in Zortrax Full Metal Package 316L and Zortrax Full Metal Package 17-4 PH, kits containing everything necessary to 3D print steel parts on the Endureal 3D printer. 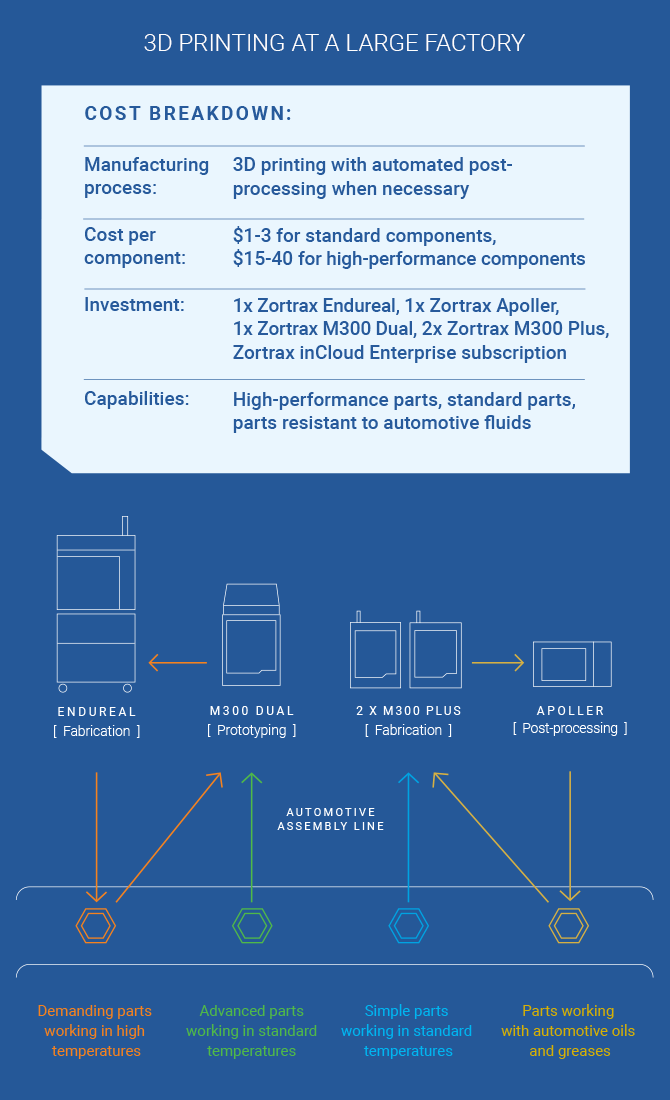 Feel free to get in touch with our Sales Team  on sales@zortrax.com. They will be glad to recommend the right 3D printing system for your business.