One of the best French biathletes could train despite a wrist injury due to customized equipment 3D printed on Zortrax M300 Dual 3D printer with BASF Ultrafuse PP GF30 filament.

“In most cases, professional athletes come to us because they need sports equipment that is made and tailored specifically for them to further improve their performance”, says Clement Jacquelin, the CEO and founder of Athletics 3D, a French company using 3D printers to build customized sports gear.

Back in July 2021, however, Athletics 3D had to deal with an entirely different challenge. During the training camp in Norway with the rest of the French national team, one of the world’s best biathletes had an accident on the road to a cycling session. He crashed and injured his left arm he extended to cushion the fall. The diagnosis in a hospital where he was immediately taken looked bleak. His radius and ulna, two bones in the forearm, were fractured.

The bones had to be surgically secured with a metal stabilizer. Recovery period was expected to last at least a couple months which didn’t look good ahead of the Olympics. To make effective training possible despite the injury, Athletics 3D had to modify the biathlete’s rifle. 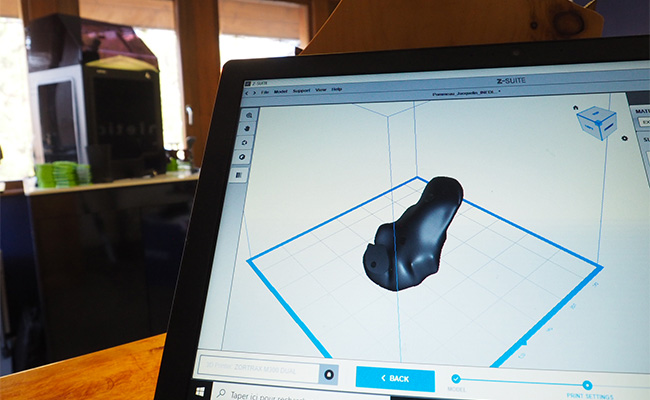 Digital model of a modified hand-stop visualized in Z-SUITE software before the 3D printing process.

“3D printed sports equipment can be customized to accommodate limited movements an athlete has to deal with during the recovery period after an injury. In this case, our client had trouble with forearm supination and his ulnar deviation angle was severely limited”, says Clement Jacquelin.

With such limitations, aiming a standard biathlon rifle in a prone shooting position was impossible. Instead of putting the shooting sessions on hold for the entire recovery period, French team decided to modify the rifle.

How the Rifle was Modified

The goal of the project was to enable the biathlete to shoot with limited ulnar deviation angle. To achieve that, the team at Athletics 3D modified the hand stop, a part where a sling is attached to the bottom of the rifle’s stock.

The design process began with using a Zeiss 3D scanner to make a precise digital model of the original hand stop. Once this was done, the team began to apply changes. 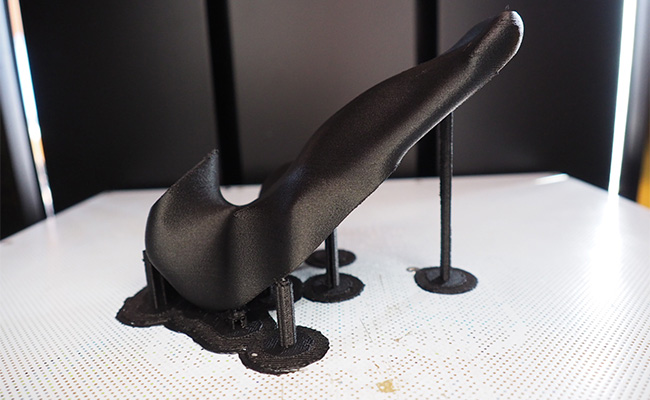 The hand stop 3D printed with BASF Ultrafuse PP GF30 was modified to provide stability while aiming the rifle with a fractured hand. Model just after the 3D printing process in the Zortrax M300 Dual build chamber.

“The first thing we changed was the angle at which the hand stop was held to enable aiming without twisting the wrist. This way we solved the problem of limited ulnar deviation angle. In the second step, we increased the area of contact between the hand stop and the palm to provide more stability in a position our client had not trained for”, explains Clement Jacquelin .

The hand stop 3D printed with BASF Ultrafuse PP GF30 could be held without twisting the wrist.

The results achieved with the redesigned, 3D printed hand stop were impressive, considering the circumstances. The first shooting session after the accident took place in September 2021. The injured biathlete was back to shooting in under two months. Athletics 3D and French team coaches found that shots taken with the new hand stop were even more precise than with the standard one. The metric that went down, however, was shooting rate.

Shooting with the 3D printed hand stop was more accurate, but slower.

According to Clement Jacquelin, there was a lot of thought that went into choosing the right material for the hand stop. Here’s why the company finally settled for the filament made by BASF Forward AM.

“We could not just use popular filaments like standard ABS or PLA. The part had to withstand significant stress, be resistant to impacts and have a great surface quality. This alone limited our options to just a few candidate materials. Finally, what really sealed the deal for BASF Ultrafuse PP GF30 was its thermal stability”, says Clement Jacquelin.

What thermal stability meant in this case, was retaining excellent mechanical performance in a wide range of predominately low temperatures. According to Athletics 3D, biathlon races, depending on the location, are done in temperatures as low as – 25 °C.

“Most polymers do not work well in such low temperatures. Materials like PLA or even ABS tend to become brittle when it’s freezing. That’s why French coaches insisted on choosing the material that could perform in low-temperature conditions. Thanks to BASF Ultrafuse PP GF30 we had no problem with that. The material’s exhibited the same, excellent performance in both freezing cold and relatively mild temperatures just below 0 °C”, claims Clement Jacquelin.

Once the right material was chosen, Athletics 3D pushed the project to their Zortrax M300 Dual 3D printer, which was factory-calibrated to work with BASF PP GF30.

“3D printers often have issues with accurately reproducing irregular, organic shapes. Performance in tasks like that lets you immediately tell the mediocre 3D printers from the really good ones. Ergonomic shapes we use in our sports gear are always challenging and utmost precision is necessary to achieve the desired effect. That’s why we chose the Zortrax M300 Dual”, says Clement Jacquelin.

According to him, there were two main reasons behind going with the Zortrax M300 Dual in this project. 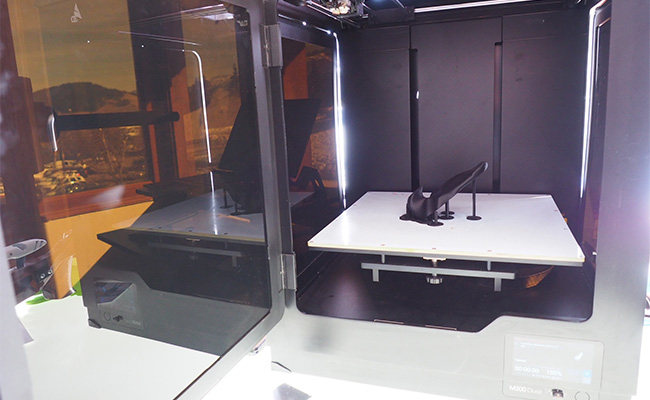 Zortrax M300 Dual working with side covers and HEPA Cover keeps the temperature stable in the build chamber which ensures consistently high quality of prints made with BASF Ultrafuse PP GF30.

Overall, training sessions with the 3D printed hand stop started in September and lasted till the end of December 2021. When a full movement was restored in the athlete’s wrist, the team decided to go back to the standard hand stop.

“The main reason was that the coaches together with our client decided that increased accuracy did not offset the slower shooting rate. However, getting back to shooting and competing in World Cup races was made possible at least two months before it normally would have without our 3D printed hand stop”, says Clement Jacquelin.