The Aquarius habitat is the world’s only operating undersea laboratory located 62 ft underwater, 3.5 miles off Key Largo, Florida. This is the facility where NASA’s recurring NEEMO analog missions take place, turning astronauts into aquanauts for some time. To support NEEMO, a team of engineers at NASA Johnson Space Center in Houston works with Zortrax M200 and M300 3D printers to make end-use parts and fully functional tools, rather than prototypes meant for perfecting designs at first stages of development like they do in the ISS project. Modular Equipment Transport System (METS), a four-wheeled cart for hauling tools on planetary surface missions, was one of the designs where they heavily used Zortrax Ecosystem early on in their work, and then used some of the 3D printed parts in the functional prototype meant for real-world tests performed on June 17-28 2017, during the NEEMO 22.

NEEMO analog missions offer an opportunity to train crew; conduct behavioral, physiological, and psychological experiments; test hardware configurations; test exploration operations; and perform a host of other exploration-related activities. During a NEEMO mission, NASA aquanauts spend up to three weeks living and working in under the surface of the Atlantic Ocean. 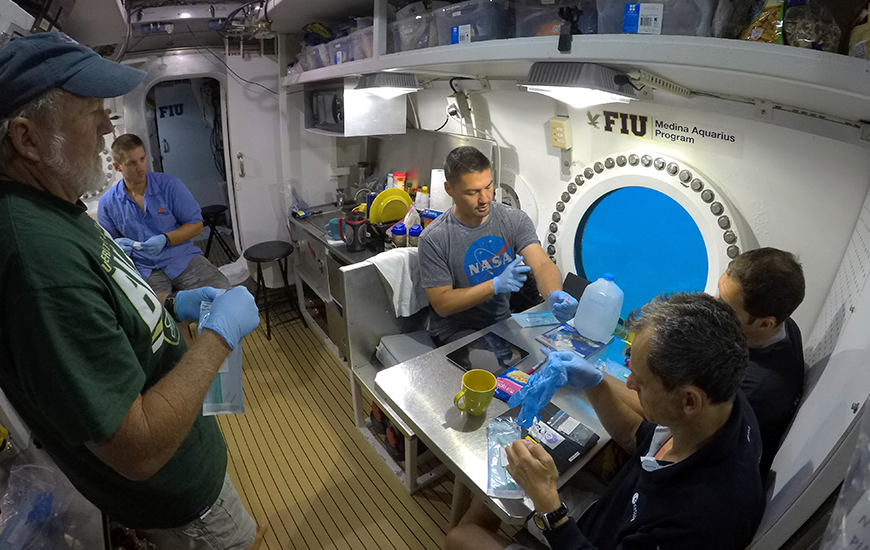 Just like an interplanetary spaceship or a Martian outpost, the Aquarius habitat provides everything the NEEMO crew needs to live, work, and communicate with mission control. Diving suits and oxygen tanks replace spacesuits, and underwater rovers mimic robotic teammates on planetary exploration missions. It also gives aquanauts a good approximation of inconveniences they will experience during long-term, deep-space operations.

The Aquarius provides only 400 square ft of living space and 6 bunks. Cramped quarters are designed to closely resemble those available in modern spacecraft. To further improve on this resemblance, the habitat maintains the same pressure as its surroundings—about 2.5 times greater that the one on the surface. That’s why each NEEMO crew member can work underwater with no time constraints, but everyone who spends more than just a few minutes onboard has to undergo up to 17 hours-long decompression before getting back up to the surface. Having no immediate return option available contributes to the sense of isolation, but it’s all part of the job NEEMO crews sign for. That’s why the program offered a great opportunity to put METS through its paces. 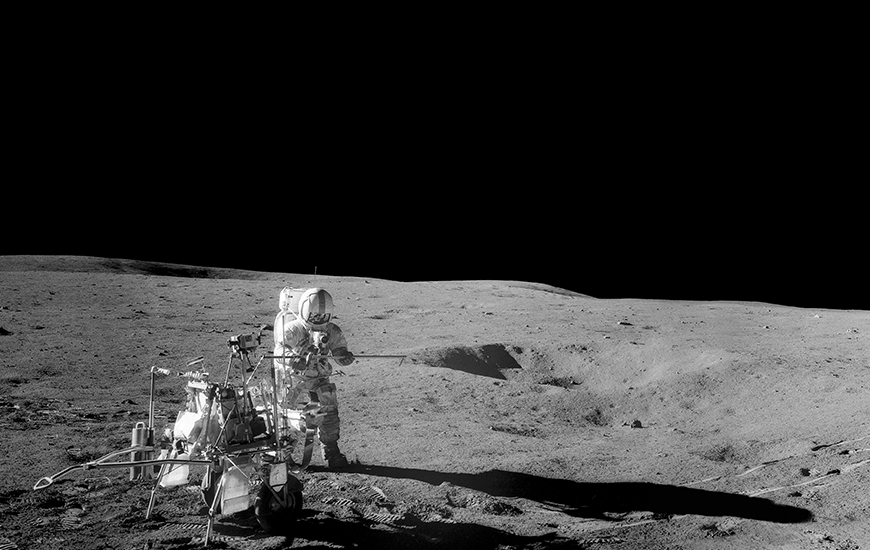 Alan Shepard standing next to MET on the Moon during the Apollo 14 mission. Credits: NASA.

The main challange the NASA JSC engineers faced in designing METS was to make the device robust against a variety of harsh conditions astronauts may encounter on different moons and planets. It was about making it work as a useful aid while eliminating risks of its becoming a burden. History shows it’s easier said than done. 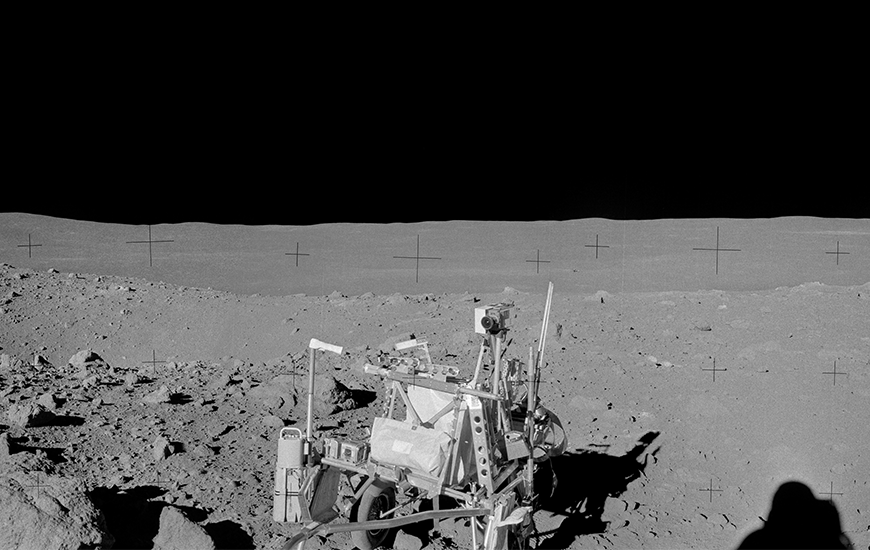 MET on the Moon during Apollo 14. Credits: NASA.

METS’ heritage can be traced back to the Modular Equipment Transporter (MET) Alan Shepard and Edgar Mitchell were hand-pulling across the surface of the moon during the Apollo 14 mission in 1971. The MET was a two-wheeled cart, and worked as a portable workbench with space for hand tools and their carrier, cameras, spare camera magazines, rock sample bags, environmental sample containers, and the portable magnetometer with its sensor and tripod. It all looked good on paper, but in the real world, there have been issues. 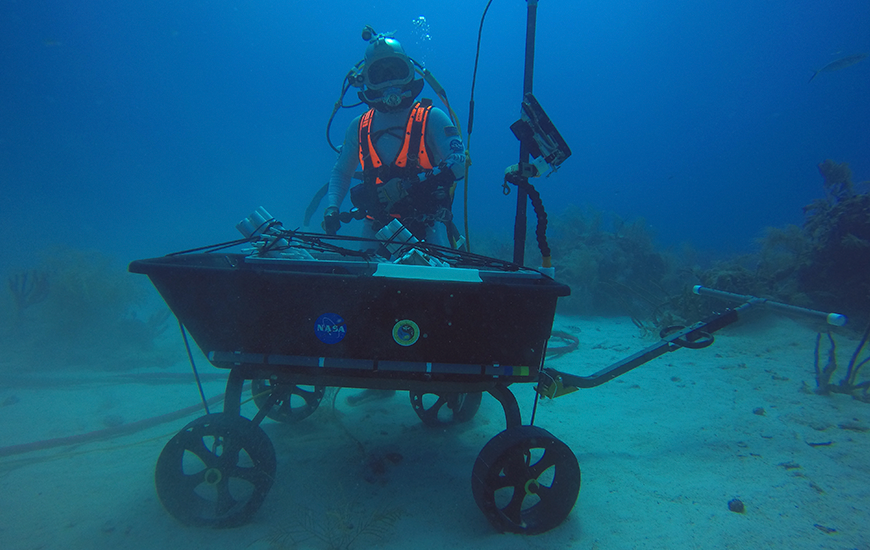 METS, the successor of MET currently under development at NASA’s JSC, undergoing tests on the NEEMO mission. Credits: NASA/JSC.

Nicknamed “the rickshaw”, MET was used only once as it soon got replaced by an iconic, motorized Lunar Roving Vehicle. Its performance was officially described as “accurate”, but both Shepard and Mitchell weren’t particularly happy with the design. At one time during the Apollo 14 they had to carry the thing on their backs because pulling it through the lunar terrain turned out to be impossible. Hence, the modern day NASA engineers had lots to improve upon having another shot at the idea.

Just like on six Apollo surface missions, the ones that involved touching down on the moon, the future crewed flights to other planets will include Extravehicular Activities (EVA’s) to explore the landing site’s area. There are lots of different tools necessary for astronauts to complete their tasks and all of those tools need to be transported to and from the working sites in the most time and effort efficient manner. The cart had to be easy to maneuver, provide situational awareness for both astronauts performing the EVA and the Mission Control Team. Another challenge included making a built-in tablet work in space or in the depths of the ocean which was by no means easy. Moreover METS had to be easy to load and unload for astronauts wearing pressurized spacesuits. To pull it off, the engineers went through a host of prototypes 3D printed on both Zortrax M200 and M300 with Z-ULTRAT. 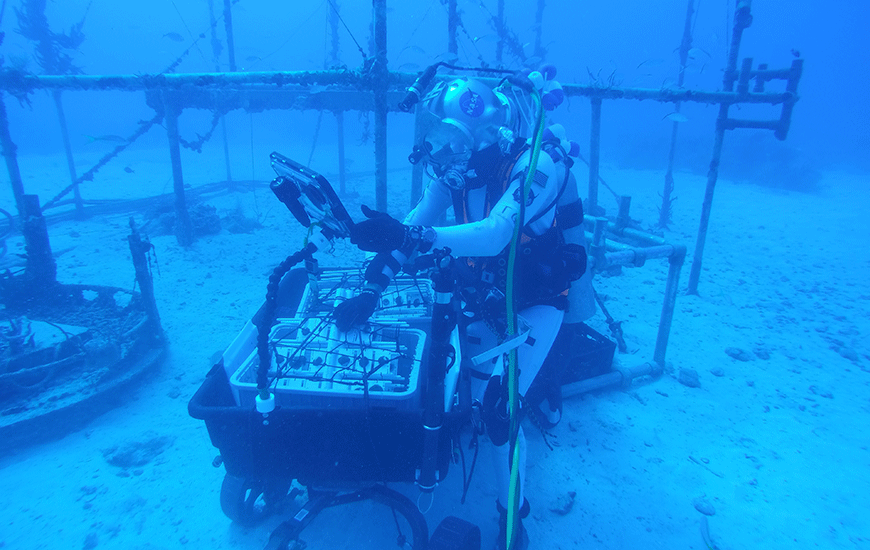 The idea was again to group hardware into exchangeable modules. To understand how to do this, it was important to first understand the planned EVA tasks and all of the hardware needed to complete them. The design process thus began with compiling an exhaustive list of all possible tools and tasks. Once a complete list of hardware was compiled, the items were grouped based on the frequency of use and the EVA task requirements. These groupings were ranged in size and shape to best fit their use. In fact, along with a cart, the team has had to build an entire scenario of how it’s going to be used by astronauts.

METS operations start with the crew leaving the habitat and going to a staging area where all modules are housed when not in use. Based upon the planned EVA tasks for that day, aquanauts load the METS with only the modules needed. The crew then pulls the cart along their EVA traverse path until they reach their destination and park the cart nearby. The crew members can then take the Modules out of the METS cart that correspond to the type of activity they are required to perform at that stop. This reduces the amount of back and forth trips the crew members have to make to the METS cart, saving crew time, and prevents the crew from having to move the cart directly next to the worksite, circumventing potential navigation issues in more challenging terrain and preventing possible contamination of samples. Furthermore, the modules can be taken to areas the larger cart cannot reach and allow for multiple activities to be performed at the same time. Once the tasks are completed, the crew loads up the METS and traverses back to the staging area where they unload the METS and store samples. Finally, they enter the habitat, leaving the METS outside. 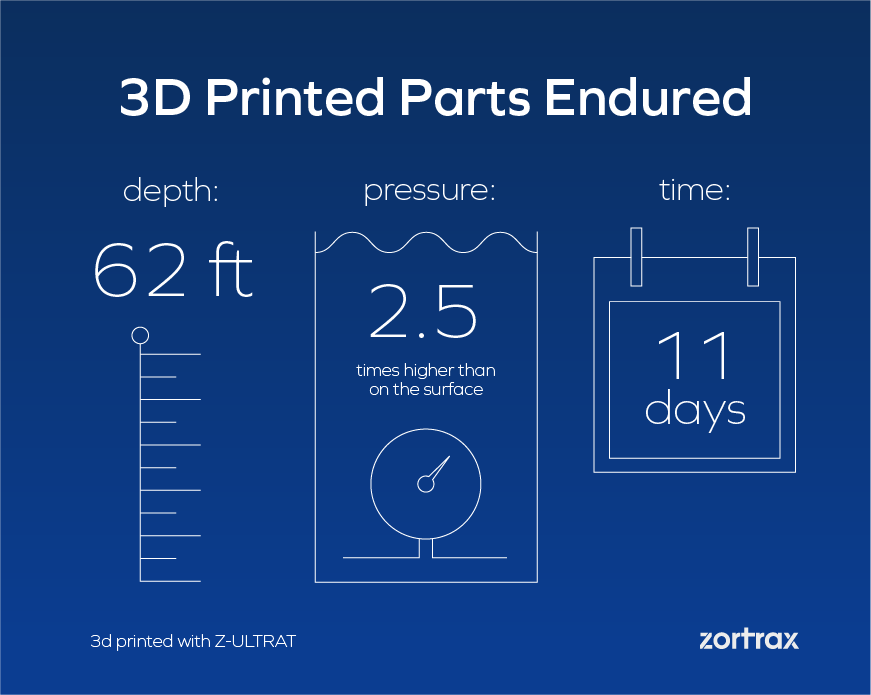 With that scenario in mind, the team used both Zortrax 3D printers to make various working models of possible METS modules. They were first designed in CAD, then sliced in Z-SUITE and 3D printed mainly out of Z-ULTRAT. 3D printing allowed the team to iterate on various possible designs of handles, tool holders, wheels and more. 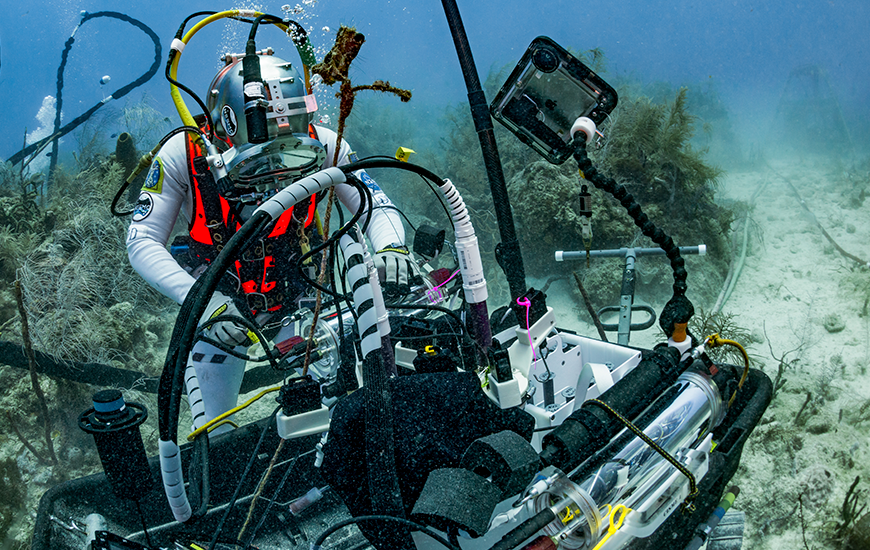 The resulting system consists of several modules packed inside the four-wheeled transporter and two crew-worn modules: one on the forearm and one on the thigh. These held small, lightweight, standard tools and their location allowed for easy access. For instance, the Temporary Tag Module, used to label potential sampling sites, is a pouch that could be carried or worn around the waist, while the Drill Module is a rigid box with handles that sits inside the METS cart. 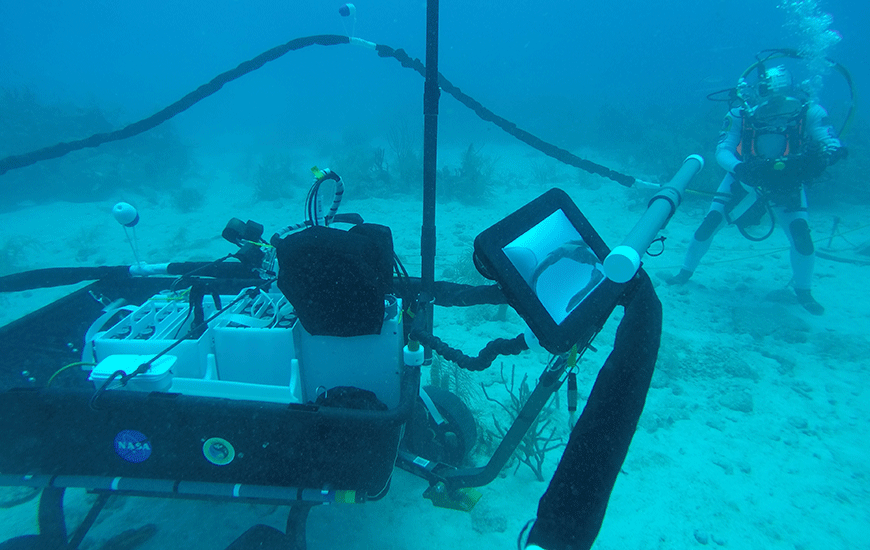 The cart is maneuvered by a handle and outfitted with additional features to assist astronauts on the mission. A camera mount was built on one corner of the METS cart to hold a situational awareness camera which gave the Mission Control team and Intravehicular Activity (IVA) crew member an additional view of the operation.

Another mount was built to hold a tablet in an underwater housing designed quite similarly to the one the team had used for the EVA GoPro casings meant for spacewalks around the ISS. The tablet shows traverse paths, procedures, data about potential samples, and other information for the crew. The mount has a flexible arm for variable positioning and allows for the removal of the tablet if needed. The METS cart is also designed to keep the handle from falling to the ground when not in use, reducing the effort needed in a suit when grabbing the handle. 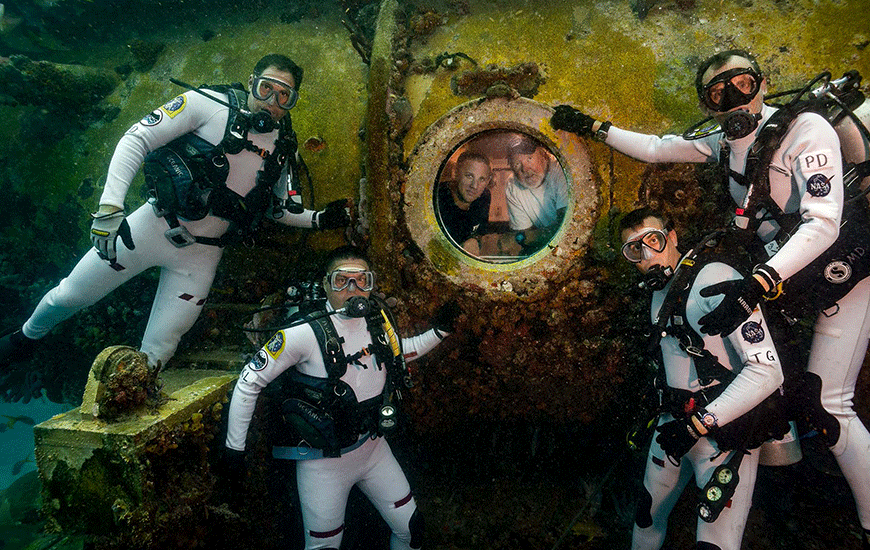 While Zortrax 3D printers allowed to fiddle with various parts’ designs relatively quickly, the work on METS is far from done. Testing the concept at NEEMO enabled valuable feedback from astronauts, scientists, and engineers. It was determined that the METS concept of putting tools into modules has the potential to provide efficiencies and capabilities during EVAs, but could become over-constraining if not well thought through. It requires close integration between EVA hardware engineers, planetary scientists, EVA operation experts, and anyone else involved in EVAs to ensure all pieces of equipment are accounted for when populating and arranging the modules.

This makes it hard to incorporate pieces of equipment that are added last minute and minimizes the ability for crews to adjust the contents of each module in the middle of the operation, as each module is tightly constrained. It’s also important to think through potential contingencies and ensure operational flexibility. Small, lightweight, generic tools could be carried on the forearm, torso, and other locations to provide easy access—this pary of METS worked splendidly. But carrying tools on the thigh (or other areas not easily visible) was challenging due to lack of visibility. The feedback from the evaluations at NEEMO will drive further prototype iterations. Moving the concept closer to a flight design is still going to take lots of work and 3D printed models.