Robotics is one of the fields where 3D printing is used extensively. Thanks to 3D printing — rapid prototyping has become simpler and cheaper. The engineers can quickly 3D print the components they need. Ordering one-off traditional parts would be expensive, sometimes to the point of being impractical. It’s not surprising that, equipped with printers such as Zortrax, both amazing prototypes and the final products can be created. Check 3 amazing 3D printing examples below.

The robotic arm that dances with the Zortrax M200

To show the potential of 3D printing in robotics, Zortrax made a robotic arm with a 3D printer. The arm is made of 18 elements. It’s a fully functional robot with astounding agility. Moreover, anyone can download the files for 3D printing and the assembly manual for free.

To 3D print the arm, the Zortrax M200 3D printer as well as the Z-ULTRAT and Z-ABS printing materials were used. Printing the prototype took 161 hours, 57 minutes. It’s a fantastic demonstration of the capabilities of 3D printers in the field of prototyping. 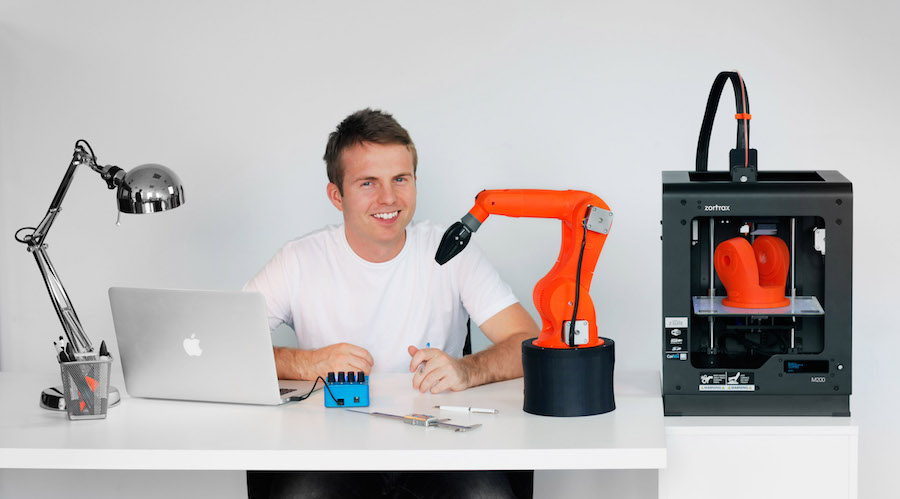 Assembling a robotic arm of this kind with traditional components would have been much more expensive and logistically challenging. A 3D printer, however, made it possible to create a realistic prototype, which performs exactly as the authentic product does. For creators of future devices, 3D printing gives a chance to decrease both cost and risk. Creating fully functional prototypes allows engineers to introduce adjustments at a very early stage of the design process.

The open source project InMoov has been developed since 2012. It’s a robot that looks like a human being. It moves using a Segway and functions with the support of the Arduino controllers. It owes its human-like appearance to its 3D printed elements.

It has already found use, among other places, in a pediatric ward. The robot accompanied children on a virtual trip to the zoo. What’s important is that anyone with a 3D printer can print one for themselves. The project of individual parts for 3D printing is available online. The only limitation is the license, which does not allow commercial use.

California-based Blue Robotics specializes in creating underwater robots. One of the company’s products is a solar-powered boat that is geared to make an independent journey from Los Angeles to Hawaii.

3D printing is used for prototyping components of the autonomous boat as well as underwater drones. At the moment, these drones are among the most accessible devices for seabed exploration. Blue Robotics has managed to lower the cost and time of building subsequent equipment. 3D printing makes prototyping cheap and fast. You don’t need to order parts; you just need to prepare a model and print it.

Prototypes, ready-made projects—there are many ways to use Zortrax printers

The use of 3D printing in robotics and in other fields is not limited to preparing prototypes. Finished products are created based on components made with 3D printers. With the Zortrax M200 printer of the larger Zortrax M300, you can print projects using various materials, limited only by your imagination.