For the first time in 16 years a team of scientists issued a report on state of the art in slicer software. It turns out Z-SUITE 2.1 stands right on top of the hill. We have almost all the bases covered. Here’s why.

Each year a European computer graphics community meets at a high-profile conference which ends up with publishing so called STAR reports covering the latest developments in most vibrant fields. The 2017 meeting happened at Cité Internationale Convention Center, a huge venue for up to 19.000 participants in Lyon, France. One month later, a paper titled From 3D Models to 3D Prints: an Overview of the Processing Pipeline got published in Computer Graphics Forum, a highly regarded, peer-reviewed journal. Authors discussed every aspect of a modern slicer from automatic mesh repairing algorithms to optimizing model orientation and support structures. It was a reality check for us, an opportunity to see where we stood with our work on Z-SUITE. Have we earned our place among the STARs? Sure we have.

In a long line of automatic support generating algorithms some have a record of adding too little, and some are a bit overeager thus lengthening the printing process. The report has most of them covered with all their pros and cons. There’s complex math behind getting the thing right. Hence, in Z-SUITE 2.1 you can choose to generate support automatically and expect the program to do a good job, but for more advanced users, the slicer has also been fitted with an option to edit support structures by hand. Sounds basic only until you get into details.

The latest Z-SUITE’s editable support feature is something you won’t find in the Eurographics report, nor in any other slicer- nobody does it the way we do. It’s not state of the art. It’s going beyond. Support Offset option makes support structures a little larger than elements they’re meant to hold up. This way, it’s a lot easier to remove them after the printing process is done. Moreover, you can place supporting pillars wherever you want choosing their size and thickness. We’re all for the ease of use and making our technology smart. The thing is we also believe a talented human being can be even smarter. That’s why we’ve given you the full control over support structures you can exert with just a few mouse clicks. And it’s been a long time coming. From patents filed by 3D Systems Inc. back in 1988, through research papers published by C.F. Kirshman at Clemson University in 1991, it’s taken nearly 30 years of science to make it that simple.

In the latest 2.1 version of Z-SUITE a mesh enclosing a model is automatically analyzed and fixed where necessary. We’ve made it look easy, but it really wasn’t. Lots of research has gone into algorithms that could analyze a damaged mesh and fix it. Tu Ju, a researcher at Rice University, Texas, has been one of the first to address the issue in his paper titled Robust Repair of Polygonal Models published back in 2004. Ju proposed an algorithm that turned a damaged mesh into an intermediate volumetric representation which then was tessellated again, only more thoroughly. Other teams followed.

Computer scientists led by Stephan Bishop working at Aachen University, Germany, published their own shot at fixing damaged 3D models one year later. Teams at Chinese University of Hong Kong, American University of Southern California, and many more began to throw in their ides to solve it. All of those proposed algorithms had their strengths and weaknesses. Some were amazingly robust but introduced distortions to models. Some managed to steer away from distorting original shapes, but proved to be extremely inefficient and computationally intensive. Hard thing to strike the right balance, but we think we did just that in Z-SUITE 2.1. Bear in mind you have over a decade-worth of research at your fingertips. Even now, though, we keep looking ahead. There are a few things in computer science labs around the world we don’t yet have. But for good reasons.

Thin Walls and Days to Come

Z-SUITE 2.1 can analyze a project and detect walls too thin to be printed. This is to save you trouble and let you know what’s going on. But in the Eurographics report there is one, quite recent, research project that takes the idea one step further. Why, after locating a wall too thin to be printed, an algorithm couldn’t simply make it thick enough to go ahead with printing? A joint American- South Korean team ran some experimental tests to show their algorithm could indeed automatically thicken a surface without introducing shape approximation errors at the region of input. The most important word here, though, is “experimental”. 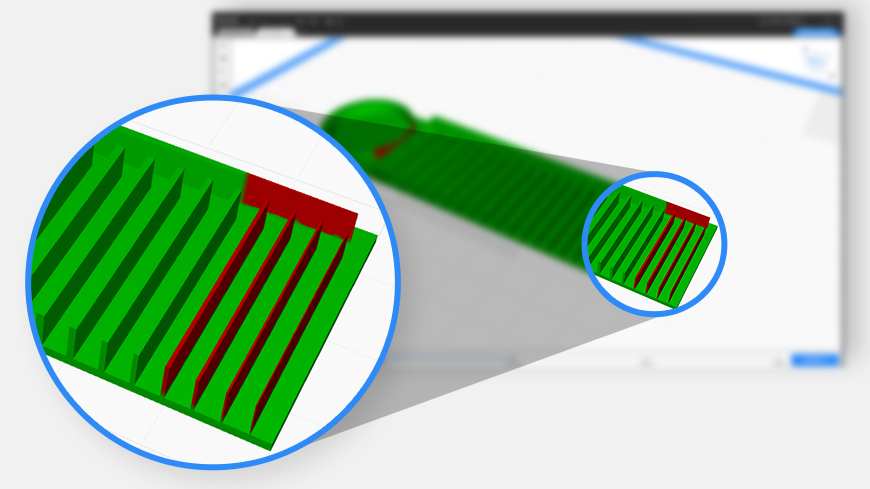 There’s always a delay between promising findings coming out of research labs and rolling those same ideas out into the market. Sometimes this delay can be four or five years, sometimes more. The thing is technologies in their infancy are usually hopelessly inefficient, it takes lots of computing power to run them. Sometimes they work, and sometimes they don’t. To find their way to Z-SUITE, an algorithm has to work perfectly and effortlessly on all hardware configurations we aim to support. It takes a lot of fine-tuning and time to scale a research project up to a production level system. Most of thrilling technologies mentioned in the Eurographics report won’t make it to the market. That’s just how things go in this business. But some of them will. Expect to find them in future generations of Z-SUITE.
You can find more about the features we introduced in the latest version of our slicer in a thorough walkthrough here. And since it’s in the open beta, you can try it out for yourself.