With Halloween fast approaching, geeks of all shapes and sizes everywhere are preparing to unveil their newest costumes and gear. Sometimes a simple mask or a revealing suit will do the trick but for cosplayers that’s just not enough. Creativity is the name of the game here. You have to become the character and not just look like them and when you don’t have the massive budgets of Hollywood movies, that might not be so easy. Still, that won’t stop many dedicated fans from recreating the greatest suits, armors and weapons pop culture has to offer.

In the golden age of pop culture and comic book movies, just about anyone can live vicariously through their characters, it’s not just something reserved for “dorks in costumes”, especially during Halloween or Convention seasons. You might be anyone you’d always wanted to be, starting with spooky monsters, and going through colorful superheroes, manga or video games characters. Literally everyone and everything is fair game.

To stand out in the crowd, you can’t really just rely on your tailoring skills anymore. You’ll need extra manufacturing power to truly become who you wanted to be. 3D printing has quickly become one of the most essential tools for creating armor and gadgets for individuals who want their cosplay to be as realistic and professional as possible. We have compiled a list of our favorite cosplay creators around the web to give you some inspiration for this Halloween season. 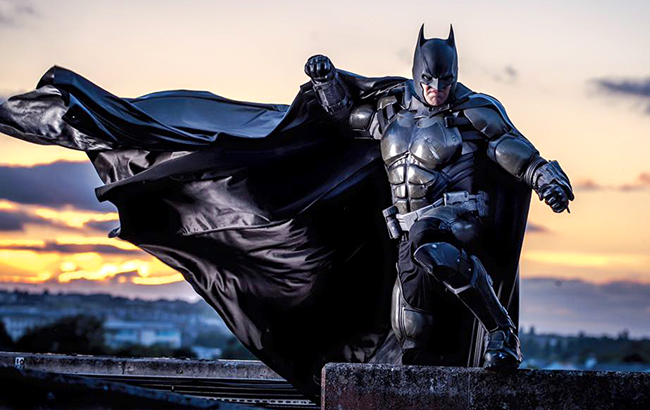 An amazing look at Order 66’s recreated Batcostume, thanks to photographer Kamil Krawczak

The immortal mantra “Always be yourself” might be in stark opposition to the values of cosplayers but as one popular meme says “Always be yourself, unless you can be Batman”. This Irish based company, who has created many designs for cosplayers over the years, took that advice to heart and created one of the most amazing 3D printed suits in recent memory. Created out of the digital designs straight from the Batman Arkham Origins game, it is one of the most closely replicated suits ever made. What’s more impressive than the look and the mere month it took to complete it, is that the suit is practical and can do a lot of the stunts that the real Batman would be able to do. It comes with folding batarangs, a fireball gauntlet and a sonar display. The team is also quick to point out that they got help with 3D printing from an ototyping firm Gauntlet FX and an effects company Tundra Designs, who have made their version of the suit before. Using the technology definitely allowed them to get as much detail as possible and finish the project much faster. ‘There’s the extreme accuracy it gives. We can 100 percent recreate what we see on the screen.’ says Julian Checkley from Order 66 Creatures and Effects. The team has also created costumes of a The Dark Knight Rises’ Bane and Darth Maul as well.

Kamui has been in the cosplay game for a very long time and if you are new to the game you might want to consider visiting her website for some advice and inspiration. 15 years of experience, numerous stunning costumes, 11 books and countless images presenting the process of prop-making will give you an idea of how talented she really is. Together with her partner and an adorable Corgi sidekick, Kamui is creating full-body outfits, as well as accessories. Her most notable entries are the Vault Dweller from the Fallout video game, as well as Nova and Aloy costumes. Her workshop combines many manufacturing techniques and her highly technical youtube channel will clue you into the possibilities of combining 3D printing technology with more traditional EVA foam forming, sewing, painting and many more. One of the videos will teach you how to 3D print and recreate a functional Pip-Boy for the Fallout costume.

Shappi Cosplays as one of her many Overwatch cosplays – Mercy, photographed by Studio Zahora

An incredibly talented cosplayer is one of the best in Europe. Shappi’s a winner of many cosplay competitions and creates costumes recreating a bunch of popular characters from influential video games of all genres. She includes 3D printing technology in prop making and weapon designs for some of her costumes, including the ones she did for her Overwatch characters – Mercy, Mei and Sombra. She does outsource the 3D printing process to her collaborators like Cassius Props or Rav’s Garage but most of the post-processing, such as sanding and painting is done by her. She has decided to use 3D printing mostly for props which have a lot of small details that wouldn’t be possible to recreate without the surgical precision of 3D printing. While the sanding process is time consuming for her, she finds that 3D printing adds a professional touch.

3D printing is a great technology that can work to compliment other techniques and if you have as much creativity as Spoon Makes, you might create some visually amazing designs. She began her 3D printing adventure back in 2009 using it for architectural designs but it wasn’t until 2016 that she seriously started using this technology in cosplay. She likes printing with ABS based materials because of their strength and resistance but she also started working with semi-translucent materials to add a bit of a spark to her costumes. She now uses light to create glowing props, such as the one for her Saber Alter cosplay. Typically she’ll finish post-processing with 1-2 layers of sandable/filler/auto primer before going straight to painting but she has also achieved great results skipping primer on her Torbjorn Cosplay which also glows as if being molten. Her final products are durable and can withstand the high stress of traveling, sitting in hot cars and the rigors of various convention accidents. It looks like the 3D printing will be a stable partner for Spoon Makes for years to come. 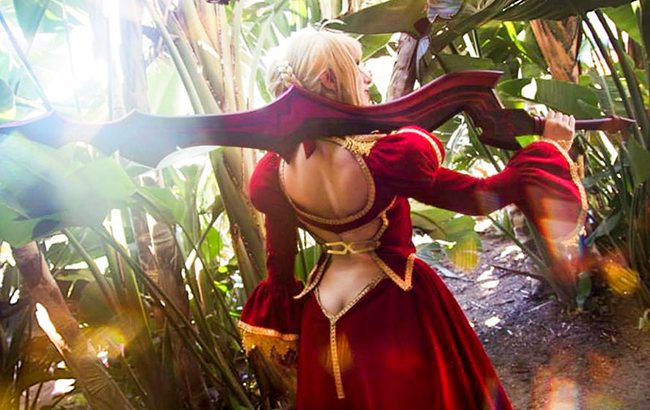 We would also like to promote some of the newer designers and cosplayers around here and Konakai’s potential is definitely something that has caught our eye. They are creating props and weapons for cosplayers that rival some of their more experienced colleagues in their line of work. Konakai uses 3D printing for the same reasons as other creators – it’s detail and professional look. Right after the complex in detail models come out of the 3D printer, they sand the individual printed pieces with a 80-120 grit sandpaper to remove visable lines. When the model is combined from smaller prints the lines that distinguish the pieces apart are removed with bondo which fills the gap between them and makes it seem like one piece. They also use primer to fill in small gaps. Then a very fine sandpaper of 400 grit is used to smooth things out and the prop is ready for painting. Konakai Creations typically works with model Akemi101xoxo and Saffels Photography to showcase their designs, which you can see if you visit their instagram.

After having a look through this list of inspirational costume creators, if you’re interested in more cosplay related materials, you might want to visit our previous coverage of other talented designers such as Dave Nemeth and his Doctor Doom mask or Samuel Bernier‘s retractable Wolverine claws.