The major 3D printing manufacturers compete with each other by providing the users with newer and more updated versions of their products characterized by various properties and innovative solutions implemented. The feature they tend to boast about, apart from the accuracy and precision parameters is the resolution, in this case the smaller the better. But how exactly the resolution may determine the final look and the overall quality of the 3D printed object if at all?

From Theory to Practice

Everything’s possible as long it is an idea on paper. When it comes to tangible results, the real capacities offered by 3D printers manufacturers might not go in line with what had been initially promised. That’s mainly because the overall quality depends on many factors that should be well controlled and adjusted to produce good results and the resolution is only one, however very important, one of these.

The Confusing Definitions: Resolution vs. Accuracy vs. Precision

To start deliberating upon the topic it should be at first clearly defined what the resolution is and what it is not, due to the fact that this may sometimes be confused with the parameters such as accuracy and precision. In 3D printing the term resolution simply describes the smallest obtainable detail in the plane and the lowest layer thickness in the vertical axe. Dimensional accuracy on the other hand shows if the 3D printed model’s dimensions are in line with the ones that were initially set. The precision is in fact yet another value, simply the one that in case of 3D printing can be understood as equal to repeatability. By using the term we think of the capability of a 3D printer to reproduce the movement and thus extrude the layer of material exactly where it was intended every single time.

The Role of Color

As the color of the printing material we use doesn’t have a direct impact on the resolution of the final model it in fact contributes to the ability to see the details of 3D printed objects. It can sometimes be misleading and blur the visible details of a model. It’s simply about the fact that we can see more differences on the light-coloured models and fewer on the darker ones. Everyone who wants to see the details of the object should use colors like e.g. gray and rather try to avoid the black color.

Similar obstacles when it comes to defining the model’s resolution can be encountered in case of models made of a shiny material, for example PLA. That’s mainly because this type of printing material is characterized by ultra shiny finish, which reflects the light more heavily, so in fact the user cannot really see the details on the surface. Compared to the matt surface of ABS, the PLA’s sleek surface makes light bounce off it and causes so called diffused reflection, which simply means that rays are spread in multiple directions so the level of visibility decreases accordingly. To put it simple, the beam stops you from seeing the details of the surface.

Most of the tech specifications of 3D printers show the value of the resolution by giving you the exact number in a measurement as small as micrometers, commonly named microns. To make it really precise one micron stands for 0.001 mm, or about 0.000039 inch. As to many of you this numbers could be too abstract to imagine and to see with your eyes, we hope that the way you can make it more real is to imagine the diameter of a human hair, which has on average from 10 – 200 micrometers.

When it comes to such parameters as resolution, it is first of all necessary to differentiate between the resolution and how it is obtained within each of three axes. When it comes to the planar axes, mainly the X and Y, we talk about resolution in terms of the smallest detail which is determined by the smallest possible movement the printer head can make within one pass. The vertical Z axe is hence responsible for the thickness of a single layer.

What Are Your Goals?

Maybe to some of you it is a vital thing, but the thing that gets quite reasonable here is to state if achieving the finest resolution is worth hassle and prolonging the process? And most of all what is the level of resolution you need for prototypes according to your business. Another thing is that you first of all should take into consideration the best overall quality of your object, which doesn’t always equal small resolution. In case of Zortrax M200 3D printer that supports LPD technology we’ve got this problem solved thanks to the special construction of the extruder that includes hotend – a special heating element with having 3 points of heating and two points of cooling. The first cooling point is responsible for lowering the temperature before the printing material is heaten up, while the role of a second point is to cool down the material during the printing process. It all makes the 3D printing process fluid and effortless.

Is the difference in resolution really visible comparing the models from 3D printers of a similar class but claiming to have different level of this parameter? We assume it will be the most true to compare the prints of Zortrax M200 and the printers of another manufacturer who present its product that is characterized by up to … resolution.

To swing from the theory to practice and show you the real examples of what’s been stated in the theoretical section, we’ve decided to compare the models. We chose 3 shapes starting from the most basic model and ending on the more complex one.

In the picture below we can see two cubes, the one on the left side was 3D printed on Zortrax M200 from Red Z-ABS, the second one was 3D printed with ColorFabb’s Red ABS on another FFF technology based popular 3D printer. Both models were put upside down so you can see the bottom part of the print. The first thing that gets our attention is the surface quality, mainly the appearance of stringing on the second model. These small hairs that are left on the model and can sometimes be difficult to remove are caused by the wrong retraction, to put it more simple the inability of the nozzle to withdraw the material back while changing the position of the print head. All this might be caused by the poor control over the filament extrusion in the Bowden line. 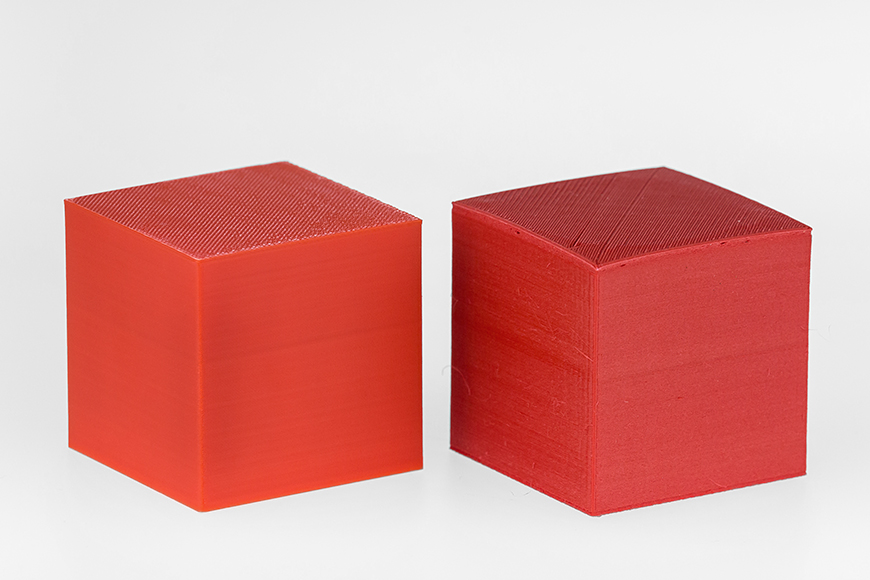 Another visible drawback of the model from the right side is the bottom surface, which is slightly curved on the edges. Such unwanted phenomenon is called warping and is the result of the poor adhesion of the material to the build plate caused partially by such aspects as:  lack of raft, lack of heated plate and wrong calibration of the Z axe. The quality of the bottom surface is also decreased by the visibility of layers that doesn’t stick firmly to each other but are slightly separated.

Differences between the quality of the print are also visible on the 3D printed bearing. This time it is clearly visible how the quality of a 3D printed object impacts its functionality, or in this case reduces it completely. This time we can actually see that having the lower resolution does not translate to the model’s functionality as without the good dimensional accuracy and ability to measure precisely the each element of a multipart object, our projects are bound to be a failure. It is in fact the dimensional accuracy that allows us to estimate the material shrinkage and eliminate it to obtain well matched mechanisms. It gets really essential when it comes to small prints where the spaces between elements are minimal, but still have to be kept due to the functioning of the mechanism. In the picture presented below we can see that also due to the poor quality of the object and the remaining residue of the extruded material the bearing cannot perform its basic functions which is unacceptable in case of functional prototypes. 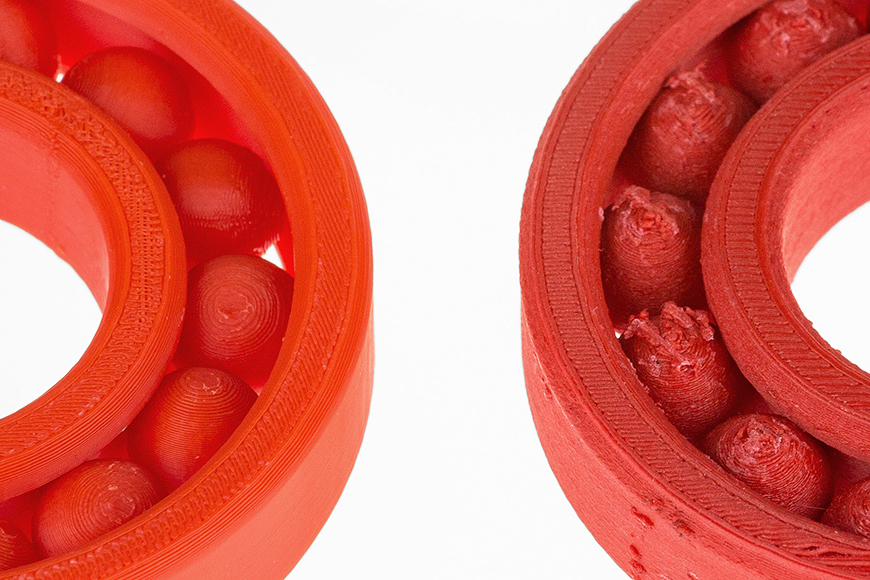 The next example of a movable fish 3D printed as one part is a similar case. The main features that come into play here are accuracy and precision that simply allow the model to move. By looking at the pictures of the two models we can check the difference in the angle under which each of the models can bend.

Due to the unique technology that puts the main focus on precision while applying each layer of material the resolution parameter can be seen from a different angle. In practice this technology allows you to obtain models in higher resolution that looks just like the ones 3D printed with lower resolution. The next great advantage is that the 3D printing process is done much faster with giving you the same, or even considerably better results.

The Design of a Device

This is in fact another key issue that may contribute to the results of our print. The element that gets high in importance and may determine he final look of our model is the feeder, precisely the way how it is connected with the extruder. Without getting too deep into details and the particular type of this apparatus which is usually based on a more or less simple mechanism where a stepper motor divides the movement into steps the printing material can be pushed towards. When it comes to the Zortrax devices this particular element is located on the print head, right above the extruder. This particular solution allows better control over the extrusion and retraction processes, which cannot be guaranteed in 3D printers equipped with Bowden line where the feeder is mounted a the back of the device. In such 3D printers it is difficult to estimate how much material should be pushed forward or how long should retraction be, as the way from the feeder and the hotend is too long and thus poorly controlled.

Yet another thing that should be taken into account is the stability of the rods, in case of Zortrax M200 device there are two of them so it results in better stability of the platform and with greater precision of the feed. It is also achieved due to the fact that the rods are mounted to the frame by lead screws with a special system of auto-lubrication, so the movement is fluid and uniform and doesn’t impact the quality of prints.

The Smaller the Better?

Another thing you should first-hand consider is the fact if the higher resolution will really improve the look of your object. If the model is simple and doesn’t consist of many small details or complex structures, there’s no use in lowering the resolution as it will only result in prolonging the printing time without any visible improvements in the look of your object.

Yet another vital thing to consider is the fact that, again, resolution is one of the main, but not the only factor responsible for the final look of your object. It’s worth bearing in mind that without dimensional accuracy or repeatability, your models will simply represent poor quality anyway.