Lightning Cosplay is a German company designing and making tailored costumes styled after characters present in fantasy literature and mainstream games. The team usually works for triple-A game publishers like Bethesda, THQ Nordic, or CD Projekt. Costumes produced by Lightning Cosplay are showcased by the studios at various events promoting the upcoming titles. The team uses Zortrax Inkspire and M Series 3D printers in their work.

“Today, most of the work we do is for major game publishers”, says Ralf, who runs Lightning Cosplay with Laura, his business partner. Projects typically start with artworks and in-game screenshots featuring the character whose costume is to be made. All those references are provided by the studio placing the order and transferred to Blender, which is an open-source 3D modeling software. A 3D model of the costume emerges from combining multiple screenshots taken at various angles. This way, the team ends up with a completely modeled costume which is then divided down into smaller pieces to be fabricated.

“While I am working on the 3D files I already start to think about which parts we will later print with our Zortrax M200 and which parts we will print with the Zortrax Inkspire. Then I start to split all 3D parts into pieces so that they fit into the build volume of the M200 or the Inkspire”, says Ralf. Thus, the costumes are designed for fabrication in additive manufacturing technologies right from the get-go. The parts are then fabricated on both LPD and UV LCD 3D printers with default settings. “I use default settings because I don’t want to think too much about these kinds of things. That’s one of the reasons we chose Zortrax machines”, claims Ralf.

“As a rule of thumb, you can say the smaller the piece you need to print the smaller the layer height you need to set”, explains Ralf. The team goes for the Inkspire set to the 0.025 mm layer height in small, detailed models measuring less than 2 cm. For larger pieces, that need to be printed quickly, Ralf suggests using the 0.05 mm layer height with makes the printing process significantly faster. “At 0.05 mm the quality is still very good and I save a lot of printing time”, says Ralf. Since even the more crude layer height settings available on the Inkspire still lead to results more precise than what can be done with a standard, extrusion-based machine, the Lightning Cosplay considers it a game-changer in multiple scenarios. “The lowest you can get with the layer height on an FFF 3D printer is 0.09 mm, so using the Inkspire really makes a huge difference, especially in printing small pieces”, says Ralf. 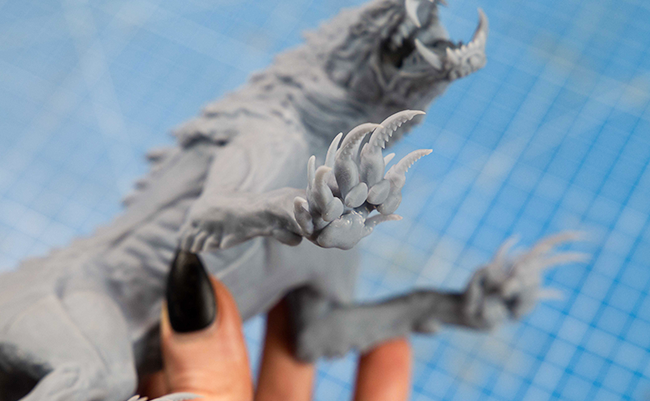 Also, the Inkspire made it possible for Lightning Cosplay to expand to new market niches, other than making costumes. “Because this printer is inherently more precise than all extrusion-based machines, it opened up so many new possibilities”, says Ralf. “We started to try new things like printing collections of small figurines for various video games. The precision of the Inkspire enables us to achieve a sufficient level of detail, even in such small models”.

Once the parts are 3D printed on the Inkspire, Ralf removes the remaining liquid resin with a kitchen paper. Then, the model goes into the Zortrax Ultrasonic Cleaner for a couple of minutes. Once the models are properly cleaned, the team puts them in a self-made UV curing chamber for about an hour. Once the models are UV-cured, they are ready for further post-processing performed to achieve the final looks of the part. 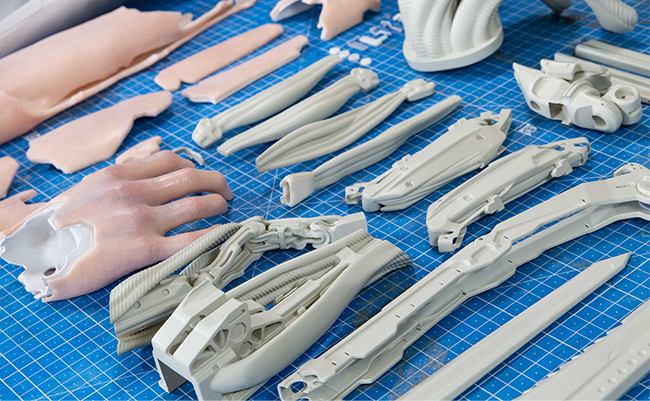 “Each part we print goes trough multiple sanding and priming sessions with different grits”, says Ralf. Once this is done, the parts are painted and fitted onto the costume. The team did not fail to notice, that parts printed in the UV LCD technology on Zortrax Inkspire require significantly less post-processing efforts than the ones printed on extrusion-based machines. “Of course, we apply our post-processing until we are happy with the results. The thing is, with the resin 3D printer we’re just getting there much faster”, says Ralf.

Lightning Cosplay worked with foam and thermoplastic materials before they switched to using 3D printers in their business. According to them, it is still possible to do cosplay without a 3D printer, provided it is treated as a hobby, not as a full-time job. “A 3D printer is not a must-have in our field and you can still have fun without it. But when you start to treat it like a business, work on tight deadlines, and make money out of it, a 3D printer is definitely a way to go”, Ralf claims.

Then, there is a question of choosing the right 3D printer for the job. “There are plenty of budget options out there, so you don’t need to spend a lot of money if you’re just getting started”, says Ralf. “But you need to realize that a cheap machine comes with a lot of work you’ll spend on getting good quality results. If you want to do this on a regular basis, and earn money, you need to get better equipment. Printers like the Inkspire are entirely plug and play and will surely save you a lot of time and stress”, he adds.

According to him, the Inkspire is reliable and simple to operate. “You can easily do whatever you need to do, be it refilling the resin, calibrating the build platform, pausing or resuming a print. Everything seems to be very well designed”, says Ralf.