Most resin 3D printers available on the market work in either DLP (Digital Light Processing) or SLA (Stereolithography) technology. DLP 3D printers offer speed that often comes at a cost of precision. SLA, in turn, is more precise but relatively slow. At Zortrax we have developed a third approach to resin 3D printing. It’s as fast as DLP and even more precise than SLA. Here’s how we’ve made it work.

A standard DLP 3D printer is designed around a digital projector. A light source is aimed at micromirrors that can tilt toward or away from it. Facts Speed of SLA 3D printers decreases inversely to the amount of workspace filled Precision of DLP 3D printers decreases inversely to the amount of workspace used. Zortrax UV LCD works with constant high speed and precision regardless of the amount of workspace used. Arrays of such mirrors known as Digital Micromirror Devices (DMDs) selectively reflect the light towards a system of lenses projecting the image onto a surface with one mirror typically corresponding to one pixel. In a DLP 3D printer a cross section of the model is projected onto the surface of liquid photopolymer to create each layer. The technique is fast because an entire layer solidifies at the same time but the quality usually suffers due to relatively low resolution of projectors used in most DLP 3D printers. 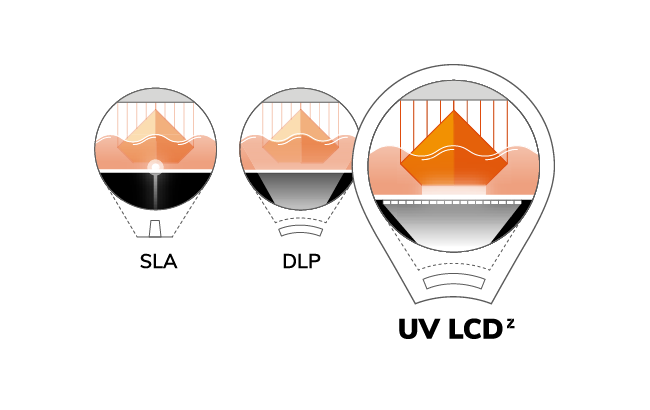 SLA is a more popular technology accounting for roughly 80% of the resin 3D printing market. A UV laser is usually aimed at a mirror movable in X and Y axes which points the beam at the resin to draw a layer. The technique is more precise than standard DLP but slower. Solidifying each layer of the model takes longer because the layer does not solidify all at once. The laser beam needs time to draw it. The difference in speed is noticeable when there is just one tiny model in the workspace of the printer but becomes quite dramatic when more and more of the workspace is filled with models. With the entire workspace filled, SLA technology is roughly 8 times slower than DLP.

By combining the strengths of DLP and SLA we have developed a technology behind Zortrax Inkspire, our new resin desktop 3D printer aimed at professionals working in the fields where small yet incredibly detailed models are needed like dental prosthetics or jewelry design. We’ve made it precise, made it fast, and kept it simple. We call it the UV LCD.

8x the Speed of SLA

In Zortrax Inkspire the light begins its journey produced by an array of UV diodes backlighting a high resolution LCD screen. Traveling up, it then Facts In Zortrax Inkspire, a high-res LCD screen with UV LED backlighting cures an entire model’s layer at the same time. The UV light goes through three stages: horizontally polarized filter, liquid crystals, and vertically polarized filter. Inactive pixels in a layer’s image are perfectly black, there’s no UV light getting through them. .  goes through a meticulously designed system of lenses. The lenses are there to make sure the light is uniformly distributed all over the surface of the LCD filter. To understand what happens next, it’s important to understand the basic properties of light.

Light is a stream of particles called photons behaving like waves in the sea. Instead of vibrating up and down, though, waves of light vibrate in all possible directions. To control the incoming light, the LCD filter processes it in three distinct stages. 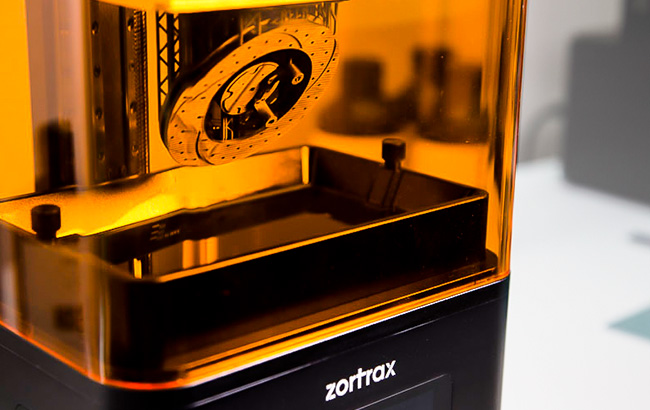 First, the light hits a polarizing film arranged along a horizontal axis. Of the entirety of the light going in, only a part of the spectrum vibrating horizontally gets through. Such horizontally polarized light then goes into an array of liquid crystals. Each crystal can let it pass unchanged or rotate it 90 degrees. In the last stage, the light hits another polarizing film, this time arranged vertically. If a liquid crystal between those two films does not rotate the light, the pixel is off because the horizontally polarized light can’t get through the vertically polarized film. But if the light is rotated, it can pass through both films and the pixel is on. Millions of such pixels create each layer of the model in Zortrax Inkspire. 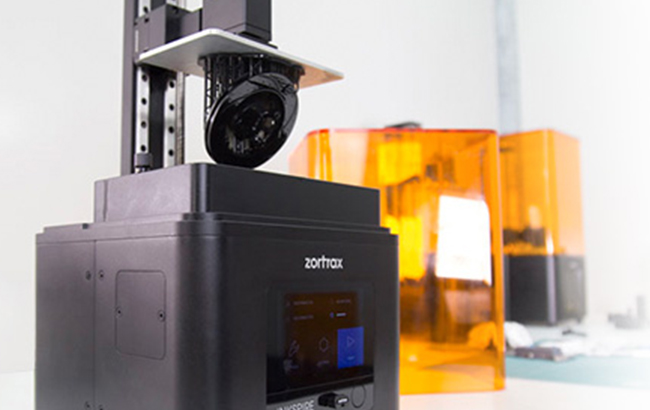 This way, an entire layer is projected onto the photopolymer’s surface all at once. That’s how we have made Zortrax Inkspire up to 8 times faster than a leading SLA 3D printer. Making it more precise was a matter of numbers.

9x the Precision of SLA

The transparent rook is printed on a leading SLA 3D printer. The black ones are printed on Zortrax Inkspire.

Because standard DLP 3D printers usually project images in crude resolution, the models come out with visible layering and sometimes eve visible vertical lines. We have solved this by getting the resolution high enough for the individual cuboids to be indiscernible for human eye from a reading distance. Basically, we have applied to 3D printed models the same standard Apple uses for their Retina screens. When an image exceeds 336 dots per inch, we can’t see individual dots without a magnifying glass. Models made on Zortrax Inkspire can easily exceed this value when viewed both vertically and horizontally.

That’s what makes Zortrax Inkspire a precision instrument for engineers working in various industries from aerospace to consumer electronics. The printer is also perfect for rapid prototyping of tiny yet incredibly detailed products like jewelry or dental prostheses. But there are more possible applications. Working with relatively small models like HDMI cover caps, one Zortrax Inkspire can 3D print 77 of them in 51 min. 30 printers working together in a 3D printing farm can offer an approximate monthly output of 650,000 to over 1,000,000 parts (depending on how many shifts per day are scheduled). This is how Zortrax Inkspire can take a business way into medium or even high scale production territory. And recently, the Inkspire has made it to the top 3 of the Aniwaa’s best resin 3D printers ranking.