Undo Systems is a Spanish company offering rapid prototyping and on-demand manufacturing services. For over a year, it has been involved in developing the Smart Spot, a device with various different sensors feeding data to smart city management systems. To prototype and manufacture precise parts for electronics running in the Smart Spot, Undo Systems used the Inkspire, the most precise of all Zortrax 3D printers so far.

Smart Cities is an idea to use advanced technology to optimize functioning of various urban services like traffic management, street lighting, and so on. It relies on gathering data from multiple sensors located at multiple spots in the city and feeding it to control centers which can either take autonomous actions based on such input, or aggregate it in a palpable manner to help local authorities make better, more informed decisions. 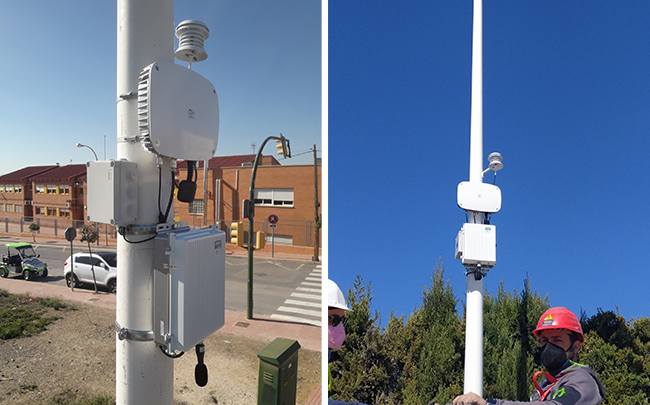 Hopu’s Smart Spot with parts 3D printed on the Inkspire installed on a street in Murcia, Spain.

In a smart city street lights can be switched on and off exactly when they are needed based on data gathered from light sensors. Traffic lights can be managed dynamically based on how many cars and people are commuting at the moment in any given area. Authorities can actively monitor air quality and take preventive actions if it deteriorates below safe thresholds and so on. 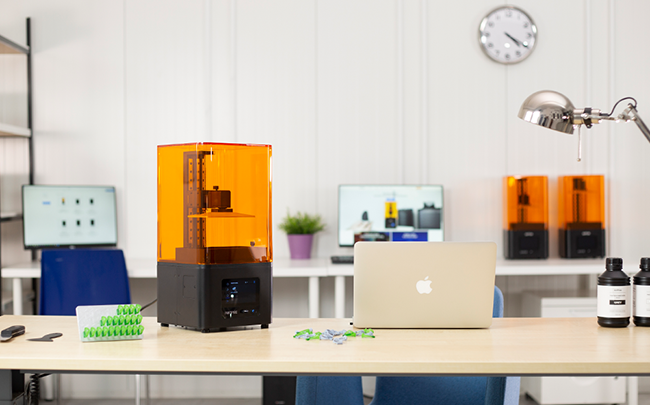 “Because the idea is aimed at better resource management, it’s got significant funding from the EU. With this funding, Hopu Smart Cities, a Spanish tech company, created blueprints for a smart city management system and all its building blocks, Smart Spot included. Finally, Hopu hired us to help them prototype and build the first small series of Smart Spots. And because, at this point, they needed no more than a hundred of Smart Spots, 3D printing was the only feasible manufacturing technology for this project”, says Iban Muñoz from Undo Systems.

How to  Optimize a Design for Resin 3D Printer

Smart Spots needed to meet certain criteria. The device had to work outdoors and require as little servicing as possible. It also needed to house all the sensors, connectivity, and power supply. 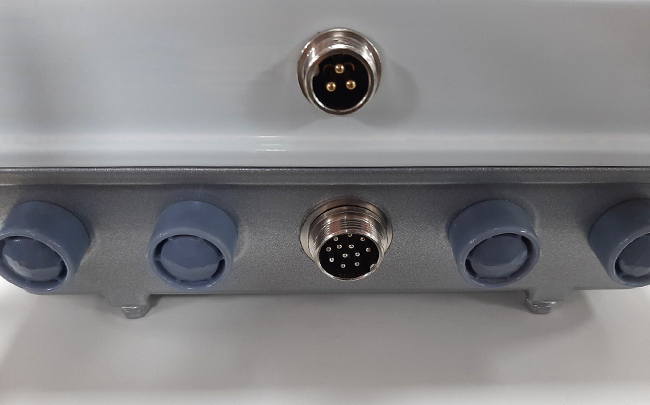 “We considered various 3D printing technologies but finally opted for the Inkspire UV LCD 3D printer for two main reasons. First, with its 50 by 50 microns XY resolution, it guaranteed we would get the precision necessary for electronic devices. Second, because the printer works with constant speed regardless of how many parts are squeezed on the build platform, it was fast enough”, says Muñoz. 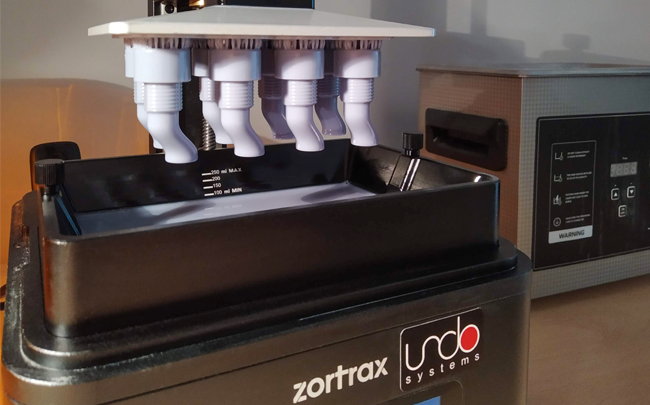 To maximize manufacturing output, Undo Systems printed the parts in batches filling the entire build platform of the Inkspire.

To speed things up even further, Undo Systems designed all the parts specifically for the Inkspire. This way, they managed to get rid of almost all support structures. According to Muñoz, in many cases it was impossible to manufacture such parts in any other technology. 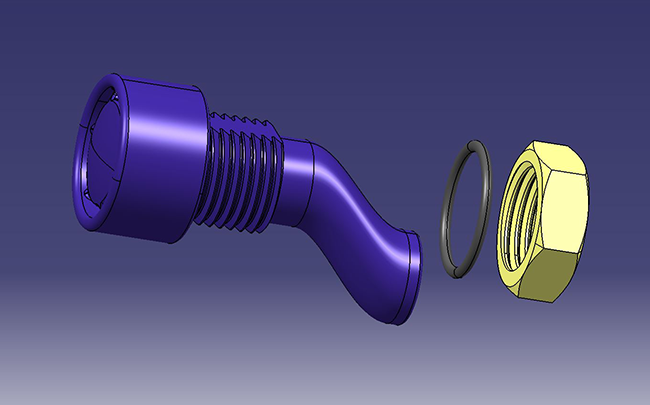 Undo Systems designed parts for Smart Spot with resin 3D printing in mind to streamline their prototyping and manufacturing processes.

“The Inkspire proved very cost-efficient. We used the Zortrax Resin Basic Grey for our parts and, depending on the design, we could offer a price per part ranging from 20 euros to 50 euros. Given the limited number of ordered Smart Spots, using injection molding was out the question and CNC machining was unfeasible due to the parts’ geometry”, claims Muñoz. 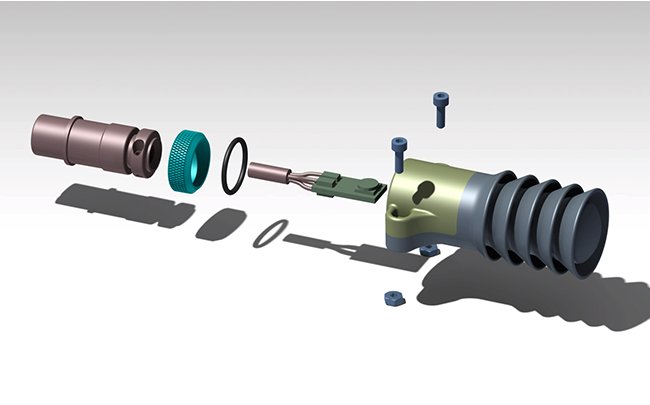 The Inkspire 3D printer has been used to print complex parts difficult or impossible to make with traditional manufacturing techniques.

The only problem that Undo System faced was relatively fast deterioration of resin 3D printed models caused by UV light exposure. They solved this problem by covering parts with a coating specifically designed to offer UV light protection.

“Hopu Smart Cities is located in Murcia, a city in the south of Spain, and they are going to install their first management system there. This is still a part of this EU funded project”, says Muñoz.

A batch of parts for Smart Spots 3D printed and covered with coating protecting them from UV light.

When the project ends, however, Hopu is going to need to find a way to offer their smart city solutions commercially. According to Muñoz, they are very likely to stick with 3D printing even at this later stage in their business plan. 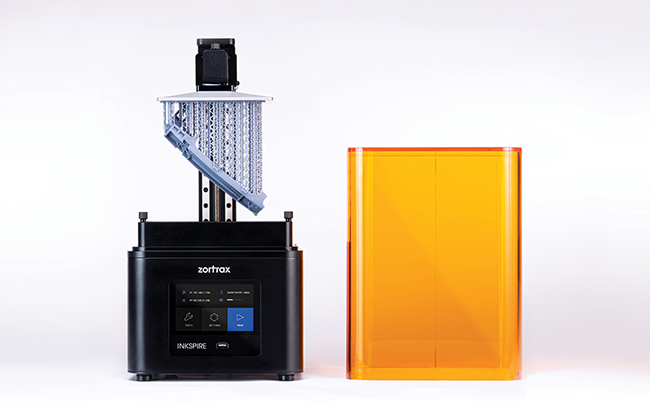 Zortrax Inkspire 3D printers are almost entirely sold out. Some Zortrax Resellers may still have them though!

“Devices for smart city management systems are never going to be made in large quantities. These are niche, custom-made products. So, I guess the most reasonable way forward for Hopu would be to get a farm of 3D printers and make their Smart Spots this way. We could easily fabricate over a hundred of parts using just one Inkspire. But I find this is easily scalable. When you need to increase the production volume you just need to get more printers”, says Muñoz.

It is the last moment to buy Zortrax Inkspire 3D printer! Zortrax has this 3D printer completely sold out but it can still be found at our Resellers. You can find the one closest to your location on https://zortrax.com/find-reseller/