3D printing has been invented back in the 1980s as a rapid prototyping technology. Back then nobody thought of using 3D printers for production because they were too expensive. Today however, 3D printing has become cost-effective enough to offer medium to large scale manufacturing capabilities. Here’s how printing with Zortrax Inkspire resin UV LCD 3D printer can be scaled up to reach 650,000 to over a 1,000,000 parts of monthly output.

Why SLA 3D Printers Are Difficult to Scale Up?

Currently, roughly 80% of the resin 3D printing market belongs to SLA (stereolithography) devices. They offer relatively high quality of prints but they are hard to scale upFacts SLA technology relies on the laser to draw a layer on the photopolymer’s surface. Because a laser has to cover all lines constituting a layer, an SLA 3D printer slows down when there are more lines to cover. A leading SLA 3D printer needs under 2 hours to print one HDMI cover cup, but 8 h 16 min to print 105 of them in one go. to offer significant manufacturing output. The reason lies in their working principle. An SLA 3D printer uses a laser to draw models’ layers on the surface of photopolymer resins. They work similarly to FDM machines in that a laser beam, just like an FDM nozzle, needs time to cover all the lines constituting a layer. The larger the layer, the longer the distance a laser beam has to travel to draw it. That’s why the speed of operation of SLA 3D printers is in inverse proportion to the amount of the workspace used by the model. This is a deal breaker when it comes to mass production.

Let’s think about HDMI cover caps. Such caps are usually used as a safety measure preventing dust from getting into HDMI ports of various devices. Printing one such cap doesn’t take a lot of time for an SLA 3D printer. It will do it in about 2h. But, because the SLA technology slows down when the number of models rises, printing 105 caps (filling the entire build platform) in one go takes 8 h 16 min. Now imagine 30 such 3D printers making those caps for a month. With an 8 hour long working day, they could produce roughly 93,000 caps. That’s seems like a lot but there are two issues two consider. 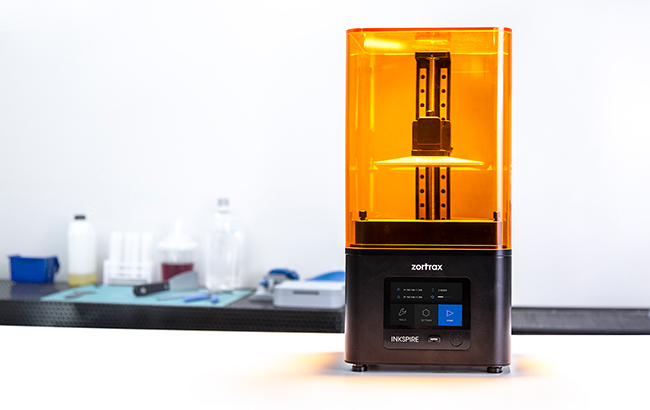 Zortrax Inkspire, unlike SLA 3D printers, doesn’t need a laser to cure photopolymer resins. An entire layer of the model is cured all at once by a high resolutionFacts In Zortrax Inkspire, the entire layer is displayed all at once on a high-res LCD screen with UV LED backlighting. One HDMI cover cap 3D prints in 51 min while 77 of such caps 3D print in the same time. A farm of 30 Zortrax Inkspire 3D printers can offer a monthly output of 650,000 to way over 1,000,000 HDMI cover caps depending on how many shifts per day are scheduled.  LCD screen with UV LED backlighting. That’s why it doesn’t matter how many HDMI caps are printed in one go. Printing one takes 51 min, which is slightly faster than on a leading SLA 3D printer. But printing 77 of them takes the same 51 min. 30 Zortrax Inkspire 3D printers can make 650,000 caps per month with an 8h long working day. Now, because all Zortrax 3D printers are made of high-quality parts, they can operate incessantly for long periods of time. Therefore, it is possible to increase the number of shifts per day and run the printers 24/7. In such scenario, a monthly output of 30 Zortrax Inkspire 3D printers can jump up to way over 1,000,000 parts or higher.

Such arranged 3D printing farm offers large scale production capabilities on demand. Of course, making those caps in way larger quantities at traditional manufacturing plants is even more cost-efficient. But the cost per unit becomes lower in comparison to 3D printing only when the order amounts to millions rather than thousands of items. The 3D printing farm also brings unparalleled flexibility to the table. Each and every one of those 650,000 parts can be made different at no additional cost.