Süß & friends is a German 3D printing company, providing creative guidance and manufacturing solutions for the production of parts. It has recently used Zortrax Inkspire resin 3D printer while developing a flipchart designed by an interior and product designer Yannick Fiume. The creators’ ultimate goal was not only to achieve a multi-functional and good-looking item but also to eliminate the typical issues generated by products of this category, which are, most of all, problematic storage and transport. Moreover, the vast majority of flipcharts so far encountered, as noticed by Fiume, have been „bulky and unsightly” so Süß & friends desired their product to be just the opposite. This is how they managed to achieve this.

The picture shows a rendering of the flipchart (on the left) and the final product (on the right).

At the beginning, the company brainstormed the creative ideas with Fiume, establishing how the flipchart should work and what it should look like. This is when the first sketches of the product appeared. Here, thanks to the use of up-to-date digital solutions, such as the cloud, Süß & friends was able to actively cooperate with the designer. „Through technologies like cloud-based design software, the communication with the designer was easy and effective and Mr. Fiume was engaged in the developing process right from the start,” underlines Philipp Süß, the engineer and founder of Süß & friends.

The first hand sketches appeared right after the designer Yannick Fiume and the team at Süß & friends had brainstormed their visions of what the flipchart should look like.

Having agreed on the looks and technical properties of the flipchart, the sketches were converted into a digital model with the use of CAD software. The digital version of a product could be easily viewed from any device with Internet connection and any alterations could be introduced on the spot, which facilitated the whole process and made it more cost-effective: „This process not only saved us time, but also money. After the first digital version of the flipchart bracket was finalized, we started to produce the first prototype,” says Süß. Next, the prototype was turned into a physical object by 3D printing technology, with the use of a high resolution resin UV LCD 3D printer – Zortrax Inkspire, and then demonstrated to the client. 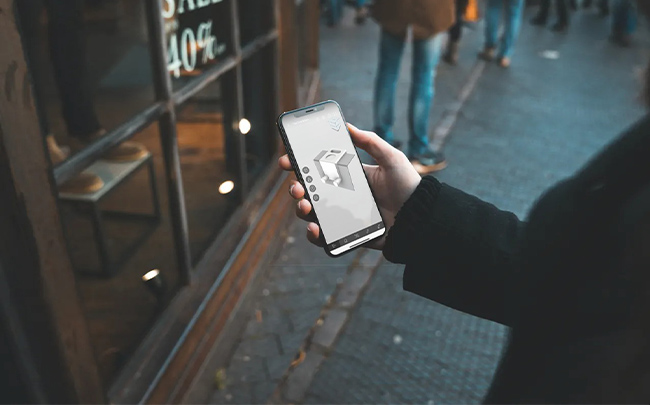 The workflow of creating the target product and its cost have been significantly facilitated by the use of cloud-based solutions in the iteration process.

3D printing allows for a quick conversion of renderings into real life pieces, crucial in an iteration process, which does not come unnoticed by those dealing with design and manufacturing. „Things like the feel of the product, the feedback that the user gets when using it and the appearance in connection with the other components are a large part of a good product design and cannot be fully experienced only through renderings,” Philipp Süß claims.

The model, created in CAD software, has to be transferred to Z-SUITE (left) which slices it and prepares for the 3D printing process (on the right, an engineer operating the Inkspire).

The material for 3D printing, picked by a German studio was Zortrax Resin BASIC due to its solid surface quality and short curing times. The creators applied 0.1 mm layer thickness to all their first prototypes, because it allowed them to significantly reduce printing time without the need to sacrifice the quality of prints. „We could print a complete set in about 2.5 hours with these settings, which is quite amazing,” Süß says. „Zortrax Materials come with a standard set of parameters and I found that these work great for most use cases. And if, for some reason, you need something special, it is easy to change some parameters and optimise them to suit your requirements,” he adds.

In order to prove the functionality of the 3D printed item, it had to undergo a series of tests. Having the physical models in their hands, the developers were able to see what vital changes had to be brought in to the project for its optimization. During a testing phase, it occurred that some parts were protruding too much from the rest of the flipchart. Hence, the second concept of the brackets was coined, where the initial hooks were replaced by a screw connection. „We have replaced the previously visible mounting screws that fix the pen holder with a single screw that is concealed by the magnet. This makes the entire surface of the holder smooth and underlines the minimalist design,” the engineer states.

The 3D prints, produced with the use of Zortrax Inkspire, have undergone resistance tests to prove their quality and durability.

The third 3D printed concept proved to be the final one. The creators, knowing that no further changes will be made, opted for the highest resolution layer while printing the flipchart model. What they had in mind since the very beginning, was that their design was going to be 3D printed in series production. The process was hence optimized in such a way to obtain a durable yet lightweight object. As Süß highlights, „We only used a minimal amount of the material, maintained a uniform wall thickness and made sure our flipchart needs very little support.” The parts printed by them also had no infill as they were perfectly satisfying without it.

After 3D printing, the creators mechanically cleaned the models from the support structures to make sure they have a smooth, even surface all around. 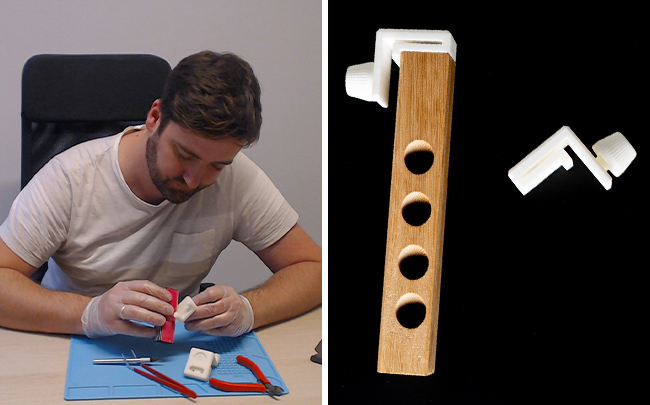 While post-processing the prints, Süß sands the models to give them an even and smooth surface.

With the 3D printed final design at their disposal, it was now the time for Süß & friends to decide on the target materials and then start series production of their innovative flipchart. The creators went for polyamide material and selective laser sintering as a manufacturing method for the final version of the product. They agree that such a quick and problem-free prototyping process as well as an agile initiation of a series production wouldn’t have been possible if it weren’t for 3D printing.

„3D printing enabled us to quickly present customers with working prototypes, give them new design freedom, and make the flipchart clip economically. Functionality combined with minimalist design is no contradiction with 3D printing,” Phillip Süß underlines, and the product designer, Yannick Fiume, adds that “3D printing has proved indispensable in modern prototyping,” and has no doubt he is going to take advantage of it in the future. 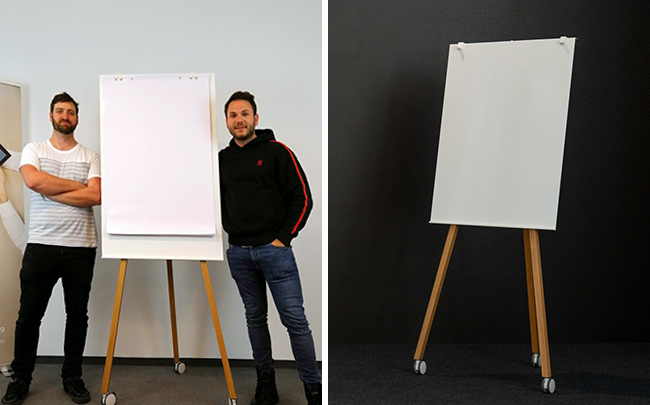 Philipp Süß, a founder of Süß & friends with Yannick Fiume, the designer of a flipchart on the left, and the target product on the right.

Do not miss our sale: only until the end of August you’ll get the Inkspire precision UV LCD printer 25% off!