France’s Martin Fourcade claimed gold after finishing 12 seconds ahead of Sweden’s Sebastian Samuelsson in the men’s biathlon 12.5 km pursuit at the PyeongChang 2018 Winter Olympics on Wednesday, February 14. Out of seven top biathletes in the competition, Fourcade was the only one who had a flawless final shooting round. His rifle had been designed by Athletics 3D – Olympics & Fitting, a French company founded by Clément Jacquelin, a Youth Biathlon World Champion 2009, and prototyped on the Zortrax M200 3D printer working with Z-ABS material.

Way of the Champions

“I have been a top athlete myself, a world champion”, says Jacquelin recollecting his own achievements in biathlon. However, instead of pursuing a career in professional sports, he decided to go into technology. “Seven years attending the top French engineering university programs left me with sufficient knowledge to make top-tier sports equipment”, he claims, “we started Athletics 3D to share our expertise, and put everything we know about ins and outs of biathlon into our products”. And there was a lot of this expertise needed to design a professional biathlon rifle. 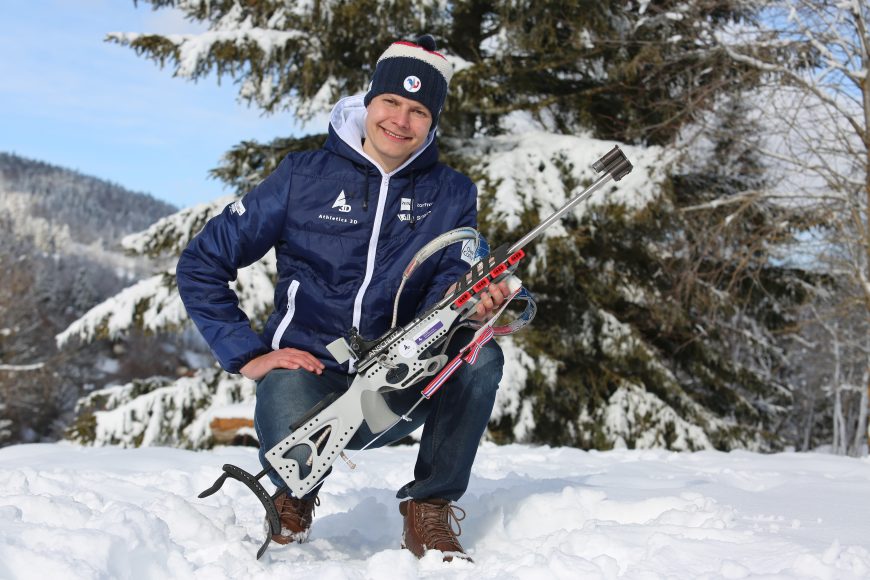 Weighing at least 7.7 lb—ammunition and magazines not included—biathlon small-bore rifles are either bolt or Fortner action which means handling the cartridges into and out of the weapon’s barrel chamber is done manually by manipulating the bolt handle. The handle has first to be rotated upward, then drawn rearward, pushed forward again, and rotated downward to complete the loading cycle. The Fornter or straight-pull variant simplifies this procedure down to moving the handle back and forth—two moves instead of four to increase the rate of fire. But at the end of the day it all comes down to marksmanship.

The target range shooting distance in biathlon is 160 ft. Five circular targets to be hit in each round are only 1.8 in in diameter when shooting in the prone position, and 4.5 in when shooting in the standing position—very small, given the distance. Another important factor is fatigue. In a pursuit, there are four shooting bouts. To make things even harder, only the first two are done in the prone position. The final shooting rounds, when people are extremely tired, are done standing. “That’s why ergonomics are extremely important”, says Jacquelin.

Shooting at the Gold

Biathlon rifles have modular construction. Each part can be replaced with the one designed differently to better suit conditions an athlete is about to face in a particular race. Hence, Martin Fourcade had many different configurations to choose from. “For his gold winning run, he used the variant with a white stock, you can clearly see that on TV”, says Jacquelin, “it was the one we made for him”. According to him, Fourcade used to shoot with a similarly designed weapon in the past, but wanted to have it a little bit lighter. Athletics 3D got a contract to build it.

“We have made several 3D printed prototypes”, says Jacquelin. The majority of effort went into designing the stock. First various different versions were modeled in CAD. The the designs went into Z-SUITE to be sliced and fed into the Zortrax M200 3D printer with Z-ABS material. “Zortrax Ecosystem did a great job prototyping the thing. We could get the feel right, the dimensions, the ergonomics”, claims Jacquelin. According to him, the most important part about the 3D printing technology is that it allows for iterating through many different concepts rapidly at low cost. Moreover, people working at Athletics 3D found it easy to work with and surprisingly user-friendly. Then there was testing.

Every 3D printed model was personally tested by Jacquelin. Being a former world champion, he could precisely determine which concept would work well in competitive biathlon shooting. Once the final design was chosen, it was sent to Athletics 3D’s partners. “We work with the world’s leading manufacturers specializing in high-end sports equipment. It was their job to build the stock with intended, end-use materials”, explains Jacqueiln. “But it all starts with extensive prototyping, and for prototyping we have been using Zortrax equipment since 2015”, he adds.