Open Breath is a project aimed at building an open-source, fully-functional lung ventilator ran by a team of Italian engineers based in Turin. “I want to make one thing clear. We are not trying to build an automated ambu bag. We are building a professional medical device complete with sensors and multiple advanced modes that should be capable of ventilating a patient at a hospital for up to a month which is often necessary in treating COVID-19”, says Simone Iannucci who’s one of the founders of the Open Breath Project. Zortrax has recently backed the Open Breath with the M300 Dual LPD Plus 3D printer and a supply of necessary filaments.

“Currently we are at or slightly beyond the peak of the COVID-19 outbreak in my country”, says Iannucci. And numbers back him up starkly. So far, the pandemic took over 24 thousand lives in Italy, and the number of new cases oscillates around 3 thousand every day. “That’s why we can’t afford to lose even one day. 3D printing enables us to save time”, he adds.

But the project ran into problems that could cause significant delays. The ventilator was initially intended to be made with sheet metal. More geometrically complex parts were supposed to be CNC milled out of steel. “But then the pandemic progressed to the point where government imposed several restrictions on the economy. Companies we had been working with got shut down suddenly and we were left without necessary parts and resources”, explains Iannucci.

According to him, CNC milling of the ventilator components started to hinder the project’s progress as parts needed to be ordered and sent to the assembly workshop which, at times, took several days. “At that time, Massimiliano D’Amario, an engineer working with us from day one who has a significant background in additive manufacturing suggested using 3D printers. Basically we began 3D printing all the parts that we previously wanted to make with CNC milling. This saved us lots of time”, says Iannucci. That time was used to perfect the machine itself.

The ventilator that Open Breath engineers are building is an advanced and pretty complex piece of machinery. And it has to be that way. “There are a lot of other teams out there that try to make ventilators simply by modifying ambu bags”, says Iannucci. An ambu bag is a relatively simple, manually operated handheld device commonly used as first aid equipment in ambulances. “Do a little tinkering and you can automate it by connecting it to a windshield wiper engine. But we have talked to doctors and they assured us that such a solution would be useless beyond the first couple of hours”, claims the engineer. 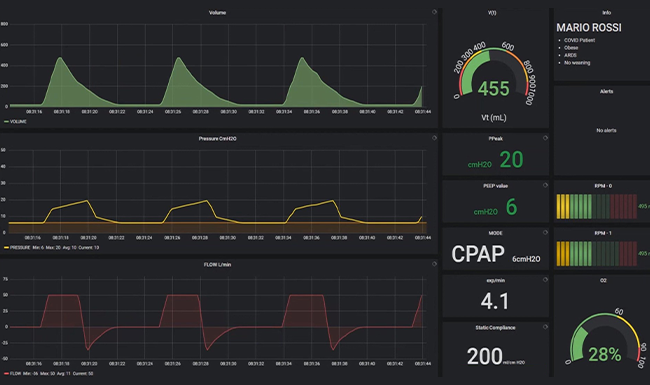 That’s why the Open Breath ventilator will come with all more advanced functionalities. Examples are precise controls allowing the doctors to set the rate of pumping and the exact pressure of air getting into the patient’s lungs. The team also implemented the SIMV (Synchronized Intermittent Mandatory Ventilation) mode. This mode, otherwise known as breath triggering is used in commercially available ventilators when the therapy is close to an end and the patient is about to be disconnected from the device. “Therapy-wise, triggering mode is very important as the goal is to enable the patient to live and function without artificial life support” explains Iannucci. Ventilating parameters can even be monitored and controlled remotely to reduce the time spent on visiting the patients.To make this a reality, the Open Breath team had to design everything from scratch, from hardware, through control systems, to algorithms running the device. “That was a huge challenge and we’ve got lots of support from the industry and universities. We even have engineers usually working at CERN in Geneva, Switzerland, consulting our ideas and giving their input. CERN guys are extremely helpful, one of the brightest minds on the planet”, says Iannucci. What’s more the ventilator needed to be relatively low-cost, esy to make and assemble, and simple to operate.

The M300 Dual LPD Plus 3D printer Zortrax sent to support Open Breath is a large format machine capable of printing interchangeably with two filaments: one for the model itself and the other for water soluble support structures. With no need for mechanical support removal, the M300 Dual can print parts that are both geometrically complex and relatively large. Both those features proved crucial in the ventilator.

“The Open Breath project forked into two paths. The first is the one we took originally and assumes that the ventilator will be made with metal parts. For this design we employ 3D printers in their most traditional role, namely as rapid prototyping tools”, says Massimiliano D’Amario, an Open Breath engineer responsible for running 3D printers. But when the metal parts started to become harder and harder to obtain as Italian economy was gridding to a halt, D’Amario concluded that it was possible to use 3D printed parts in a final, end-use ventilator, thus bypassing the problem.

“Of course, this switch necessitated some design changes and therefore now we have two parallel projects currently under development”, says D’Amario. In the 3D printed version, the components we made on Zortrax 3D printers include casings for engines and encoders. Both need to provide good insulation and shield the equipment from vibrations. “This is where dual-extrusion and large build space become really crucial”, D’Amario claims. “We print parts that exceed the dimensions of my Zortrax M200. Using the smaller printer would force us into making significant design changes. The parts would need to be designed with bolts or other elements included solely for the purpose of assembling two pieces of the same thing together”.

But size was one thing, and complexity was quite another. “We print things with complex internal architectures. This means there are hardly accessible spots in our models and it would be impossible to effectively remove support structures from there. Soluble support materials solves this problem, since rinsing the models allows us to easily remove supports from volumes partially trapped in the part” explains D’Amario. According to him, parts printed on the M300 Dual are both more precise and mechanically stronger than they would be if they were printed on a smaller, single-extrusion machine.

“It is like a war really. Doctors and nurses all over Italy fight on the first lines and they start to take heavy losses”, says Iannucci. “That’s why there is no time to loose and we rush to make this equipment available as soon as possible. For the past few weeks we’ve been working almost 24/7 and we are starting to get really tired”, he adds. As of now, the Open Breath team has both prototypes assembled: the metal one and the one with 3D printed parts sheet. Currently tests are underway to see if all the advanced modes of the ventilator are functioning properly. If everything proves to be alright, the design will be publicly shared for free. 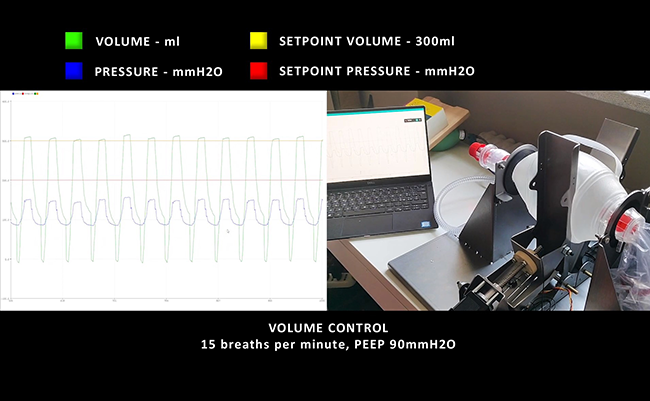 “Even if our work won’t help Italy, I am sure it will help in less fortunate countries where the pandemic is juts gathering momentum. We’ve seen a lot here and we know how it feels to scramble for life-saving equipment”, Iannucci says. “The bottom line is this though. We need to protect our medical staff at all cost. If their numbers drop, if to many of them are gone, you can make as many ventilators as you want. The will do nothing without qualified people to work with them”.