3D printing has a well-established position in the production of low-cost, highly customized end-use items. Many companies follow this approach where, with an idea and a good quality project, they can efficiently realize their visions using additive manufacturing equipment.

One of the companies with a similar business profile is PLM DATA S.r.l.® based in Naples, Italy. It was established by a team of engineers with vast experience in implementing CAD/CAM projects, specializing in prototyping and 3D printing components in small series on request. Over the last several years, the company has participated in multiple projects from different fields by successfully delivering end-use parts for MTB mountain bikes used in the UCI Mountain Bike Championships or the oxygen valves during the first wave of the pandemic.

Recently, PLM DATA S.r.l.® has manufactured components for a sensory lamp, whose main purpose is air quality monitoring. For this case study, the team has shared with us the way 3D printing streamlined their workflow during the production.

Back in January this year, Monica Massera, a Naples-based architect, reached out to the PLM DATA S.r.l.® team and asked them for help with her concept of an innovative sensorial lamp called AQI-NOS. Monica was preparing the piece for an international exhibition “ECHINO DESIGN” held in Naples which was to show the relationship between design, art, and science with formations and structures observed in nature. And in fact, as the architect says: “The project AQI-NOS was inspired and designed from studies and direct observations of ECHINOIDS, that is sea urchins.”

The project of the lamp assumed the use of simple electronics which would detect air quality values and communicate them through a light code signalized by LEDs. All of the electronic components were supposed to be enclosed in a 3D printed housing.
The engineers from the PLM DATA S.r.l.® divided all of the necessary tasks among themselves and began the work on the commission of designing and 3D printing of the lamp’s enclosure. 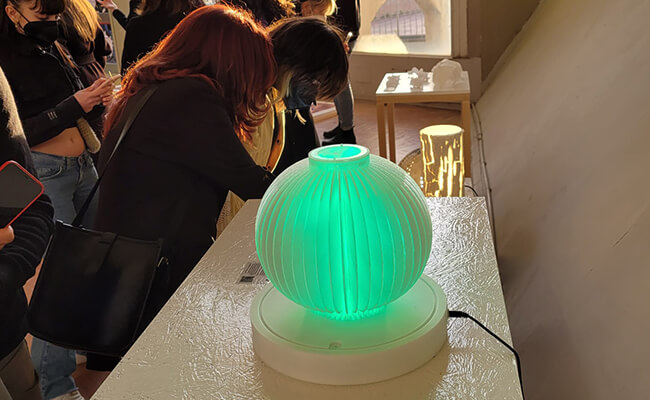 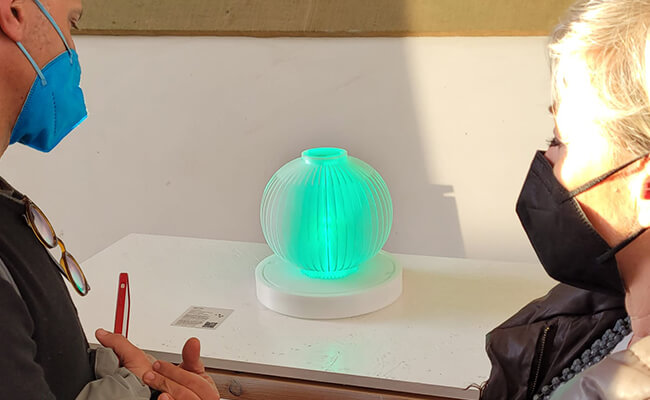 First up, the PLM DATA S.r.l.® experts studied the sketches of the lamp Monica had prepared in the AUTOCAD software to determine all the technical aspects of the project. “We wanted to understand which materials and which printers were the most suitable for model 3D printing and production costs,” – says Andrea Bifulco, a 3D CAD designer at PLM DATA S.r.l.®. 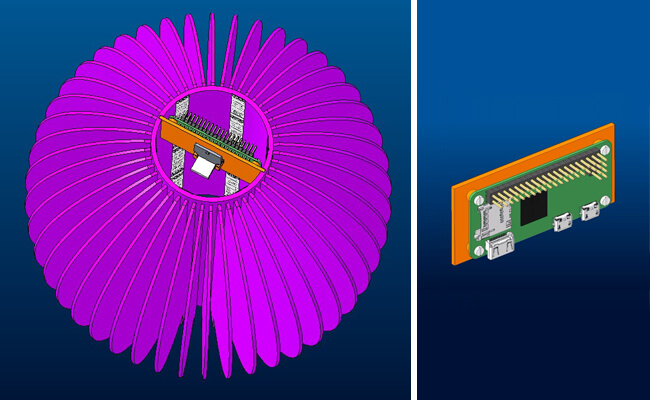 The CAD design showing how the electronic elements would be incorporated in the 3D print.

Next, the designer took care of all the 3D modeling stages by transposing the sketches into the CAD software – PTC Creo Parametric 3D. He re-engineered the lamp and made significant improvements in its design and style. The whole model was divided into the finned cylindrical central body of the lamp with a slot for an air filter and the support base with a housing for the motherboard and the power supply unit.

After modeling, Francesco Verdosci, another member of the PLM DATA S.r.l.® team, moved on to preparing the models in Z-SUITE software and 3D printing them. Because the AQI-NOS lamp was supposed to be 240 mm (9.45 in) high and the support base 260 mm (10.23 in) wide, Francesco chose the large build volume 3D printers: Zortrax M300 Plus and Zortrax M300. This way, the engineer didn’t have to split the components into smaller parts as they easily fitted in the workspace available in the machines. 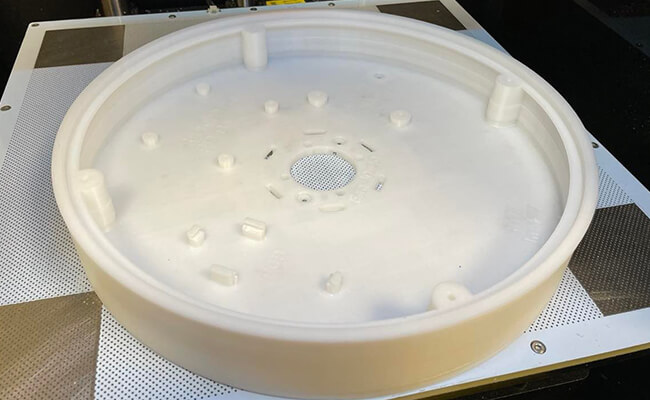 The 3D printing stage of the lamp's finned central body performed on the Zortrax M300 Plus out of Z-GLASS filament.

The 3D printing stage of the lamp's finned central body performed on the Zortrax M300 Plus out of Z-GLASS filament.

The finished 3D model of the lamp's support base.

As for the filaments, Francesco selected Z-HIPS for the support base and Z-GLASS for the central body. Z-HIPS offered good mechanical resistance to protect the electronics installed in the base, whereas Z-GLASS had the aesthetic aspect crucial in this project: “We chose to use Z-GLASS because Monica required a high transparency of the central body of the lamp to have the right light intensity of LEDs inside the model,” – Francesco points out.

Once all the components were ready, the team began to install the electronic elements which were integral for the AQI-NOS lamp operation. Inside the cylindrical finned body, there is an innovative BOSCH BME688 gas detection sensor. It is equipped with a miniaturized artificial intelligence capable of directly detecting “AQI” values – the air quality index. The device identifies the presence of volatile organic compounds (VOCs), volatile sulfur compounds (VSCs) and other gases such as carbon monoxide and hydrogen. The lamp gets illuminated with the use of LEDs also installed inside the central body.

On the left, there is the AQI-NOS lamp after the 3D printing stage. On the right, there is the lamp with all the electronic components installed in the enclosure.

The communication between the sensor and LEDs is guaranteed by the specially programmed Raspberry motherboard. It has an operating system which easily takes temperature, humidity, pressure and air quality readings. There is also a dashboard that can be accessed to see all the stats. The motherboard is installed inside the support base along with the PSU.

As the PLM DATA S.r.l.® emphasizes, 3D printing allowed them to solve some problems during the execution of the AQI-NOS project. To begin with, working with CAD files and rendering them into formats readable by 3D printers let them create a highly customized model and implement any necessary changes whenever it was needed.

Comparing to traditional production methods, 3D printing allowed the team to save time and money as the production took them less than 200 h and they used up only around 2000 g of filament. This wouldn’t have been possible with other methods in such a short time. “With the innovations that have occurred over the years, 3D printing has become increasingly efficient and allows us to work directly on CAD files, significantly reducing the amount of material needed for the component to be manufactured. In addition, we can obviously customize the products we make,” Andrea Bifulco summarized the whole AQI-NOS project.

This case study was put together thanks to our partner PLM DATA S.r.l.® from Italy. See the company’s offer at their website.