Gdański Uniwersytet Medyczny (GUM) is a Polish Medical University educating and conducting scientific research within the fields of Medicine and Healthcare. The Department of Pharmaceutical Chemistry is responsible for teaching the mechanisms of drug functioning, evaluating their properties and unveiling the methods of developing innovative molecules. One of such particles found interesting and worth investigating by the department was a GABA receptor. This is how GUM has developed educational models of this receptor with a Zortrax Inventure 3D printer. 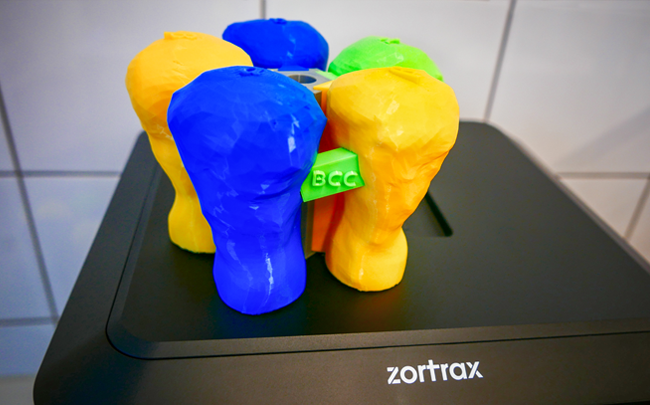 The picture shows the ready model of a GABA receptor on the top of Zortrax Inventure 3D printer used in the project.

Teaching the peculiarities of a GABA receptor to pharmacy students was challenging and tricky because of its structure and the fact that it interacts with many drugs that attach to it at different sites. Each attachment site results in slightly different effects on the body. Students had difficulties visualising the looks of the receptor and the touching points it has, and, consequently, understanding the mechanisms of GABA’s interaction with drugs. The members of a project sought a solution that would allow them to help students comprehend those mechanisms. They knew they needed physical models, but these were impossible to find commercially. Hence, they decided to incorporate Zortrax Inventure 3D printer to their facility and manufacture 3D models to be used during lectures and classes.

“We are convinced that nothing works better than the possibility to touch the model, examine its structure and see for one’s own how something that is normally undetectable by a human eye functions,” points out Marek Belka, PhD, the leader of the project. „As we couldn’t find the models of a GABA receptor anywhere, we turned to 3D printing which allows for a rapid prototyping as well as  cheap and flexible manufacturing of any model with educational purposes,” he adds.

3D Printing the Models of Educational Value: Creating the 3D Prints of a GABA Receptor

The process of creating the models began with finding a 3D structure of a GABA receptor. To do so, the members of the project had searched through Protein Data Bank – the public base of protein structures. Once they had found the accurate skeleton there, they gave it a spatial look, using PyMOL programme. Next, they converted the file to an .stl extension and then uploaded it to Z-SUITE, where it was sliced layer by layer and prepared for 3D printing. The creators selected Z-PLA for the target material because of its durability and eco-friendliness. It is also perfect for 3D printing the models with complex geometries. To get rid of the supports, the ready model was washed in Zortrax DSS Station. Any further post-processing was unnecessary.

This is when the first realistic model, reflecting the real protein in our bodies, was 3D printed with the Inventure.

Then, inspired by its biological structure, the developers designed a simplistic, movable didactic model composed of five subunits: two alpha, two beta and one gamma. To visually distinguish individual models, three different colours of Z-PLA were used here – Blue, Yellow and Green. The space between the subunits in a real structure is depicted as the chloride channel in the 3D model. The students decided it would work best as a hook for the other elements with a hollow space inside.

The 3D model of a GABA receptor includes the elements resembling medicines and toxins reacting with GABA. Here, the project members used simple geometrical shapes to illustrate the substances. Then, they cut out the corresponding spaces in the subunits – due to that, the shapes fit the models perfectly. The elements imitating medicines and toxins were labeled with special symbols and attached to the main model by tiny 2mm magnets.

The video shows the assembling of a GABA model 3D printed with Zortrax Inventure.

LPD Plus 3D Printing in Medicine and Pharmacy: Convenient Manufacturing for Educational Purposes

Operating the Inventure is intuitive and easy as this desktop 3D printer is truly Plug&Play. Even the students, who had never had any contact with LPD Plus technology before quickly learnt how to use the machine.

“The Zortrax Inventure is a good choice for people who do not want to spend a lot of time calibrating their machine. We would recommend it also for the beginners. It will be perfect as the first dual extrusion 3D printer.” says Marek Belka, PhD. The project team also values the multitude of available colours as well as the variety of ready filament profiles, from both Zortrax and the external suppliers. 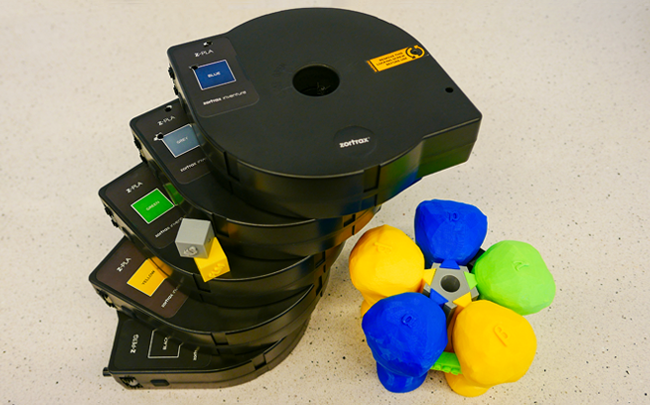 In the picture, there are different colours of a Z-PLA filament and the movable model of a GABA receptor.

A dual extruder 3D printer enables one to create models of intricate shapes in an easy and accessible way. But its application in education within medicine and pharmacy does not end with producing didactic models. The academic staff involved in GUM’s project found it useful also in their day-to-day scientific activities.

“3D printing technology has lain in our interest for quite some time – beside creating didactic models for students, it caught our attention also as a great tool for our own scientific growth. We deal with developing new analytical methods crucial for solving problems in medicine and pharmacy daily. 3D printing is the only available tool allowing us to design, manufacture and perfect the elements of measuring systems,” Marek Belka, PhD, points out. 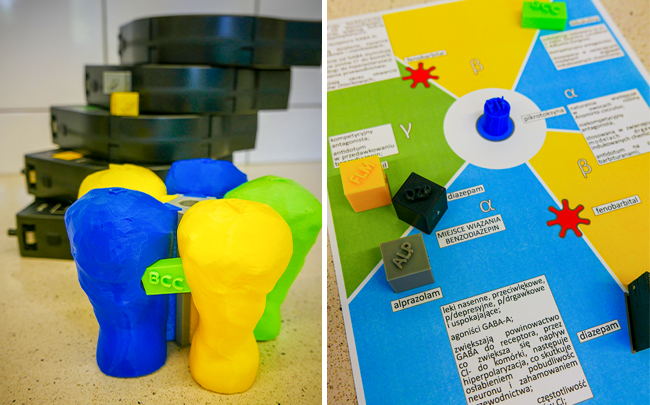 The picture shows a 3D printed didactic model of a GABA receptor (left) and a didactic poster supplementing the model (right).

The experience gained during the project has made the students realize how versatile and flexible 3D printing technology really is. The models of GABA will support the processes of both learning and teaching pharmacy and medicine-related topics for many academic years to come. They are also going to constitute a starting point for the in-class discussions about the applications of 3D printing in pharmacy and the related areas, raising the students’ awareness of new technologies out there.

Get to know other LPD Plus 3D printers in Zortrax offer.

Read about other applications of Zortrax 3D printers on our blog.

Do not miss our Black Week promo! Visit Zortrax Online Store since November, 26 to December, 3, to get the best deal.