Zortrax research and development team has reached a major milestone on the road towards 3D printing smart, composite components out of two high performance polymers on the Endureal, our dual extrusion industrial 3D printer. Proof-of-concept models with energy and data transfer features have been successfully fabricated with a combination of pure PEEK and experimental, electrically conductive blend of PEEK developed by the European Space Agency.

Here’s why this is a major breakthrough for aerospace and space industries.

High-performance polymers like Z-PEI 9085 or PEEK-based materials offer excellent thermal and mechanical properties comparable to metal alloys. They are commonly used in aerospace engineering and space exploration. PEEK, which stands for poly ether ether ketone has been already extensively tested by JAXA, the Japanese space agency. Samples of PEEK have passed thermal cycling, vibration, and radiation tests with flying colors. They have even been exposed to open space for months during the MPAC & SEED experiment onboard the International Space Station. But the engineers working at the European Space Research and Technology Centre (ESTEC) figured out ways to get even more out this materials.

Back in 2018, the ESTEC team published a research paper describing an electrically conductive PEEK 3D printing filament. This way, PEEK, which normally is not a conductor, has been redesigned to work as an energy or data transfer material. The team achieved this through mixing PEEK with carbon nanotubes and graphite nanoparticles in just the right proportions to facilitate conductivity. The only missing piece was a 3D printer that could work with this material to make conductive paths in a standard PEEK body. Since there was no such 3D printer on the market, Zortrax launched a research project to make this work. And this research project has just turned successful.

Specs out of Space

The Endureal was the obvious choice for a hardware platform, considering the requirements a 3D printer has to meet to print with high-performance polymers. Zortrax engineering team managed to increase the rigidity of the extrusion system which translated into even better dimensional accuracy. This was even more of a challenge, since both nozzles working on the model had to maintain stable position relative to each other throughout the entire printing process. 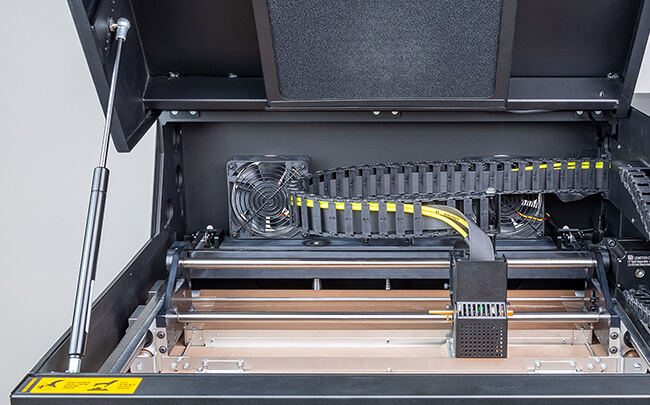 The Endureal extruder’s compartment is thermally isolated form the heated printing chamber placed right beneath it.

Other hardware improvements resulted in the Endureal’s reaching even higher operating temperatures. The top extrusion temperature now stands at 480° C. Maximum temperatures in the printing chamber and on the build platform can reach 200° C and 220° C, respectively, to further reduce warping and shrinkage of high performance materials. Moreover, each of these temperatures can be precisely defined by the user. 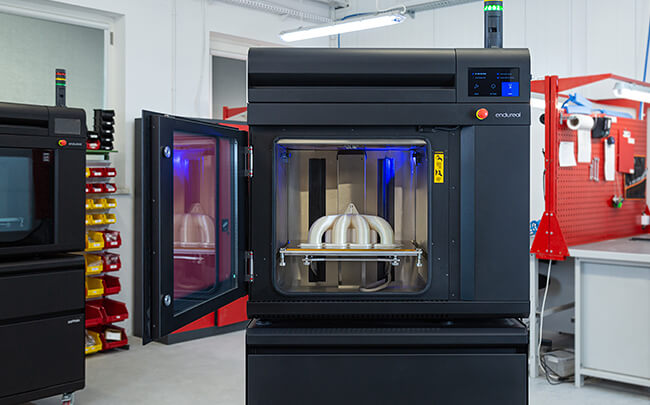 Zortrax Endureal has a large, class-leading build volume compared to other 3D printers capable of working with PEEK-based materials.

But that’s not all. Compared to other 3D printers capable of processing PEEK-based materials, the Endureal has a very large build space measuring 400 x 300 x 300 millimeters. This means that the machine can accommodate entire 1U and 2U nano satellites if necessary. All those specs make the Endureal a perfect 3D printer for aerospace and space applications. And that’s even without the with the entirely new approach to dual extrusion.

Dual extrusion technology enables a 3D printer to work interchangeably with two materials. The extrusion system switches between two separate nozzles to deposit the right material at the right spots. So far, we have been using it to build models out of one material, and support structures out of the other. This way we could make the post-processing easier by printing the supports out of soluble or brittle materials like Z-SUPPORT ATP or Z-SUPPORT HT. But in this case, we have taken this technology way beyond just that. 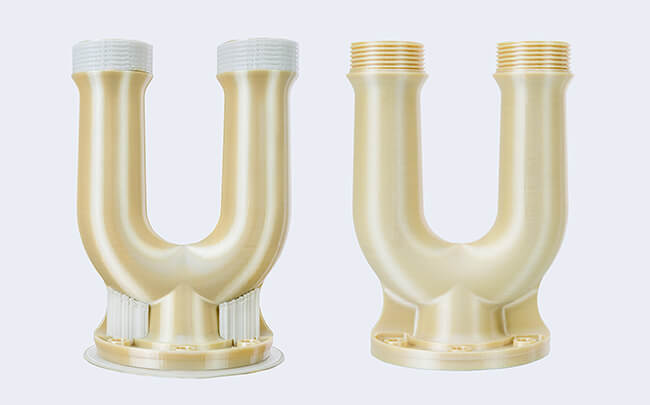 A Z-PEI 9085 model 3D printed on the Endureal in dual extrusion. The model prior to removal of breakaway supports printed with Z-SUPPORT HT on the left. Same model with supports removed on the right.

Imagine an X-ray scan of an electronic device. There would be wires and circuits clearly visible inside a plastic case. We wanted engineers working in high-tech industries to have a capability to design the circuitry and wiring layout, embed it all in a polymer body, and have it 3D printed in one go on a 3D printer. And we wanted such devices to have all steel-like properties found in polymers like PEEK. Basically we aimed at printing components with simple energy and data transfer features that could withstand exposure to space environment. 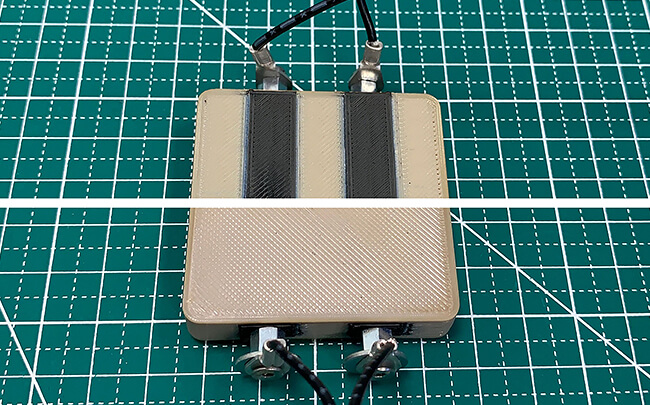 A composite model with conductive paths visible at the top and fully embedded in PEEK body at the bottom.

To achieve that we have redefined the way dual extrusion works. Instead of printing models and supports out of separate materials, we built defined which parts of the model should be printed with which material. And since we wanted it all done with high-performance filaments, we asked ESA to let us try doing it with their electrically conductive PEEK. And we have succeeded.

Building composite models out of two high-performance polymers opens up a world of possibilities in the aerospace and space sectors. Energy and data transfer features are just the beginning. We have already tested our models and achieved 9600 bit/s transfer rates through paths 3D printed with the ESA’s conductive PEEK over the RS-232 protocol which is more that enough to handle emergencies in space.

In the future, the same technology can be used for the so called 4D printing, where the fourth dimension is time. For example, there are materials that change their properties in response to changes in temperature or electric current. It is therefore possible to print functional manipulators that actuate automatically when the temperature around them exceeds a certain threshold or on demand when the electric current is applied to them. 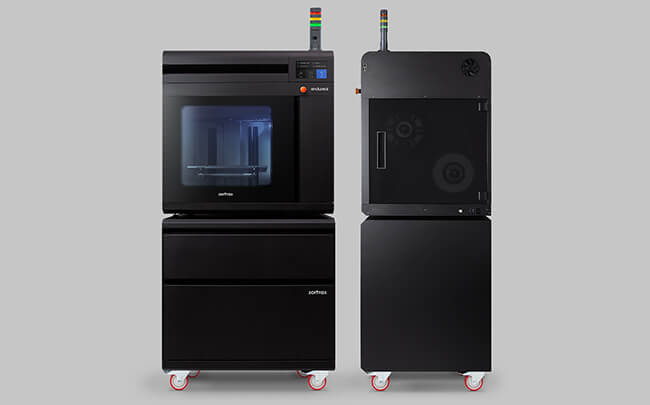 Composite models 3D printed with PEEK and conductive PEEK developed by ESA have been 3D printed on a standard Zortrax Endureal machine with no custom modifications.

But perhaps the most important thing about the Endureal is that it is hardware-ready to support all of those features and more. This is because our research and development team works on the Endureals with a standard hardware configuration that are commercially available to customers. We’re not using tweaked or modified printers in our research projects. We’re working with the same gear we sell to our customers. And this means that when composite dual extrusion 3D printing and other exciting technologies we have in the pipeline reach the production level, they are going to be released to the market through a simple software update.

The view expressed herein can in no way be taken to reflect the official opinion of the European Space Agency.