Duecinquanta, an Italian word for “250”, is a performance motorbike designed by Vins Motors, a company based in Maranello, Italy, founded by former Ferrari engineers. Carbon fiber chassis, innovative aerodynamics, and a revolutionary 2-stroke engine built from scratch specifically for this machine are but a few examples of what rapid prototyping can accomplish in automotive industry. “I wanted to see, to touch, every single part coming off the drawing board. 3D printing with the Zortrax M300 made that possible”, says Vincenzo Mattia, CEO and founder of Vins Motors. In the world of motorbikes, Duecinquanta stands for everything Ferrari stands for in the world of cars. It’s all about riding experience, about beauty, and about pure joy.

Mattia started to think about building a motorbike 6 years ago. His initial ideas were influenced by aerodynamic shapes of iconic airplanes like P51 Mustang and extremely efficient simplicity of Lotus’ design philosophy. “I wondered what would a motorcycle look like if it had been light like a Lotus, designed like an airplane, and made like a Ferrari”, he says. Wondering quickly led to first sketches drawn on the back of a newspaper. Duecinquanta was supposed to be light, simple, and beautiful. And Mattia has followed all of this through. Dueacinquanta is simple, made of 40% less parts than a standard motorbike, elegantly designed, and devilishly fast. “That was ambitious. In automotive industry simplicity is very hard to accomplish”, claims the CEO.

Vins Motors defined their design goals. First, Duecinquanta had to be as light as possible. “Adding power makes you faster on straights. Subtracting weight makes you faster everywhere”, says Mattia. Each part had to perform at least two functions. There was no place for redundancy. Also, the chassis was to be made almost entirely of carbon fiber. Second, the motorcycle needed a small and light yet powerful engine. Vins Motors wanted to build it from the ground up—none of the off-the-shelf engines held up to their standards. So in a bold move the company decided to go for a two-stroke engine, a design used in racing motorcycles of old and dropped by the manufacturers who favored cleaner, safer, and more reliable four-strokes. Valentino Rossi, an Italian Moto GP racing legend, won his first 500GP title on a Honda NSR500 back in 2001. It was the last Grand Prix won by a two-stroke. Vins wanted to bring this heritage design back to life.

“Usually when you run a start-up in automotive industry, you take a ready made engine from one of the main manufacturers and build everything else around it. We took a different course”, says Mattia. He began with the geometry of the machine, the chassis, the aerodynamics, and the suspension. He knew people had to understand the design to find it appealing. That’s why Duecinquanta has no external wings or other features attached with a sole purpose of shaping the way air moves around the machine and into the radiator. “Our architecture channels air through internal ducts getting it into the radiator and generating downforce. There are no wings spoiling the design. The entire chassis works like a wing”, says Mattia. According to him, this solution is inspired by P51 Mustang. “One of the most beautiful planes ever made. When you look at it, the air intake is placed on the bottom. We arranged things similarly, only you’d need to look at it upside down”, Mattia explains.

In a standard motorcycle the radiator is placed behind the from wheel. It has to be relatively large because airflow is blocked by the wheel, and the front fork. “In Duecinquanta, the radiator is above the front wheel. This way we could use smaller, more efficient, and lighter radiator. Additionally, air flowing inside improves overall aerodynamics. That’s our one part two functions philosophy in action”, says the CEO. Same thing applies to everything else in Duecinquanta. The rear element Vins calls “traversino” performs three functions. First, it works as an air duct. Second, it supports the rear suspension. Third, it shields the rear damper from the hot air coming off the engine.

Once the chassis was done, the engineers started designing an engine. In comparison with four-strokes, a two-stroke offered more power from equal displacement, less weight, and easier servicing as it had less moving parts inside. But the key players in automotive industry ditched two-strokes for good reasons. Such engines had way shorter service life, increased fuel consumption, vey high emissions, and a very narrow power band. Vins Motors however, pledged to make a new kind of two-stroke that would mitigate the downsides without compromising the advantages. All parts of both the chassis and the engine were designed in CAD software and 3D printed. “Rapid prototyping was crucial. We could freely iterate on each design till we got it exactly right”, says Mattia. 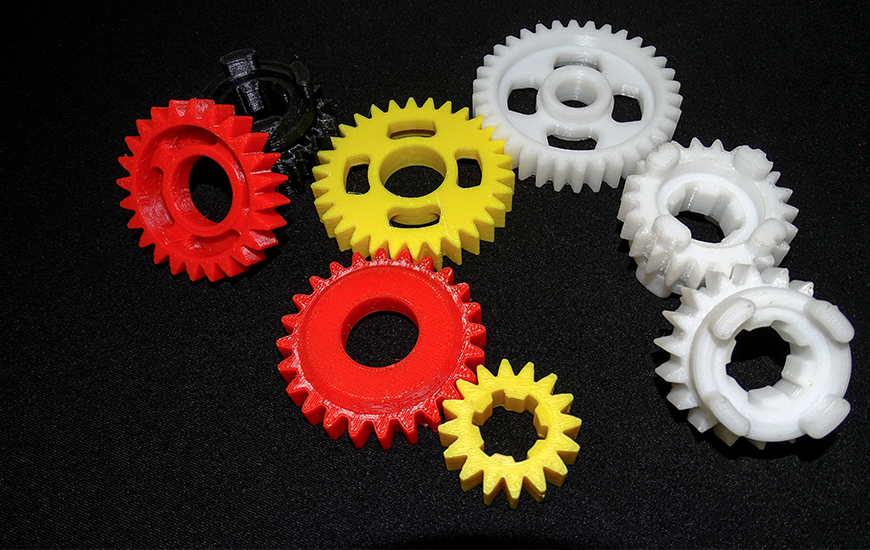 During the prototyping phase, Vins Motors 3D printed enough parts to make an entire full-scale model of Duecinquanta. It actually came in handy when Vins exhibited Duecinquanta at ECIMA 2017, an international motorcycles’ fair. “Back then we had only one engine so we disassembled it for visitors to see all the parts separately. Still we needed engines for motorcycles we brought there with us. So we simply assembled models using 3D printed parts and fitted those in machines on display”, says the CEO. 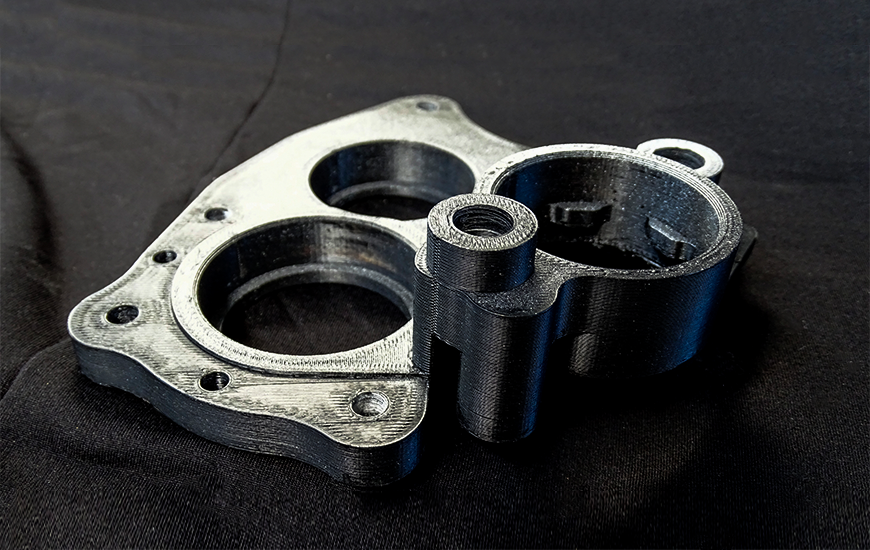 An end-use part for the Duecinquanta’s engine. Credits: Vins Motors.

For exhibitions, Vins predominantly uses models 3D printed with Z-HIPS and Z-ABS. “Those get you the best looking, most precise results”, claims Mattia. But the company also used the Zortrax M300’s ability to work with third-party materials. “For testing we usually 3D print parts with PBT, a thermoplastic that is particularly resistant to fuels and oils commonly used at our factory”, says Mattia. PBT also shrinks very little during forming, is mechanically strong, and can withstand high temperatures. It exhibits properties similar to Z-PETG.

All this work has led to the machine the automotive industry has never seen before. Duecinquanta comes with a standard 250cc engine in its road-legal version and slightly larger, 288cc engine for a more extreme Duecinquanta Competizione meant solely for the track. The engine generates 85hp while the weight of the motorcycle has been brought down to around 80 kg which results in more or less 1hp/1kg power to weight ratio. To put that in perspective, a standard motorbike with the same engine capacity has around 40hp and weights 180kg. “What it means is that in Duecinquanta everything comes instantly. You have instant power, instant throttle response, instant acceleration”, explains Mattia. Because of its specs, the machine is particularly agile and fast round the corners. All this justifies a price tag. Vins want to charge 40,000 euros for street legal bike and 50,000 euros for Competizione. “Every Duecinquanta will be hand-made and fine-tuned by our engineers”, says the CEO. 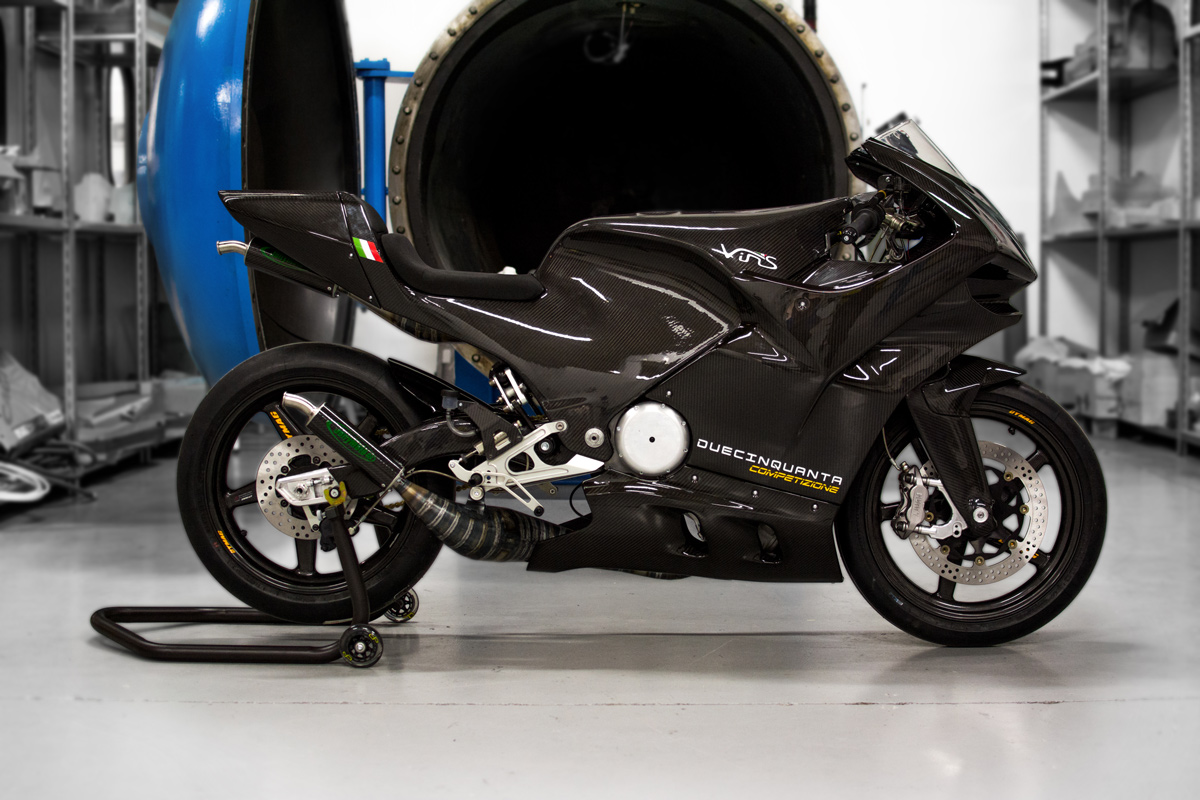 “Of course we were considering alternative technologies for prototyping”, claims Mattia.  There are many ways to build a prototype. Casting, sand molding, CNC milling, or even old-school modeling in clay. “But the greatest advantage of 3D printing is precision. It’s a very precise technique. What’s more, the printer works unsupervised. You can do other things in the meantime”, he adds. According to Mattia, a 3D printer offers a completely automated process. You just push a button and it just works on its own from start to finish. “Moreover, a 3D printer is very clean, simple, and easy to use. Very user-friendly. You don’t have to be qualified to run it. From this perspective, 3D printing beats CNS milling and other available techniques”, says Mattia. And when it came to choosing the right 3D printer, he certainly did his homework.

“I searched for the machine that would meet my expectations, googled a lot. Which printer could work best for my purpose, which was the best for me? I browsed through different 3D printers. Zortrax M300 was one of the printers I read about. I also saw some reviews on YouTube”, says Mattia. “Then, one of my former colleagues at Ferrari weighted in on the matter. They were already using Zortraxes at Ferrari. He showed me some of his prints and I decided to get this 3D printer form myself”.