3D printing farms seem to be the future of manufacturing. Racks of tens, hundreds, or even thousands of 3D printers working together can yield a significant production output. A typical FDM 3D printer can use up a 1 kg spool of filament in about two, maybe three days. A farm of 100 such 3D printers can make 30 to 50 kg of models daily. That’s about 1.5 tonne per month. If you’re making hand watches that’s over 20 thousand units. But large factories can easily make millions of them in the same time. So does a 3D printing farm make any sense? Yes it does. Here’s why.

It takes lots of time and money to gear up a large production plant for mass producing a particular product. A more or less complex assembly line has to be set up and once it’s done it’s hard to make adjustments. Factories are like supertankers in a way. They are huge but it takes ages to get them up to speed, to slow them down, and to change their course.

Moreover, using traditional manufacturing techniques makes economical sense only when you want to produce a vast number of the same, standardized products. There’s no place for customization. And no way to react when the product isn’t doing well on the market. Manufacturing issues are usually among top 3 challenges facing a startup with a promising idea. You can either go all in and order 200,000 units upfront, or drop the idea altogether because your cost per unit would be absurdly high if you ordered less than that. With a 3D printing farm it’s an entirely different story.

Additive manufacturing is more expensive when it comes to mass production. But it is more flexible. Cost per unit is constant. It does not depend on how many units you want to make. But there are more advantages. Because it costs nothing to have each of your 3D printers making an entirely different thing, you can offer extremely personalized products to your customers without additional costs. Think of hand watches that customers can order in myriads of possible shapes and designs at a price of a standard mass produced watch available at every shopping mall. A 3D printing farm is also more forgiving to mistakes made at the product development stage. If the product made in a 3D printing farm does not work as intended, it is possible to make instant changes in its design, and have the updated version manufactured without the need to rewire the entire assembly line. But even more can be achieved when 3D printing farms complement traditional manufacturing techniques instead of trying to replace them.

A typical product development cycle begins with an innovative idea that then goes on to the prototyping stage. Once the prototype is perfected, things become a little tricky. Is the product ready for manufacturing? Is it going to resonate well with its target audience? Those are though calls to make that can make or break a newly born company. There is a gap between making something in small quantities and mass producing the same thing. The concept of bridge manufacturing has been conceived to, well, bridge that gap. A 3D printing farm is a manufacturing means that can make it easier for a company to ship, say, a 10,000 products at a reasonable price. Once the product hits the market and proves successful, it goes to mass production in traditional factories to take advantage of the economics of scale. At the same time, the 3D printing farm is busy bridging the gap for another new product. And this is a trick even big, global players want to have up their sleeves. 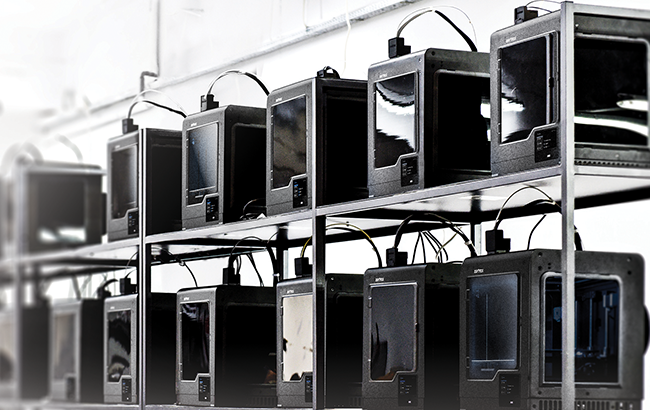 According to Forbes, 3D printing operations are already in place at Porsche, GE, Caterpillar, Ford, or Boeing. All those companies aim to build low-volume manufacturing facilities with racks of working 3D printers at their large production plants. They are doing it because bridge manufacturing makes sense even if you’re a big business. Infallibility doesn’t come with size. If anything, the consequences of failure can be even harsher if it was preceded by significant investments. It’s only reasonable to probe the waters first and have something done in a 3D printing farm that can be rewired to make anything else in seconds at no cost. This way 3D printing farms can reduce the risk of going big with a new product right off the bat.

Factories of the Future

Modern FDM 3D printers are pretty close to the limits imposed by physics. They can’t be made to work radically faster or more precise. So even working in large 3D printing farms they are unlikely to completely replace traditional factories. Their output is too low and they are to expensive to make millions of parts per month. But the 3D printing farms will occupy two distinct niches. First of those niches is the market for highly customized goods. There is an ongoing shift from one size fits all to one size fits one philosophy. Customers want their products to be more and more personal. 3D printers can’t beat large factories in making millions of identical watches. But they will strive when each of those watches is supposed to be different from others. The second niche is auxiliary production i.e. bridging the gap between prototype and mass production phase in product development cycle.

Last but not least, there are new 3D printing technologies on the rise that don’t have the limitations of FDM. Resin 3D printers can get a lot faster and orders of magnitude more precise than those working in FDM technology. Farms with multiple resin 3D printers working together open up entirely new possibilities in precision engineering, jewelry, dental prosthetics, art and entertainment. They can make wonderful, personalized products at surprisingly large scales. Their future depends on wether there is going to be a demand for what they can do. The search for the 3D printing killer app is on.