Disabled athletes are among the most affected by the rise of affordable 3D printing technology as they usually need heavily personalized equipment. “We are working to design a hand bike handle for Florian Jouanny, the first tetraplegic European who managed to finish the Ironman Triathlon”, says Clement Jacquelin, the CEO of Athletics 3D, a French company making equipment for professional athletes. “3D printers have been crucial in getting this done”, he adds.

Back in 2011, a skiing accident left Jouanny almost entirely paralyzed with only parts of his hands functioning. “Florian can use his forearms, triceps, and hands to some extent, although his grip is significantly weaker than normal. He can’t press with his fingers, but can make pushing movements”, explains Jacquelin. The goal of the Athletics 3D team was to improve the rate at which force Jouanny could generate with his hands translated into energy driving his bike.

“We actually measured this energy in Watts. This way we could tell if we were making progress or not. What we were after was improving the energy-efficiency of the whole system consisting of the bike and the athlete”, says Jacquelin. Under such defined constraints, engineers at Athletics 3D came up with a design that even at the prototype stage outperformed the standard handle Jouanny had used before. Working on ergonomics and the right fit tailored to Jouanny’s particular kind of disability was one thing. Making the 3D printed handle durable was quite another.

Why Ironman Triathlon is Challenging?

The Ironman Triathlon is one of the most difficult competitions on the planet. Participants begin with a 2.4 miles long swim. Once this is completed, they switch to bicycles and go for a 112 miles race. The last in line is running the full 26.22 miles long marathon. All of this has to be completed in 16 to 17 hours, depending on the course. Jouanny completed this race twice. He was the second tetraplegic person to do so in the world. He clocked in at around 15 hours, despite a tire running flat in his wheelchair during the marathon part. He went through the last 12 miles or so pushing the tireless rim. 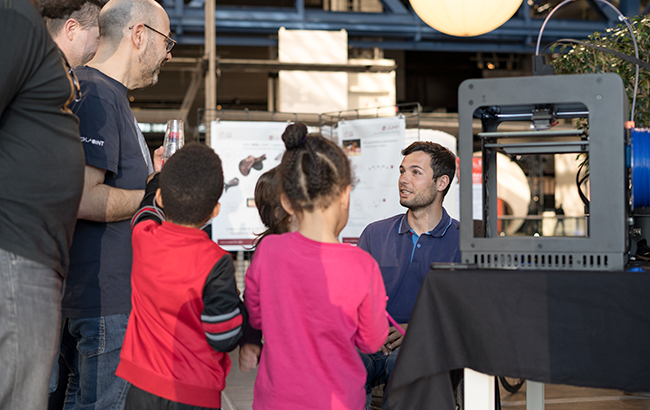 “That’s pretty tough and the equipment used in such competitions has to endure it all”, says Jacquelin. According to him, the company has the handle design nailed at the moment and is now looking for the right materials to make the end-use product. They started with Z-ABS to print it on their Zortrax M200 3D printer, then moved to Z-PETG filaments. “However, those proved to be too weak for pushing a bike forward for 112 miles. One of the early prototypes got broken pretty fast so we had to deal with it somehow”, says Jacquelin. Finally, the Athletics 3D settled for prototyping with Z-ULTRAT.

Handling Product Development Over the Web

3D printers allowed to quickly iterate through various designs but there is one more thing they also made possible. “I could take an active part in designing my handle”, says Jouanny. “Clement let me use the Zortrax M200 3D printer for a couple of weeks at home. This way, I could print my own prototypes out of Z-ULTRAT”, he adds. According to Jouanny, he realized there was lots of potential in his hands that had gone untapped due to the lack of grip. “Now I feel like I can pedal more efficiently because the new handle is designed specifically for my kind of disability”, he adds. With a 3D printer set up at Jouanny’s home, Athletics 3D could facilitate a more cooperative relationship with the customer. 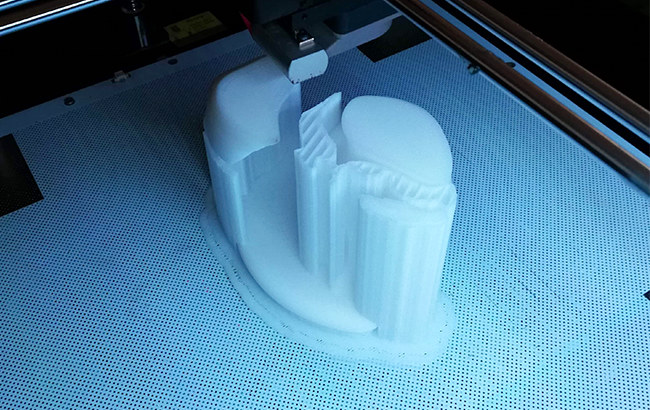 Prototype of the Jouanny’s handle being 3D printed with Z-ULTRAT on the Zortrax M200.

Whenever the team came up with an improved design, they sent .stl files to Jouanny. This way he could have the latest version of the handle as soon as it got out of the printer. “When the model was successfully printed, I was just taking it out for a spin. Each time I pedaled through a couple of miles with it and got back to Clement with my feedback”, says Jouanny.

Athletics 3D works with Jouanny to get the handle just right for the September Para-cycling World Championships 2019 in Emmen, Netherlands. “Florian is a two times French hand bike champion, so he certainly is a force to be reckoned with”, says Jacquelin. “We have all the reasons to believe with a right equipment he can aim for results that will qualify him to the next Paralympics”, he adds. While it seems like there is little time left to the championships, 3D printers employed for both rapid prototyping and manufacturing of the end product make meeting the deadline possible.

Florian Jouanny (on the left) and Clement Jacquelin (on the right) at Cité des Sciences et de l’Industrie in Paris.

“And we are going to take it even further. We are going to see how the 3D printed handle performs in Emmen, and use this experience to design an even better one for the Tokyo 2020 Summer Paralympics“, says Jacquelin.